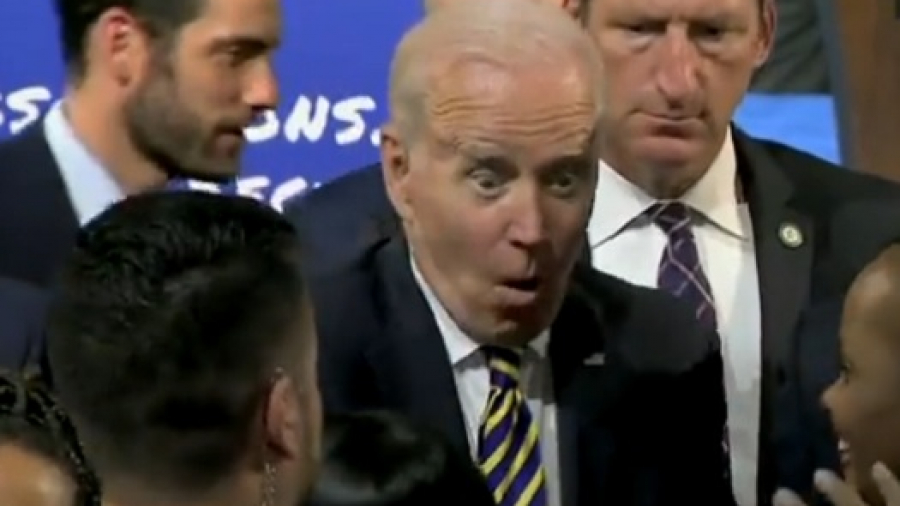 President Joe Biden has a well-established track record for being a creepy dude. He’s like the drunk uncle that comes to all of the family reunions and is always inappropriately touching the female cousins while they’re dipping into the coleslaw. Biden has been caught on video numerous times in photos and video, inappropriately sniffing kids and putting his hands in weird places on them. A very hands-on guy, that Joe Biden.

According to the Daily Political News Wire, Biden, during an event in the state of Pennsylvania, once again took an opportunity to make himself look like a creepy, perverted grandfather by making some very strange, inappropriate remarks to a 9-year-old girl.

Apparently, while the event was going on, Biden talked about “bringing people together,” while also slamming MAGA GOP members and the riot that happened on January 6th, which seems to be his favorite topic to discuss in public.

“Let me say this to my MAGA Republican friends in Congress: Don’t tell me you support law enforcement if you won’t condemn what happened on the 6th,” Pres. Biden says during a speech in Pennsylvania.

“For God’s sake, whose side are you on?” he adds. pic.twitter.com/2RqUWoTvS5

The president then told a pretty weird story, probably made up or fragments of a bunch of different memories his Swiss cheese brain slapped together, about “The East Side” and how you might go about finding the “best basketball team in the state.” I don’t think anyone in the audience has a clue what this guy is even talking about.

“There’s a place where I was the only white guy that worked as a lifeguard down in that area, on the East side. And you know, you could always tell where the best basketball in the state is.” pic.twitter.com/xDWi7nE4KD

And yet, despite all of his wild storytelling, Biden managed to wander off topic and single out a kid in the audience and become Creepy Uncle Joe. What did he say you ask? I’ll tell you, but man, it’s strange, so be prepared.

Biden: “How are you baby? How old are you? … Almost double figures!” pic.twitter.com/UKuk0ECCQh

Biden is the epitome of what is called a “dirty old man”.

Joe Biden is an odd duck. You have to feel bad for this kid. It’s pretty reasonable to assume they didn’t want the President of the United States to call them out in the middle of this little speech and embarrass her by calling her “baby,” in a video that has gone all over the Internet. Imagine the flack she probably got from her classmates the following day. Yikes. Kids can be cruel.

Again, Biden has a long history of making inappropriate comments like this and groping women and children. If it were an isolated incident, one could probably just write it off, but not with a guy who has an established reputation for being far too touchy-touchy.

Maureen Callahan wrote a piece for the NY Post back in 2019 about how weird and gross Joe Biden’s groping is and why it should have prevented him from being in the 2020 race. If only, right?

Here are some examples Callahan cites in the article:

In 2015, Biden massaged the shoulders of Ash Carter’s wife, Stephanie, during Carter’s swearing in as defense secretary; Carter actually turned, mid-speech, and put his own hand on his wife’s shoulder to make Biden step away. And though Stephanie wrote an essay for Medium defending Biden for comforting her as she was “uncharacteristically nervous,” many women watching were made extremely uncomfortable.

During Sen. Chris Coons’ swearing in earlier that same year, Biden leaned down, cooed in his 13-year-old daughter’s ear and kissed her, all as the girl kept pulling away. Her mother had to tap Biden’s shoulder several times to force him back. In an interview that followed with Fox News Sunday host Chris Wallace, Coons similarly downplayed what we all saw.

It’s enough to give you the willies, isn’t it? Can you imagine being married to this guy and seeing him constantly touching other women on the news? It’s got to make the first lady just a little curious as to what the old man’s been doing beyond closed doors and on trips across the country all these years.

Source
What Joe Biden Said To 9-Year-Old In The Audience Is Beyond Creepy is written by michael for trendingpolitics.com