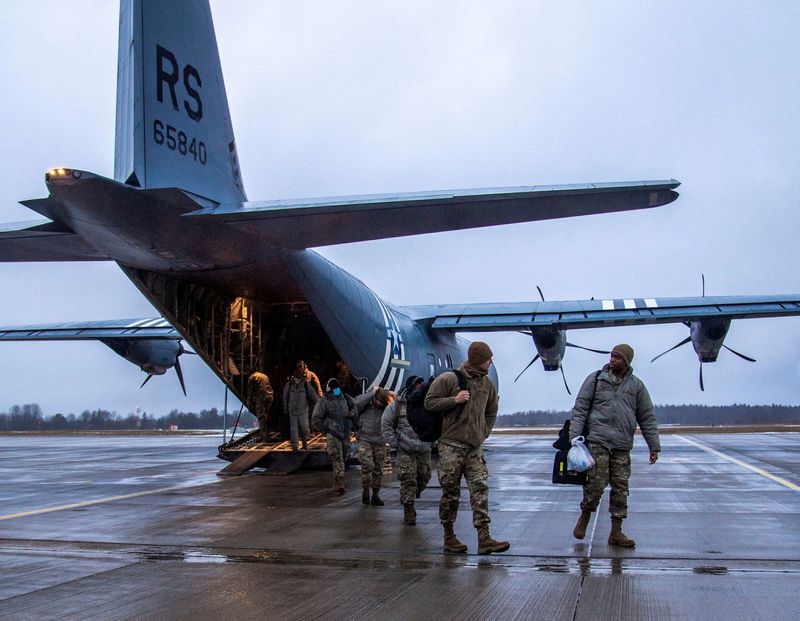 NATO allies are putting forces on standby and sending reinforcements to eastern Europe in response to Russia’s buildup of more than 100,000 troops on Ukraine’s borders.

Here are some of the dilemmas about NATO’s next steps.

WILL NATO COME TO UKRAINE’S DEFENCE?

Not militarily. Ukraine is not a member of NATO and the alliance is not treaty-bound to defend it. Joe Biden has said he will not send American or allied troops to fight Russia in Ukraine.

However, Kyiv is a close partner and was promised eventual membership of the alliance at a NATO summit in 2008.

For the moment, the 30-member North Atlantic Treaty Organization is working with Ukraine to modernize its armed forces. Canada operates a training program in Ukraine, while Denmark is also stepping up efforts to bring Ukraine’s military up to NATO standards. The alliance has also said it will help Ukraine defend against cyber attacks and is providing secure communications equipment for military command.

WHAT ABOUT ARMING UKRAINE?

The United States, Britain and the Baltic states are sending weapons to Ukraine, including anti-tank missiles, small arms and boats. Turkey has sold drones to Ukraine that the Ukrainian military has used in eastern Ukraine against Russian-backed separatists.

However, Germany is against sending arms to Ukraine. Berlin has instead promised a complete field hospital and the necessary training for Ukrainian troops to operate it, worth about $6 million.

SO WHY IS NATO PUTTING FORCES ON STANDBY?

The alliance is concerned about a potential spillover from any conflict between Russia and Ukraine, particularly in the Black Sea region, where Russia annexed Crimea in 2014, and in the Baltic Sea.

The U.S. Department of Defense has put about 8,500 American troops on heightened alert. Denmark is sending a frigate to the Baltic Sea and four F-16 warplanes to Lithuania. Spain has sent a minesweeper and a frigate to join NATO naval forces in the Mediterranean and the Black Sea.

Madrid is also considering sending fighter jets to Bulgaria, while the Netherlands has also offered two F-35 warplanes to Bulgaria from April.

France may send troops to Romania under NATO command.

WHY ARE ALLIES NOT MOVING MORE QUICKLY?

Russia says it has no intention of invading Ukraine.

NATO, which is both a political and military organization, has offered more talks with Moscow in the format of the NATO-Russia Council in Brussels to find a solution.

Moreover, as an alliance of 30 countries with different priorities, decisions are taken collectively and it can take time to drum up the necessary troops for joint missions.

NATO allies are discussing whether to increase the number of troops rotating through eastern Europe. They will focus on the issue when allied defense ministers meet for a scheduled meeting in Brussels in mid-February.

NATO has four multinational battalion-size battlegroups, or some 4,000 soldiers, led by Canada, Germany, Britain and the United States in Latvia, Lithuania, Estonia and Poland.

The troops serve as a “trip wire” for NATO’s 40,000-strong response force to come in quickly and bring more U.S. troops and weapons from across the Atlantic.

The biggest decisions may not come until June, when NATO leaders are due to meet for a summit in Madrid. They are expected to agree a new master plan, called a Strategic Concept, in part to cement NATO’s focus on deterring Russia.

WHAT IS NATO LIKELY TO DO IN THE BLACK SEA?

Bulgaria’s government has said it is ready to stand up a 1,000-strong force in the country, under Bulgarian command and in close cooperation with NATO, possibly with some soldiers from other allied countries.

It could be formed by April or May.

The Western alliance has a multinational land force of up to 4,000 troops in Romania. The United States also has soldiers stationed at separate bases in Romania and in Bulgaria.

Romania could see a bigger NATO presence, after France offered more troops. Romania is in talks with the United States over increasing troop numbers on its soil.

Although operational since 2017, the multinational force in Romania remains only a land command, without immediate air, maritime or special forces.

Source
What are NATO’s next steps if Russia invades Ukraine? is written by Wolf Daily for wolfdaily.com