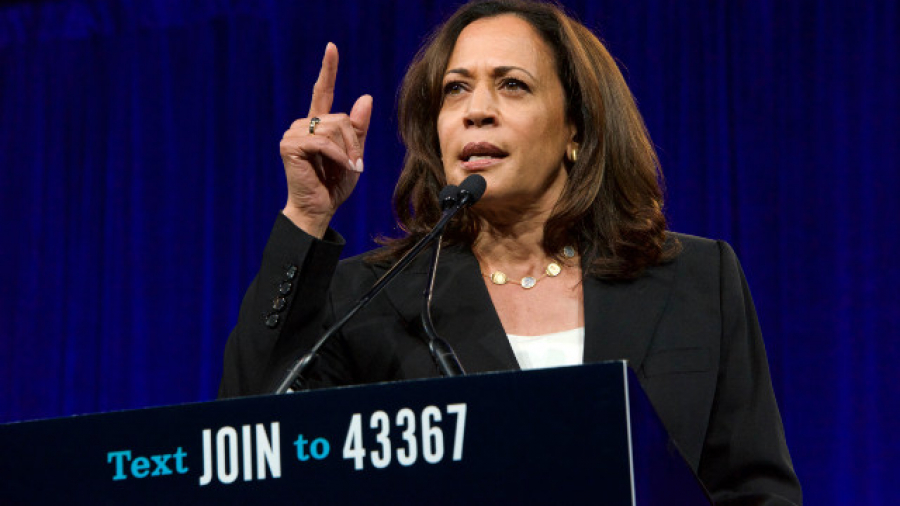 Vice President Kamala Harris continues to prove that when it comes to being ditzy, she’s the queen, which is something we’ve all noticed ever since the Biden administration came into power over a year-and-a-half ago.

She’s been known for delivering word salads that make little to no sense when she’s asked about hot button issues during interviews and for bursting into laughter at very inappropriate times.

And Harris has embarrassed herself again by doing an entire half hour interview in New Orleans beneath a White House graphic that had “Louisiana” misspelled.

What’s even more humiliating is that nothing was even said about it during the entire length of the interview.

According to Fox News, “Harris was in Louisiana over the weekend to attend Essence Fest, a music festival and political event focused on social issues, particularly those affecting Black women. Harris participated in a 30-minute interview at the event, and social media mocked her for sitting under a sign that misspelled Louisiana right under the vice presidential seal.”

And, as with so many other things, social media users were quick to comment on the misspelling of the state’s name.

“It’s a perfect metaphor for her entire administration,” one Twitter user said in response to the goof.

“We have to recognize we’re a nation that was founded on certain principles that are — that are grounded in the concept of freedom and liberty,” Harris went on to say during the interview. “We also know that we’ve had a history in this country of government — trying to claim ownership over human bodies.”

Just a few weeks ago, the vice president caught significant flack for a number of remarks she made while conducting an interview with CNN.

During the interview with host Dana Bash, it seems Harris got stumped after being asked a question on the topic of abortion, according to the Daily Wire.

“You’re saying now, the President said that this fall Roe is on the ballot,” Bash stated during the interview. “But what do you say to Democratic voters who argue, ‘wait a minute, we worked really hard to elect a Democratic president and vice president, Democratic led House, a Democratic led Senate? Do it now.’”

“But do what now? What now?” Harris then asked in response. “I mean, we need, we listen, what we did, we extended the Child Tax Credit for the first year.”

Kamala Harris is stumped when asked why Democrats have not passed “abortion rights” — allegedly one of their top issues — despite controlling Congress and the White House:

There’s no way this woman should ever be allowed anywhere near a microphone. Imagine if, for whatever reason, Harris became the president in place of Biden. Just think about her delivering an address to the nation. Yikes.

The IQ of the whole country would plummet.

Source
VP Kamala Harris Does Interview In Front Of Sign In Louisiana…There Just One Problem is written by michael for trendingpolitics.com