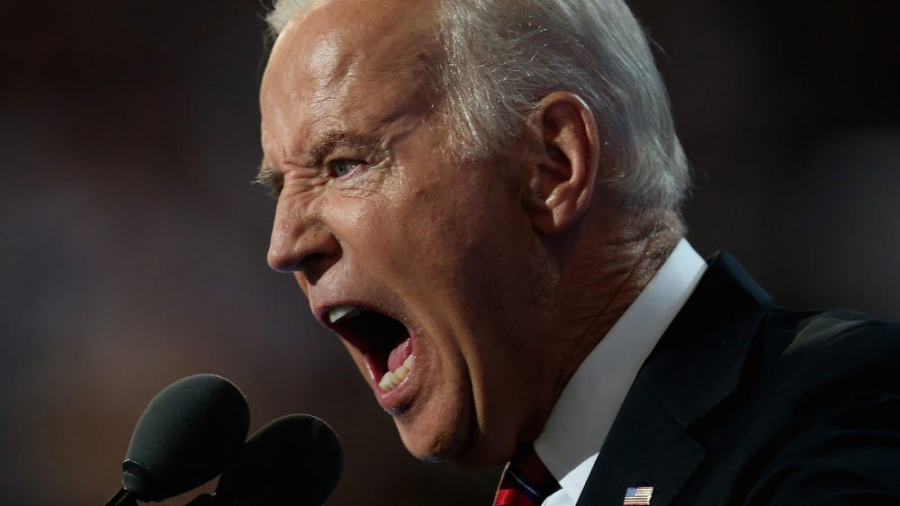 Joe Biden has been shamelessly shooting off his mouth at reporters during his four decades in public service.

Those in the Democratic party were hoping that the 78-year-old declining Joe would have been able to keep his mind and cool when speaking with the media and citizens, and just be a grandpa to the nation if elected the 46th President Of The United States.

Instead, Joe has been using a strange whisper, snapping at and as in today, mumbling to himself not realizing the reporters can hear him via a hot mic.

This afternoon, the unaware Joe Biden was caught on a hot mic calling Fox News White House Correspondent Peter Doocy a “stupid son-of-a-b****!” at the conclusion of his press conference.

As the room filled with White House correspondents cleared, Fox News’ Peter Doocy attempted to ask President Trump a final question about inflation from the back of the room. It’s difficult to hear precisely what Doocy is saying, as he’s forced to wear a face mask, but it’s

The camera moved to Joe Biden, who perhaps thought a fairy would turn off his mic, as he mumbled a response to Doocy’s question. “That’s a great asset. More inflation!” Biden mumbled. ” What a stupid son-of-a bitch!” Biden said as he shook his head and looked around the room.

HOT MIC: Biden calls Peter Doocy a “Stupid Son of a B*tch” for asking a question about inflation. pic.twitter.com/q5LQIb1KpL

Peter Doocy appeared on Fox News’ “The Five,” almost immediately after Biden’s unpresidential remarks where he was asked about the incident by the hosts.

Today’s blunder is just one of many Joe has committed in the just past 2 years alone.

Rember any of the following beauties?

Biden said this during a campaign stop in Iowa in December. In a video depicting the event, a man confronts Biden about his son’s connection to Burisma, a Ukrainian energy company.

Later in the exchange, Biden challenges the man to do push-ups and says “look, fat, look, here’s the deal” while addressing him. He also refers to the man as “Jack” and challenges him to an IQ test.

Biden said it during a February campaign event in New Hampshire. In a video of the event, he responds to a woman’s question about his fourth-place finish in the Iowa caucuses.

“How do you explain the performance in Iowa, and why should the voters believe that you can win the national election?” she asks.

“That’s a good question,” Biden responds. “No. 1: Iowa’s a Democratic caucus. You ever been to a caucus?

The woman said yes. But Biden didn’t believe her.

“No, you haven’t. You’re a lying dog-faced pony soldier,” he said.

It sounds like an attack, but the audience laughed after Biden made the joke. His campaign said the line — which Biden has used before — comes from a John Wayne movie, but it’s not clear that it does. (Email us if you know the source of the line.)

Biden made the statement before the March 10 Michigan primary while touring a Fiat Chrysler plant in Detroit. A video of the incident shows a man confronting Biden about his stance on gun rights.

WATCH: “You’re full of sh*t,” @JoeBiden tells a man who accused him of “actively trying to end our Second Amendment right.”

“You are actively trying to diminish our Second Amendment right and take away our guns,” the man says.

“You’re full of s—,” Biden responds, cutting off a person from the campaign who was trying to stop him, saying “shush.” “I support the Second Amendment.” Biden then said he was fine with people owning firearms, but not assault weapons or weapons that shoot “100 rounds.”

All I can say is Joe Biden is the U.S. President, I just don’t claim him as mine.

We the people still have three very long years remaining with sleepy Joe unless, of course, he steps down for the good of the nation, or is replaced when the total onset of whatever is overtaking him is complete.

The question is how much damage will he do in the meantime and will his terrible performance lead to the GOP taking back the Congress in 22 and Presidency in 2024?

I optimistically say, yes and yes, but still believe the deconstruction of the federal government is the only hope, short of God’s intervention, of our nation returning to a “United” States Of America.