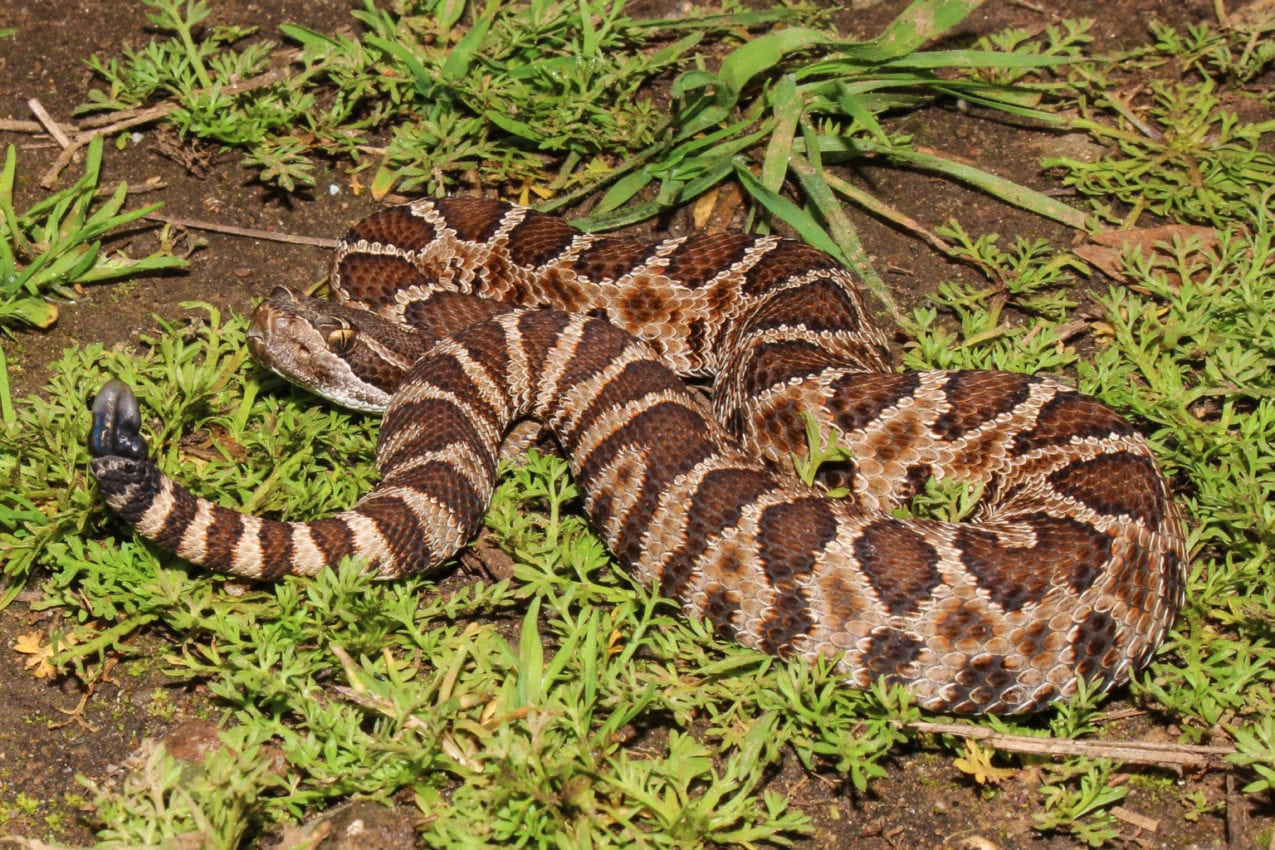 Knowing the venomous rattlesnakes of North America beforehand will leave you in a better position to deal with any if you ever run into it. Better still, the knowledge will help you avoid them if you know you can’t deal with these crawlers when you meet them. This is a very crucial lesson to survival.

I would suggest that you spend more time surviving in snake-dense areas and how to survive an attack. This discussion will be handled in future posts, but now let’s look into the common venomous rattlesnakes of North America you’re likely to come across or occasionally find in your kitchen.

Mind you, at all times, these snakes are dangerous. Do not trifle with any on the list below; their tongues are forked.

The Eastern Diamond Rattlesnake is ironically named, given that it roams the Southeastern regions of America in lower coastal lands. They are also a common presence across the Florida Keys to Southeast North Carolina, East Louisiana, and South Mississippi’s west.

This snake grows to an intimidating length of 96 inches, making it the largest rattlesnake on this list. And maybe you want to know; the Eastern Diamondback is the most dangerous in the whole of North America.

The Timber Rattlesnake is mostly found in America’s eastern regions, save for the extreme northern areas. Needless to say, Timber is extremely dangerous. Often growing as long as 75 inches, it is also a large snake.

And now, talk about venom; talk of the ultimate killer.

If sizes are anything to go by among rattlesnakes, one would be easily misled of the Mojave’s venom since it grows to just 51” – long enough but shorter to the breeds we’ve looked at above. Ladies and gentlemen, I, hereby, introduce you to the most venomous rattlesnake across the whole wide world. Yes, North America contains some venom.

There’s a sure presence of this commonly 84” long rattlesnake across the southwestern plains of America, stretching across southeast California to Central Arkansas. Yes, 84 is a huge size for a snake. The Western Diamondback prefers parched & semi-parched areas, such as Rocky foothills, brush deserts, river bluffs, and rocky canyons.

Having a run-in with the gentleman with speckles and freckles along the deserts of America’s southwestern regions is quite definite. Hence, as you travel these plains, keep your eyes open for a crawler of about 52 inches.

The speckled rattlesnake alternates its movement patterns at summer and spring, preferring to hunt at night in the former and at day in the latter. This snake is available for a kiss in chaparral boulders & rock piles, talus, tough rocky terrains, deep canyons, and rock outcrops, although I’d suggest that you don’t stop for a hi, much more a lip lock when you two meet.

The Pygmy rattlesnake grows just between 15 – 31 inches, which may be a good or bad thing, depending on how you see it. Its shorter length could be helpful if you’re easily intimidated by the size, but this could also mean that it is less noticeable than its counterparts. Pygmy explores across vast lands, past East Texas, North Carolina into Florida Keys, and sweeping across Oklahoma. Be extra wary of the Pygmy when you’re close to ponds, in marshes, sandhills, and combined pine-hardwood forest.

As a distinction, the massasauga has nine extra-large scales on its head, spreading from its eyes. This feature makes it easily identifiable but not less dangerous. You can find the massasauga for a drone picture when you canvass Texas, the whole of Iowa & northwest Pennsylvania. Pay extra attention when you go into bogs, swamps, dry woodlands, and rocky hillsides.

The sidewinder is a peculiar rattlesnake in its movements, as it journeys shifting surfaces through a process known as “sidewinding.” This feature involves the snake using static friction to stay on track and avoid slipping when moving over soft, sandy surfaces, thus leaving behind a trail of parallel J shapes. As a result, the sidewinder prefers to travel mesquite sand hammocks and parched desert with sandy washes.

The sidewinder rattlesnake grows to a maximum of 33 inches and is chiefly nocturnal, meaning that you’re most likely to come across the fierce-looking crawler from sundown to midnight when you cross roads & trails. During the day, meanwhile, it is hiding beneath bushes or staying gin mammal burrows.

This rattlesnake is a constant presence in southwestern America’s deserts, which may explain why it is colored like the desert.

Typically growing between 20 – 36 inches in length, the tiger rattlesnake is a highly venomous kind of pit viper snake. The combination of tiger and snake in its name is enough to stir fright, isn’t it? You are most likely to find this viper in Central Arizona & Southern Sonora, Mexico.

The tiger rattlesnake is mostly found in saguaro-palo verde mixtures; bushes made up of ocotillo, mesquite & creosote, canyons, and within rocky foothills.

Saving the best for the last, the black-tail is the least venomous rattlesnake in North America. The crawler is common in central/east Texas, Arizona, and travels south to Central Mexico. A black-tailed rattlesnake is most found in rocky areas, typically among limestone & rimrock outcrops, rocky streambeds, chaparral, and wooded stony canyons/hills.

The venomous rattlesnakes of North America are not to be toyed with under any circumstances. Even the black-tailed rattlesnake (the least venomous) is harmful to humans and livestock. Be extremely careful of these crawlers when you go camping in North America; there are high chances of one slipping into your backpack when you’re unsuspecting.

TEN Dollars A Gallon Around The Corner And Liberals Are Excited...

How To Prepare For Away-From-Home Emergencies

How To Find The Best Bug Out Bag