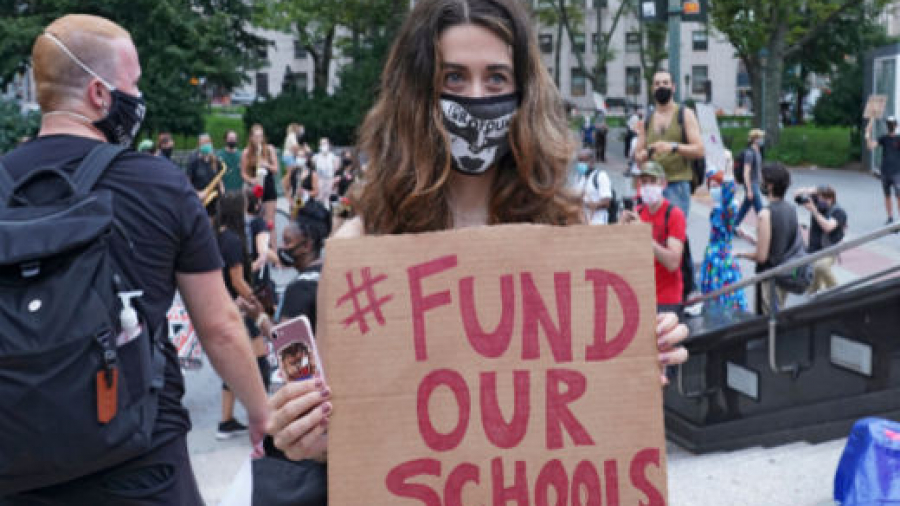 Union leaders are once again whining and moaning about teacher shortages just ahead of a brand new school year, thus making the call for someone to hand them free money. Typical progressive behavior, right?

A report from The Daily Wire stated that National Education Association President Rebecca Pringle, who conducted an interview with ABC News, went on to estimate that the U.S. is short about 300,000 teachers and additional support staff, which she said is the fruition of a “crisis in the number of students who are going into the teaching profession and the number of teachers who are leaving it.”

She then said that 55 percent of teachers have considered leaving the field sooner than previously expected.

Here’s a bit more from the Daily Wire report:

The shortage comes as COVID and the lockdown-induced recession prompted millions of Americans to retire or otherwise exempt themselves from the job market. The labor force participation rate has dropped from 66% in 2008 to 62% in 2022, falling 3% between February 2020 and April 2020 alone, according to data from the Bureau of Labor Statistics.

In response to the shortage, Pringle recommended that citizens ask that “all of our schools are funded, so all of our students have what they need and they deserve.” American Federation of Teachers President Randi Weingarten, meanwhile, pointed to “inadequate support and resources” and “subpar compensation” in a July press release discussing the teacher shortage.

Despite claims of poor funding, there is by no means a lack of taxpayer dollars flowing toward government schools. A report from the National Center for Education Statistics indicated that the inflation-adjusted yearly expenditure per American pupil rose from $4,060 to $15,424 between 1960 and 2017 — a 280% increase. Another study from the Department of Education revealed that schools increased the number of non-teaching staff by 702% between 1950 to 2009 and hired 252% more teachers over the same period.

One example is the state of Virginia, which “would have had an extra $29,007 to spend per teacher if it had limited the growth of administrators and other non-teaching staff” from the years 1992 to 2009, according to the information gleaned from the study.

Robert Bortins, the CEO of Classical Conversations, a company that produces the curriculum for Christian homeschool families, took an opportunity to break things down for the Daily Wire, stating the bloated funding happens as the U.S. continues to be in a mediocre position on many international education metrics.

There used to be a time when the United States was near the top of those metrics mentioned a bit ago. We used to be the place where folks wanted to send their children to receive a high-quality education and have access to bigger and better opportunities than they themselves had when they were young in their home countries.

Now we’re sending our kids overseas to get educated, or better yet, taking on the responsibility ourselves and homeschooling them so they have an actual shot at succeeding in their lives.

“If the New York Yankees, who routinely have the highest payroll in the MLB, missed the playoffs almost 100% of the time, the front office would be fired, not given more money,” Bortins pointed out. “Giving our current government education system — a group of individuals who can’t even properly identify man versus woman — more money is not the solution to providing our children a better education.”

Yes, it is most likely that unions are also playing a significant role in the shortage of teachers available, according to Bortins.

“Teacher unions have helped create this broken system through decades of legislative reform that are designed to give themselves power, rather than empowering families to give their children a great education,” he proclaimed. “Teacher unions support legislation that puts unneeded and unnecessary licensing burdens on new teachers, keeping qualified individuals out of the profession due to being improperly credentialed.”

The founder of the Classic Learning Test, which is a standardized exam that was created to help kids with Christian and classical education, Jeremy Tate, also spoke with the Daily Wire and slapped down unions saying that the main motivating force behind them is not helping the students, but providing protection for teachers.

“Nothing discourages young people from entering the teaching profession more than teachers unions and the policies they push. Teaching is inherently a heroic calling, but the unions put an ugly stain on the beauty and dignity of this great profession,” he went on to say. “Pouring your life into the next generation is a high and beautiful calling for young people and they get excited about it. But having to join the ranks of an organization that clearly doesn’t want the best for students kills this excitement.”

This is just one more reason why we need to rip apart the public education system and get things back to the local and state level. What I mean is, get rid of any governmental say in education altogether. Turn it over to the public sector. Force schools to compete against each other. This will increase the quality of the material and instruction students receive, while also driving down prices to affordable rates.

Or, you can just homeschool, which is a highly recommended option for immediate results. The public schools are only brainwashing students anyway. Pull them out and teach them yourself. Doing so today is easier than ever.

Source
Unions Whine About Shortage Of Teachers Ahead Of School Year; Here’s What They’re Pushing For is written by michael for trendingpolitics.com