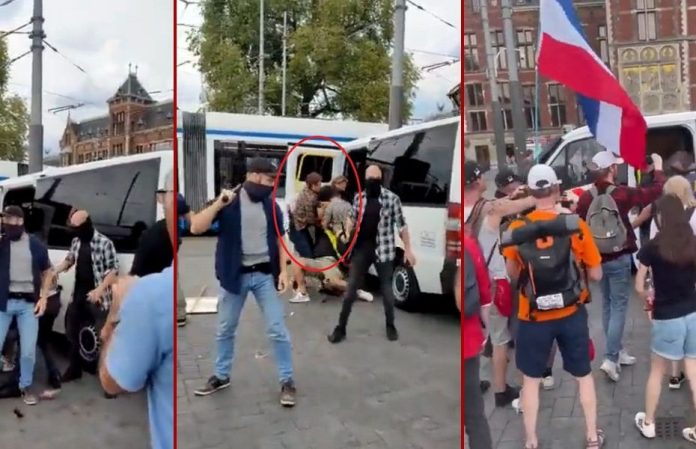 In Amsterdam, public footage has surfaced that appears to show undercover police officers violently arresting a civilian. The undercover operation reveals a disturbing escalation in state action against the the Dutch farmer protesters.

That happened in Amsterdam, undercover Police were trying to arrests the farmers from a protests rally. pic.twitter.com/hWtbliaU8r

Additional footage corroborates that uniform police intervened to assist with the undercover operation.

Dam Square in Amsterdam, Here’s the sequel to the earlier video. Protesters are furious with police after the arrest of a protester.#DamSquare #Amsterdam #Protest #news pic.twitter.com/vnFOBNowWC

In the Netherlands, there are reports of “undercover police agitators” who infiltrate protests against the government known as “Romeo’s.” They can often be identified wearing masks more commonly seen under the Covid pandemic response.

Undercover police agitators known locally as “Romeo’s” chased out of the people’s protest against permanent Covid laws and in support of farmers in Amsterdam.👀👀 pic.twitter.com/DaK0hXjLIF

In early August, Dutch police actions against pro-farmer protesters reached their most openly violent to date.

⚡️ In the Netherlands, the police violently dispersed the protesting farmers

The Dutch authorities intend to oblige farmers to significantly reduce nitrogen emissions. This threatens many agricultural producers with ruin, so they have been protesting for several weeks. pic.twitter.com/IGdS4IsovC

The Dutch police have been steadily ratcheting up their operations to disrupt and thwart the pro-farmer protests.

A source in the Netherlands told me that Dutch police stopped 100+ tractors and truckers on their way to Amsterdam for the protest.

The tractors that arrived this morning are the only ones that made it. https://t.co/387GxIXA0D

“A source in the Netherlands told me that Dutch police stopped 100+ tractors and truckers on their way to Amsterdam for the protest,” RebelNews’ Katie Daviscourt reported on July 23. “The tractors that arrived this morning are the only ones that made it.”

In early July, the Dutch police actually fired shots at the farmers’ tractors, then claimed they were ‘warning shots.’

“Dutch police fired shots at tractor-riding farmers who were protesting against plans to cut nitrogen emissions on Tuesday evening in northern Netherlands,” Politico reported on July 6.

“According to the Friesland police, their shots hit a tractor, but no one was injured,” the report added. “Three suspects were arrested.”

Amid the reports of the police incident, a video reported claiming that the Dutch farmer protesters attacked undercover police officers went viral. The original video was debunked as actually having originated at a Covid lockdown protest in August 2020.

In late June, pro-farmer protesters attacked police vans with mallets and blunt instruments amid the ongoing enforcement of the climate policies.

Dutch farmers very angry after politicians’ decision to closes dozens of farms and cattle ranches to reduce nitrogen by 30%. pic.twitter.com/zHzMO1gNfu

The Guardian reported in December that the nitrogen crackdown stems in part from the highest Dutch administrative court deciding in 2019 that “the government was breaking EU law by not doing enough to reduce excess nitrogen in vulnerable natural areas, due to farming and industrial activities.”

The Netherlands’ 13-year multibillion-euro plan initially pays Dutch livestock farmers to “relocate,” “exit the industry,” or “transition” to government-approved farming practices. While this initial stage is deemed “voluntary,” the government reserves coercion as a final resort.

“In the end, it might be necessary to stop negotiating as a last resort, but the basis is voluntary,” said Dutch MP Tjeerd de Groot, part of coalition government’s Democrats 66 party.

The ultimatum would spark ‘freedom convoy’ protests in spring and summer of 2022, which have continued despite a dearth of international coverage. 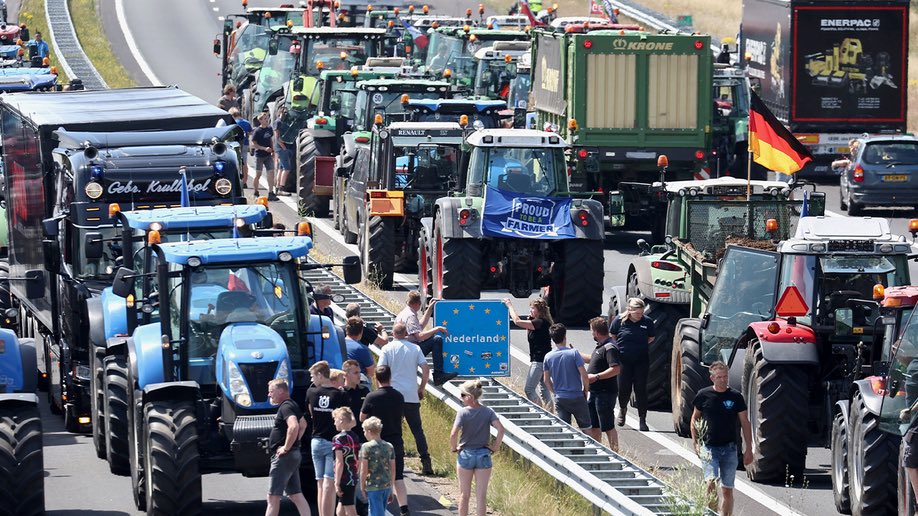 “The demonstrations are so widespread that Rolling Stones’ Mick Jagger gave a shout-out to the farmers in Dutch during an Amsterdam concert,” she added while citing Fox News. 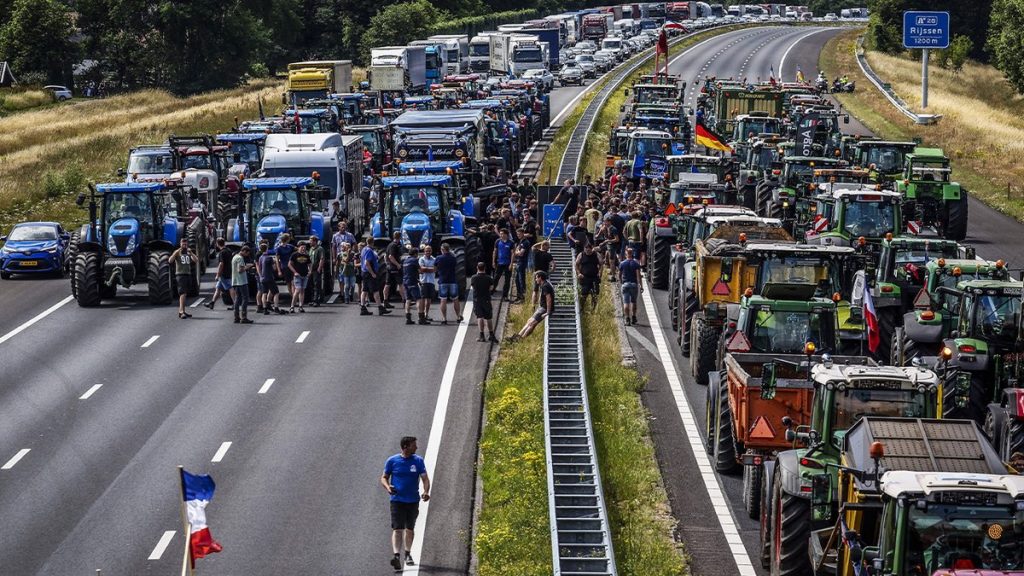 Dutch prime minister Mark Rutte has slammed the protesters, including calling them “a–holes” in private company, the report added.

The farmers themselves have often been cordial and hospitable, even to police officers. The ‘freedom convoy’ protests are a form of non-violent resistance to oppose what the farmers view as injustice. 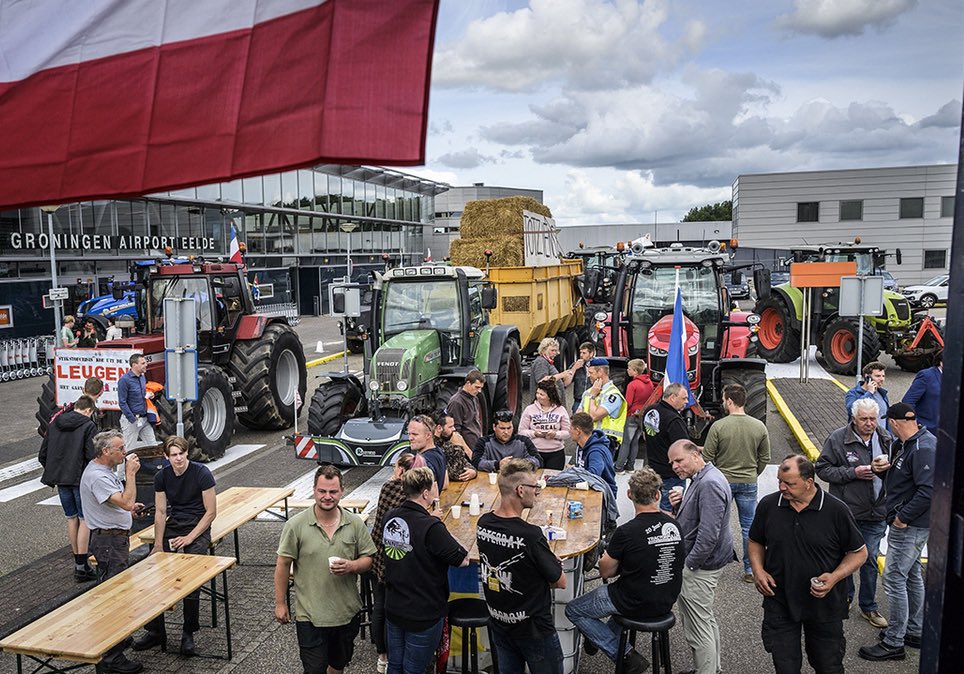 But those non-violent protests have not come without friction with authorities who see dealing with the farmers and their public backers as a thorny issue for the government.

In addition to reports of the Dutch police’s aggressive response against the farmers and their backers protesting the climate regulations, there have been videos of police attacking journalists at the protests.

Mark Rutte’s police incredibly attack a woman in Amsterdam and push her to the ground, then grab her by the neck and hair. The woman is a reporter for the LNN media, is a former police officer and is fiercely opposed to politics and senseless police brutality. pic.twitter.com/GYLBAQuXnn

The Dutch police actions are raising public alarm that the nation is becoming increasingly dictatorial under stringent environmental regulations. At a July 23 rally, former U.S. President Donald Trump praised the farmers for fighting against “climate tyranny.”

Sieta van Keimpema, the Farmers Defense Force (FDF) secretary, was questioned in July on the FDF’s tactics, which include setting fire to hay bales, blockading thoroughfares with tractors and heavy machinery, blocking on-ramps with mounds of soil, and smeared manure outside the home of the agriculture minister.

“As long as the government sticks to the current goals, you will get this kind of situation,” she said. “30,000 companies are affected by this. People can’t sleep anymore. There are suicides among farmers who can’t anymore.”

The Ministry of Finance estimates that nearly 30,000 farmers could be impacted by the climate plans. As many as 11,200 companies would be forced to close and 17,600 farmers would have to reduce their livestock to comply with the government’s plans.

Trienke Elshof, a dairy farmer with 250 cows in the northern province of Friesland, told Time that the regulatory push is too much, too fast for the farmers to accommodate.

“We know we have to do something about nitrogen, but not in this top-down way, and not at this speed,” she says. “It feels like they want to get rid of all the farmers in the Netherlands.”

The Netherland’s other high-polluting industries, such as aviation, construction, and transport, are not yet being targeted by stringent environmental rules. So, why target food production? And why now? When the world is facing food shortages, in part due to Covid lockdowns?

Russia tells U.S. ‘fly on broomsticks’ because you won’t get more...