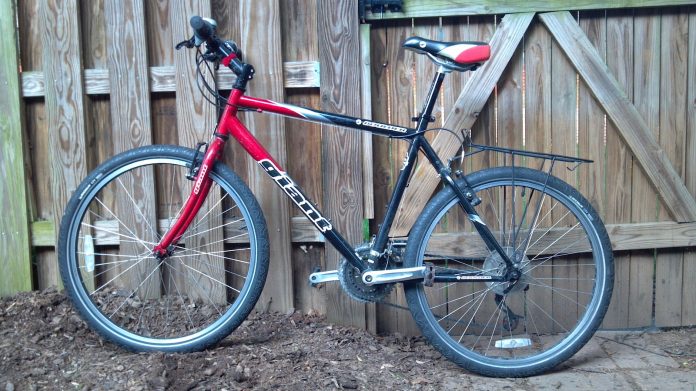 Many preppers want to know what the best bug out vehicle is for gettin’ outta dodge.  And most people will tell you it’s some sort of huge, rigged out off-road automobile.

However, these automobiles pose a lot of problems. For one, you need gasoline to run them, so if the grid is down or you don’t have access to a gas station, you could be in big trouble. (However, you could always learn how to siphon gas in a crisis by reading our blog here…).

Another big issue is that cars break down quite easily. They contain a slew of parts that can break, short or malfunction. And when SHTF, there’ll be very limited access to parts/mechanics, rendering your vehicle potentially worthless.

Now I’m not saying that all bug out automobiles are bad, or that they’re not worth their salt for transportation and living space. However, I’ve got an idea that I think is way better…

Why Bicycles Make The Best Bug Out Vehicles

When cost is an issue, there’s really no comparison. Many times, getting an off-road automobile that’s bug out-ready can cost thousands of dollars.

However, getting a good mountain bike with a variety of speeds will typically only cost you a couple hundred. Better yet, people are consistently selling their used (or even new) mountain bikes on Craigslist or at Goodwill, making them even cheaper.

Better yet, you can modify a used bike to your liking. By adding new parts and survival-specific attachments, you can turn an old mountain bike into the ultimate bug out vehicle.

One of the biggest hindrances that most preppers face is all the stuff they have to carry.

As a result, many preppers who are traveling in cars/SUVs bring a ton of stuff with them, since they figure they have the storage space in their vehicle to transport it.

That’s all well and good…until your car breaks down and you can’t get it fixed. Then you either have to take all that extra stuff with you, or leave it in the car for pillagers to find.

Truth is, you need much less preps than most preppers think to survive day to day. In fact, you can even create your own bicycle EDC survival kit, and strap it to your bike for easy, effortless carrying.

Plus, if you have a bug out pack, you can easily carry it on your back while riding on the street, through the forest, or over the countryside.

Now keep in mind there’s not necessarily a “best survival kit” out there. Each survival kit is unique to the prepper using it. However, the video below will give you some ideas for what to carry on your new all-terrain bug out vehicle:

3 – It Doesn’t Require Electricity Or Fuel

The wonderful thing about this type of bug out vehicle is it doesn’t require gasoline, electricity, or fuel to run. That means while all the other preppers are at the pump (or stranded ‘cuz they ran out of gas), you can peddle along on your merry way.

However, there is one thing I want to point out. Although bikes don’t originally require anything but your physical energy to move, you can still make modifications to make it easier.

For example, some preppers go so far as to add an engine to their bike. This helps them conserve energy when they’ve been riding a long time or when going uphill. And trust me – when SHTF and you’re out all day trying to survive, you’ll need every ounce of that energy you’ve stored up.

Take a look at this guy, and how he modified his bike to stay prepared:

4 – You Can Always Attach A Trailer

Now if you’re anything like my wife, you want to bring every last item from the house with you when SHTF. And this is one criticism of a bicycle – it just doesn’t have nearly as much loading space as a car.

Plus, an automobile is nice since  it provides you a protected, sheltered area to rest/sleep in.

However, there are ways to get around that.

Take the guy in this next video – he’s made himself a camper that attaches to his bicycle. This thing has everything he needs to survive a post-apocalyptic scenario.

And what’s crazy is it’s so lightweight, he has no trouble at all dragging it around behind him. Take a look:

Now keep in mind one of the biggest caveats to having a bug out bicycle is you need to be in good enough shape to ride it – especially for long distances.

That’s why I highly recommend you get one and start riding it now. Start with short distances, and work your way up.

It’s also important to ride up and down hills, since the terrain in a bug out situation isn’t likely to be completely flat (like your suburban neighborhood).

Remember – you can have what it takes to live through a crisis if you start today. By prepping your bike (and your body) for an emergency, you’re more likely to stay alive – and even thrive – when SHTF.

Supreme Court: Illegal Immigrants Can Be Detained Without Bond