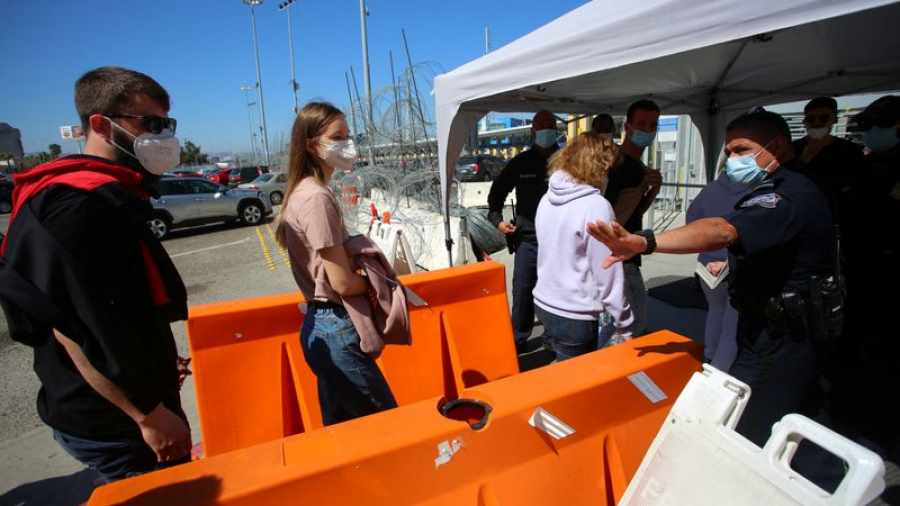 At the U.S. border with Mexico, American officials are allowing Ukrainians fleeing the Russian invasion of their homeland to enter the United States and stay without fear of deportation for a year, according to people crossing.

Several Ukrainians told reporters they passed through a checkpoint in the northern Mexican city of Tijuana this week and were granted permission to remain in the country until 2023.

CBP and the U.S. Department of Homeland Security (DHS), which oversees the border agency, did not reply to requests for comment. DHS has said in the past that all parole decisions at the border are made on a case-by-case basis.

The Ukrainians reported traveling through a string of countries to get to the United States, where they hope to find refuge, stay with relatives or rebuild their lives.

Alex Mak, a 24-year-old Ukrainian who declined to give his full name for fear of reprisals, said officials put a stamp in his passport authorizing him a year’s stay.

“It’s a crazy situation. Your life just stops,” he told Reuters as he waited in the sun for over an hour in Tijuana to cross the border on Tuesday. “You can’t plan for work because of the war, and you don’t have work, you can’t work.”

Alex described how he had been due to return to Kyiv on Feb. 25 from a trip to Uganda, but was advised not to by friends when Russia invaded a day earlier. Russia has characterized its attacks on Ukrainian cities a “special military operation.”

More than 3 million Ukrainians have fled the fighting, according to the United Nations, with the majority finding refuge in neighboring countries. At least 310 have reached Tijuana by air this month, said Jesus Ruiz Uribe, the Mexican government’s delegate for Baja California state.

The U.S.-Mexico border has been closed to most asylum seekers under a pandemic-era policy known as Title 42, but Ukrainians described moving to the front of a line of migrants waiting to make their claims to border officials.

“I want temporary protection,” Alex said, “until the war stops. I know I don’t want to be a refugee.”

A group of Democratic lawmakers urged U.S. President Joe Biden this month to increase refugee admissions, and allow Ukrainians with family members in the United States to enter faster with humanitarian parole.

Vira Krasiuk, who fled the besieged southern city of Mykolaiv with her family, said some Russians at the Tijuana border crossing told her that Ukrainians would be given priority to go into the United States if they showed their passports.

Krasiuk said Russian military attacks on the first day of the conflict were so close to her home the family could hear them. Gathering up some belongings, she, her husband and daughter scrambled first to Moldova, then Romania before reaching Mexico by plane.

“My parents are left behind,” she said.

After questioning by U.S. immigration officials, the family was let into the United States. A DHS stamp in her passport said “PAROLED” with a handwritten date stipulating she could remain in the United States for a year.

Krasiuk recalled how an official took her family through to the San Ysidro, Californian side of the border, returned their passports and wished them well, saying: “All the best.”

Mexico has also registered an increase in Russian migrants fleeing their homeland amid growing tensions. Aside from Russians, Reuters witnesses saw Mexicans and Colombians at the border seeking asylum who were turned away.

Maryna Sokolovska, a U.S. citizen who left Ukraine with her cousin and the latter’s child, got her family into the United States after an odyssey that led them through Poland, Croatia, Hungary, Amsterdam and Mexico City and then Tijuana.

“It felt like a miracle that after four hours, we, including a baby, were let in,” said Sokolovska, 35, who is acting as a sponsor for her relatives in the United States.

The mother and child were given leave to stay for a year under humanitarian parole, said Sokolovska, a trained dentist who runs a video production company from Beverly Hills.

Sokolovska said she traveled to Lviv in western Ukraine to fetch her relatives when her cousin’s husband went to fight and the area she lived in outside Kyiv came under attack from Russian forces.

“It was crazy, she was so afraid,” Sokolovska said of her cousin. “She was saying they had run out of food.”

Source
U.S. lets Ukrainians fleeing war migrate into the United States from Mexico is written by Wolf Daily for wolfdaily.com