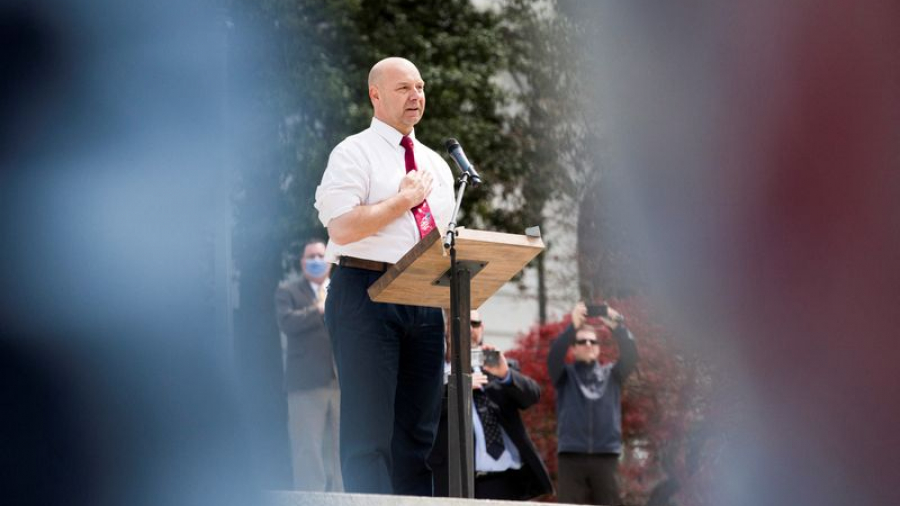 Republican candidates endorsed by Donald Trump won their party’s nominations for governor in Pennsylvania and for the U.S. Senate in North Carolina on Tuesday in the biggest test yet of the former president’s influence in his party ahead of November’s midterm elections.

But Madison Cawthorn, a Trump-backed Republican congressman in North Carolina, lost his bid for a second term after a dizzying string of self-inflicted scandals, while Trump’s pick for Idaho governor, Lieutenant Governor Janice McGeachin, failed in her bid to oust the incumbent Republican, Brad Little.

The biggest election night of the year so far delivered mixed results for Trump movement, although votes were still being counted in the high-profile Republican Senate primary in Pennsylvania in which Trump-backed TV personality Dr Mehmet Oz was locked in a tight race with former hedge fund executive David McCormick.

Trump’s lasting influence over his party has been a central theme of this election as Republicans battle to oust Democrats from control of the U.S. Congress.

Pennsylvania state Senator Doug Mastriano, who has amplified Trump’s claims of 2020 voter fraud and marched on the U.S. Capitol on Jan. 6, 2021, will face Democratic Attorney General Josh Shapiro in a governor’s race.

Some Republican Party insiders feared that Mastriano’s primary victory would prove Pyrrhic if he turned off moderate voters in the Nov. 8 general election.

Trump has endorsed more than 150 candidates as he tries to solidify his status as his party’s kingmaker, though his picks have not always prevailed.

In Pennsylvania’s marquee U.S. Senate race, Lieutenant Governor John Fetterman – a goateed, tattooed liberal whose fondness for hoodies and shorts has given him everyman appeal – won the Democratic nomination despite having been hospitalized since Friday after suffering a stroke.

Fetterman, a progressive, defeated moderate U.S. Representative Conor Lamb just hours after having had a pacemaker implanted to address the irregular heart rhythms that caused the stroke. He has said doctors expect a full recovery.

In a statement, Biden praised Fetterman while warning that whoever prevails in the Republican contest “will be too dangerous, too craven, and too extreme” for the state.

Fetterman’s Republican opponent remains to be decided. With more than 90% of the expected vote reported, Oz was ahead of McCormick by about 2,700 ballots out of nearly 1.3 million counted, according to Edison Research. Conservative political commentator Kathy Barnette was far behind in third.

Under Pennsylvania law, any margin of 0.5% or less triggers an automatic recount.

Both Oz and McCormick told supporters late on Tuesday that they expected to win but that a final result was not expected that night, given the number of outstanding mail ballots to be counted.

Republicans are well positioned to regain control of the House, which could enable them to stonewall Biden’s legislative agenda. Biden’s public approval rating is at 42%, with 50% of Americans disapproving of his performance, according to a Reuters/Ipsos opinion poll completed on Tuesday.

Democrats have a better chance of keeping control of the Senate, currently split 50-50 between the parties with Vice President Kamala Harris holding the tie-breaking vote.

In Pennsylvania, Trump made an 11th-hour endorsement of Mastriano, who was outside the Capitol on Jan. 6, 2021, when a mob of Trump supporters attacked the building. He played a significant role in the Trump campaign’s failed effort to overturn Pennsylvania’s 2020 presidential results based on false claims of voter fraud.

If Mastriano wins in November, he would be able to appoint his own secretary of state, the state’s top election official, ahead of the 2024 presidential election, when Trump suggests he may seek a second term in the White House.

Mastriano has also said he would pursue a statewide abortion ban after a leaked draft opinion showed the Supreme Court is poised to overturn its landmark 1973 decision legalizing abortion nationwide.