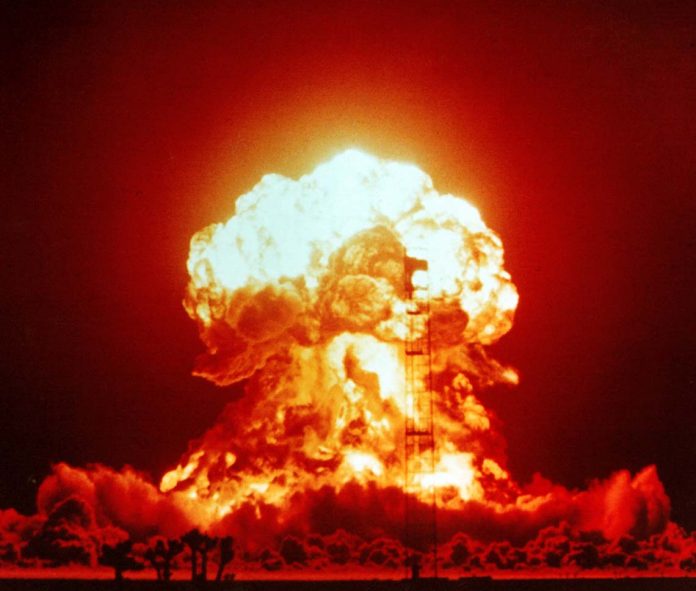 Ever since the Cold War, America has been preparing itself in one way or another for surviving a nuclear explosion.

Back in 1945, America created the first nuclear weapons. And ever since then, we (as well as the rest of the developed countries) have become extremely knowledgable about how to build these weapons, as well as the horrific effects that can take place once one is launched.

As a response, America taught its school-age children to duck and cover under their desks to try to protect themselves from a potential blast.

Americans were also encouraged to build or buy fallout shelters to help protect themselves from an attack. However, less than 4% of the population went this route.

Ever since the Cold War ended, Americans have slowly put nuclear war preps on the backburner, and the threat has become less dramatic. However, thanks to war hawks in D.C. looking to reinvigorate hostilities against Russia, that all could change. We could need to experience nuclear attack prep all over again.

However, nowadays, this prep work looks a bit different from the “duck and cover” method used generations previously.

Considering that we are constantly on rocky terms with the East, I think it’s only smart that we pay attention to these…

Something I didn’t mention – nuclear war isn’t the only think we need to worry about. You also need to think about radiation accidents, such as a nuclear plant exploding.

That’s why it’s crucial, no matter where the explosion comes from, to learn all you can about radiation, its effects, possible treatment options, local nuclear plants near you, how far the radiation spreads, how you can get contaminated, and other necessary knowledge.

Now, to be frank, if your city gets bombed by a nuclear weapon it’s very likely you won’t survive the explosion. However, there’s a great likelihood you could be far enough away from the explosion to not be obliterated, but close enough to still experience the subsequent radiation.

And, if you learn NOW what radiation does, how it effects you, and how you can either treat it or get away from it (the preferable option), this knowledge could easily save your life.

It’s best to continuously store your electronics in a faraday cage. This way, in the event of electromagnetic radiation, you can rest assured your devices will still work perfectly.

You can choose to either purchase these cages, or build them yourself (depending on how much time you think you have left).

In the event of a nuclear explosion, you’ll need to find shelter in a basement or storm cellar (particularly one that’s as deep as possible) FAST in order to try to escape the radiation.

Before the explosion occurs, you’ll also need to seal up the cracks beneath your doors, windows, and ventilation so the radiation won’t seep through. One way to do this is with plastic sheets and duct tape.

It’s also important to invest in an air filter inside the home to help keep the air inside clean.

Like any good prepper, you’ll need to have stocked up on at least a month’s supply of food and water in order to prepare for a nuclear explosion.

Make sure to continuously organize your supply, moving the closest expiration dates to the front, and your longer-term produce toward the back.

It’s also imperative to only drink emergency water out of bottles – either bottled water you bought from a store, or water you purified and bottled at home well before the explosion. This will help ensure no radiation gets into your body.

Your chances at surviving a nuclear explosion will go up dramatically if you equip yourself with the necessary preps. Things like a radiation suit, goggles, and gas masks will go a long way to help keep your body prepared.

Also consider investing in potassium iodide tablets. Consuming these will help protect your thyroid gland from injuries caused by radiation.

Radiacwash towelettes are also excellent at helping remove radio contamination from your skin and small objects.

Once you’re safely inside after a nuclear explosion, quickly remove your clothing by cutting or ripping it off of you. This is a better option than taking them off normally, as it helps prevent further spreading of the radiation onto your skin, eyes, and hair.

Throw these clothes (as well as any jewelry, watches, or other accessories) into a sealable bag and dispose of them immediately.

Now it’s time to wash – combine 1 part bleach with 10 parts water and soak in the water. Make sure to wash your hair in the water as well.

When it’s time to get into clothes, see if there’s a radiation suit you can throw on.

Pro Tip: If you prepared by stocking up like I told you to in #5, this should be no problem.

This is one of the most important things to know in the event of a nuclear explosion. Whether you are in the middle of one, or just outside one, it’s crucial that you get out as FAST AS YOU CAN.

Once the explosion hits and the mushroom cloud goes up, you’ve got about 15-20 minutes to get at least a mile away before the radiation falls down upon you. Shoot for places with high elevation, particularly in a forest.

So the point is, whether you have to walk, crawl, hitch a ride, or use your bug out vehicle, you must get out as soon as you can to save yourself.

Like I said…we’ve been fearing a nuclear explosion for the past few decades. And, considering the rocky relationships we have with the East, I think it’s only a matter of time until we’re dealing with this type of crisis.

Watch the video below for some fascinating information on surviving a nuclear attack. This knowledge could truly save your life! Remember – Prepare Now, Survive Later!

Why These 2 Powerful Herbs Are A Godsend In A Crisis

How To Clean Your Gun After Shooting Corrosive Ammo