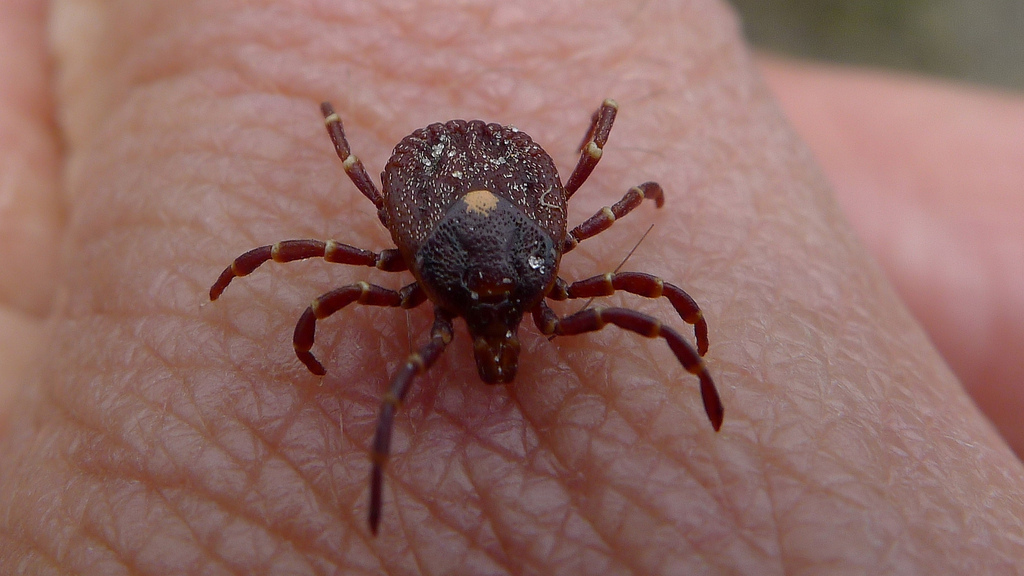 We’re in the beginning of March, which means it is officially tick season. From March until mid-May (and then again from mid-August to November) ticks come out and are the most active.

And this is a problem for most of us, since ticks have a strong tendency of jumping/flying/falling onto your body, burrowing their heads into your skin, and feasting on your blood.

As a result, these very tiny vampire-like arachnids are a very real threat to your survival. That’s because they often carry Lyme disease. According to the Centers for Disease Control and Prevention (CDC) website:

Lyme disease is caused by the bacterium Borrelia burgdorferi and is transmitted to humans through the bite of infected blacklegged ticks. Typical symptoms include fever, headache, fatigue, and a characteristic skin rash called erythema migrans. If left untreated, infection can spread to joints, the heart, and the nervous system. Lyme disease is diagnosed based on symptoms, physical findings (e.g., rash), and the possibility of exposure to infected ticks.  Laboratory testing is helpful if used correctly and performed with validated methods. Most cases of Lyme disease can be treated successfully with a few weeks of antibiotics. Steps to prevent Lyme disease include using insect repellent, removing ticks promptly, applying pesticides, and reducing tick habitat. The ticks that transmit Lyme disease can occasionally transmit other tickborne diseases as well.

However, that’s not all. According to Web MD, ticks can also carry a variety of other awful diseases, such as:

Obviously, ticks are a huge threat to our health when SHTF. That’s why it’s best to start preparing for them now. And one of the best ways to do that is to know what we’re up against, and learn ways we can protect ourselves from these blood-sucking creatures.

Tick Season Is Upon Us: How To Cope

Tick bites are becoming significantly common. That’s because this arachnid’s population has been exploding off the charts in the last few years, making it more and more common for people to suffer tick bites (and the diseases in the list above).

One of the theories behind the tick’s significant population growth is the steady increase of deer population. As deer are often a favorite host of the tick, it’s very likely that more deer = more ticks.

Another theory is that we’ve been experiencing shorter and shorter seasons of freezing temperatures, which often kills off the ticks. As a result, warmer weather = longer and more abundant tick seasons.

Third, as suburbs expand, they are often built on or around wilderness areas (or on land that was originally a wilderness area). This makes a huge difference to the ticks, as they still call this location home – and see these new human residents as new hosts upon which to feast.

Here are some ways to prevent yourself from getting bitten by ticks this season:

What To Do With A Tick Bite

Unfortunately, considering the massive amount of ticks in the world right now, the odds of not getting bitten are pretty low. As such, it’s important to know how to remove a tick to help start the healing process and to avoid further spreading of disease.

As with anything, it seems that people have varying opinions about what the “best way” is to remove a tick. However, it seems that using tweezers to get out the bloodsucker is the most effective method, since it has a low risk of repercussions.

However, there is a method to the madness. Removing ticks with tweezers is an art form that you must perform slowly, carefully, and correctly – otherwise, it can have nasty side effects.

For one, never twist your wrist when you remove the tick. Doing this will cause the head to get stuck into your skin, making it harder to remove. You should also never grab the tick by its abdomen, since this often forces the tick to panic and regurgitate disease into your bloodstream.

Unfortunately, the same is often true for methods involving cotton swabs & soap, vaseline, or burning the tick with a match. These methods might appear to work, but you’ll likely cause the tick to panic, which will cause it to bring more infection into your bloodstream. This can cause you to have rashes, and a host of symptoms days later.

To do it correctly, you’ll need to take the tweezers and move them as close to the skin (and the head of the tick) as possible. Then, using steady, gentle pressure, slowly lift straight up – not moving the wrist – until the tick is safely out. This method keeps the tick from panicking, and allows you to remove it with its whole body (including its head) still intact.

Then you’ll want to dispose of the tick immediately so it doesn’t latch onto you (or your pet, or other bug out group members) again. One of the best ways to do this is to drop the arachnid into a small container of alcohol.

Here’s a video showing you how to properly remove a tick from your skin:

How To Help Your Friends & Family Understand Prepping

Video: Putin Shrugs Off World Leaders as He Attacks Ukraine…

Foods In Your Stockpile That May Poison You