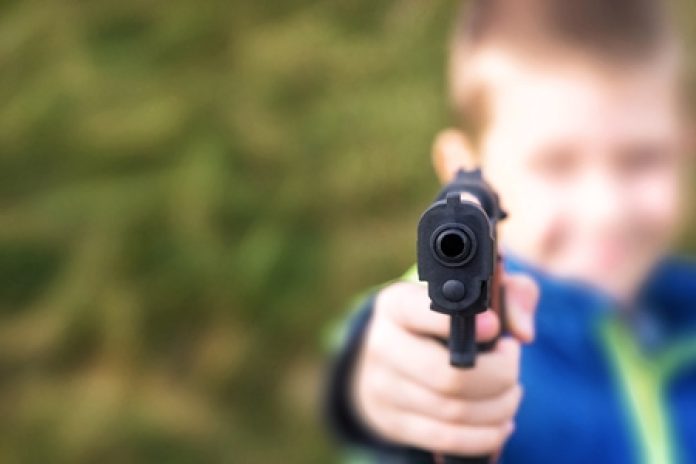 If you’re a fan of firearms then you know how important it is to teach gun safety to your grandkids.

If you’re not old enough to have grandkids and have young children then you know how important it is to teach gun safety to your children.

The simple fact is nothing is more important when it comes to gun safety than education.

Teach your grandchild how to handle a gun and the chances they’ll ever mishandle it are slim to none.

Of course, if you never teach gun safety to your grandkids and they gain access to a gun the consequences could be deadly.

The reason I’ve written this article is simple. Every single year thousands of children die needless deaths because no one taught them proper gun safety. If your son or daughter isn’t teaching gun safety to your grandkids, who is?

Most grandparents and parents mistakenly believe because they don’t own a gun there’s no need to teach gun safety.

I’ll be blunt when I say this is absolutely one of the dumbest things a grandparent/parent could ever do.

More often than not a grandchild or child who hurts themselves or another doesn’t come across a gun in their home. Which is why when they find a gun and have no grid for gun safety the consequences are deadly.

My goal in writing this blog is to make sure you understand how important it is to teach gun safety to your grandkids. Even if you don’t own a gun and never intend to.

With 300 million + guns in the United States, this is an incredibly important subject. So please pay attention to what you’re about to see.

Know This When You Teach Gun Safety To Your Grandkids

Hands down, the most important thing to teach your grandchild or child is a gun is not a toy.

Everyone reading this will nod their head when I say this, but ask yourself this question. If your child or grandchild came across a gun would they know not to pick it up?

I’d be willing to guess they wouldn’t.

Did You Know You Might Be Legally Responsible If Your Child or Grandchild Kills Someone With A Gun?

Protect Yourself By Clicking Here.

I know this is true because I’ve seen it tested out multiple times.

Last year a local news network put several young children (ages 4-5) in a room and left a gun in the room. The gun was made inoperable, but it was a decommissioned weapon, so it was identical to a real a gun.

In almost every single case, children whose parents did not own a gun picked up the gun and pointed it at another child and pulled the trigger.

The only instances where this did not take place was when a child whose parents had taught them gun safety was in the room.

In almost all those cases the child warned the other children not to touch the gun.

This is why it’s so important to teach gun safety to your grandkids. Even if your children don’t own guns (and you don’t either).

Now I know that seems simple, but that recommendation isn’t as cut and dry as it might seem.

This is why I recommend The United States Concealed Carry Association’s (USCCA) DVD on how to teach your grandkids gun safety.

The USCCA is the nation’s largest legal/training organization for firearms and teaches you things you need to know about gun safety. They also teach you how to protect yourself from legal action against you in the event of using a gun in self-defense.

This Is The Next Thing You Should Teach Your Grandkids

After you teach them about the respect they need to have for guns you need to teach them how to handle a firearm.

Now many of you think that’s as simple as taking them to the range and getting them shooting.

When we’re talking about young children, it’s a bit more complicated than giving them the gun and telling them to go to town.

You wouldn’t let a 5-year-old drive a car, would you?

Those same kinds of considerations are yours to take when teaching gun safety.

I can’t begin to outline everything involved with teaching gun safety to your grandkids in this blog post alone. Which is why I recommend this DVD for the best methods.

Take the time to educate your grandchildren on shooting and the chances they’ll ever injure or kill someone by accident are practically zero.

Fail to do it (and do it the right way) and you’re tempting fate in a big way!

I believe teaching gun safety to your grandchildren (or children) is one of the most important things you could ever teach them.

Alongside “don’t go home with strangers,” and “look both ways before crossing the street,” I can’t think of anything more important.

This is why USCCA, the nation’s largest concealed carry group, created their DVD. It’s for parents and grandparents who want the best, most effective information on gun safety.

This is not a free DVD, but it’s worth every penny. You can see more about it along with a message from USCCA’s president right here.

I can’t recommend this enough. Guns are not a problem, they’re not evil either, but they are dangerous and need to be treated with respect.

Use this DVD to teach your grandchildren the best and safest way to handle a gun. Get your copy here now.

Rebuilding Your Home After A Catastrophe