Takeaways from Biden’s first State of the Union speech 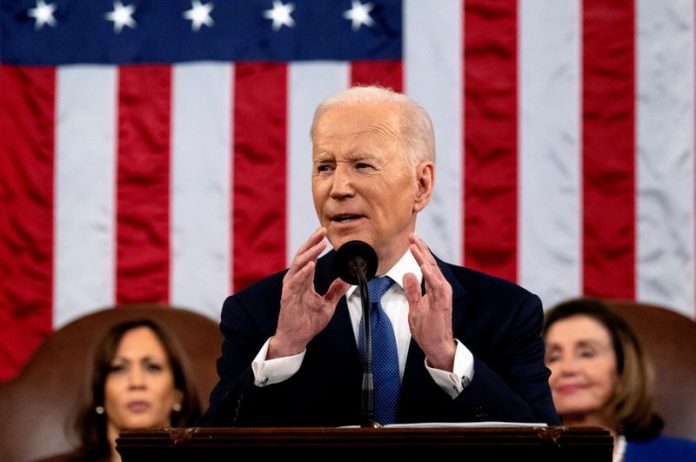 Joe Biden faced a formidable challenge in his first State of the Union speech, after a year in office buffeted by the COVID-19 pandemic, a jittery economy and now Russia’s invasion of Ukraine.

Biden served notice on Tuesday that much of the world is united against Russian aggression while also trying to seize the moment to make Americans feel optimistic about the days ahead.

Here are some takeaways from his speech:

The conflict in Ukraine has given Biden some rare bipartisan support, and the American public is slowly warming to his handling of the crisis.

A new Reuters/Ipsos poll released on Tuesday showed Biden at 43% approval for his response – a jump of nine points from last week. Even with the bump, Biden’s overall approval rating, however, remained underwater at 43%.

In his speech Biden stressed two points crucial to maintaining public support for his actions: He pledged to continue organizing a global coalition to place financial pressure on Vladimir Putin’s Kremlin, while at the same time ensuring that U.S. forces will not be involved in the fighting. For that he received sustained applause from Republicans in the chamber.

“He did a high-level job explaining to the American public why this matters,” said Rodell Mollineau, a strategist and longtime Democratic Senate aide.

Most significantly, Biden warned viewers at home there will be not be a quick resolution to the crisis and that some sacrifices – including higher energy prices – might have to be made.

Those were sobering words coming after two years of wrestling with the pandemic, societal upheaval and rampant inflation. “This is a real test,” Biden said. “It’s going to take time.”

The president sought to use his address to signal that the nation was entering a new phase of the pandemic, one where, as he put it, “COVID-19 need no longer control our lives.”

Aiding Biden’s argument were the optics: There were few masks worn by members of Congress in attendance, and Biden himself wore no mask. All of it suggested that the country was in a different place than just a few months ago.

“That was important for the public to see,” said Mark Riddle, executive director of Future Majority, a moderate Democratic research firm.

Republicans have used school closings in part to mount an all-out attack on Democrats on education issues and plan to continue that ahead of November’s midterm elections, when control of Congress is at stake and Biden’s Democrats are considered vulnerable. Ironic how things get done when there is something to lose that is on the line. Democrats are quickly switching their messaging to appeal to their base, which was hurt, in large, by the excessive lockdowns and bourdon that was imposed over the past few years with COVID-19.

While Biden pledged that the nation would remain vigilant for new strains of the virus, he stressed that the era of business lockdowns and school closings was over. “Our kids need to be in school,” he said, earning applause from both Democrats and Republicans.

A LONG-TERM PLAN ON INFLATION

Biden spent much of the rest of his remarks advancing his largely stalled domestic agenda — and in doing so, also attempted to blunt Republican attacks this election cycle.

He sought to persuade Americans that the way to battle rising prices was to lower costs, either through manufacturing more goods in the country or through making drugs and childcare more affordable.

A problem for Biden and his party is that none of those solutions can happen quickly – certainly not in the time Democrats need to campaign before November.

“His plan, to fight inflation by lowering costs, not wages, and increasing productivity capacity could dampen inflation in the longer term but not in the near-term,” David Chao, a global markets analyst with Invesco in Hong Kong, said.

Riddle said it was important for Biden to stress domestic manufacturing.

“It’s critical to our success moving forward,” he said.

Biden took on the issue of rising gun violence in the nation’s cities by explicitly pushing back against calls by progressives in his party to defund police departments.

“The answer is to fund the police with the resources and training they need to protect our communities,” he said, a line that drew applause from some Republicans in the chamber.

At the same time, Biden called for increased community services and bans of high-powered assault weapons, an appeal to progressives.

Biden’s remarks on crime, inflation, education and, most of all, the pandemic, were meant to send a signal that he understands what Americans have been through during the past two years, Mollineau said.

“We are stronger today than we were a year ago,” Biden said in concluding his speech. “And we will be stronger a year from now than we are today.”

Biden’s messaging was very clear. Be more like a Republican…

Source
Takeaways from Biden’s first State of the Union speech is written by Wolf Daily for wolfdaily.com

13 Insane Ways To Use Garlic For Survival

Milquetoast Mike Pence Still Thinks He Has a 2024 Chance

What Should I Invest In As A Prepper