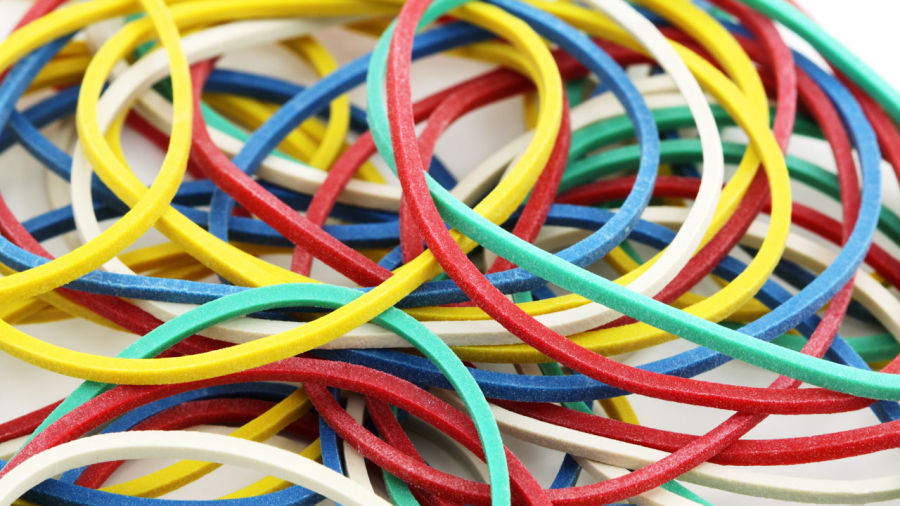 Rubber bands are arguably one of the greatest inventions ever. Unfortunately, very few people use them for much more than holding pencils together and shooting them into their friend’s face.

However, that’s all about to change. That’s because I’ve discovered a ton of new ways you can use rubber bands in a crisis. I’ve also just learned some really cool ways to use these bands in everyday situations. These hacks will make life a lot easier!

But what I want to focus on today is the survival uses for rubber bands. And there’s one use in -particular that I think is a total game changer.

That’s because this simple hack can easily help heat your home in a crisis. This is a huge luxury if you’re bugging out!

The trick is you need to build it correctly.

Well, keep reading. You’re about to become so much smarter once you discover these…

Survival Uses For Rubber Bands You Never Once Thought About

This small rubber band engine is fairly inexpensive and easy to make. This could be perfect for a homestead or bug out home.

Here’s a video explaining the engine and how it works:

How Does a Rubber Band Engine Work?

I have long been a fan of work with smaller devices that generate small amounts of energy, and then pooling that electricity to gain a reasonable amount of power.

While the rates may vary considerably, as well as the amount of heat required, most solid objects will expand when you heat them and contract when they cool. Rubber is like water in the sense that it will also expand as it cools and contract as it heats up. Unlike water, however, it takes much less heat to cause rubber to contract. Therefore, when arranged in combination with metals or other materials, heating up rubber will cause an object to disbalance. This “disbalancing” will cause the object to spin. As the object spins, you can use that motion to generate electricity with magnets and coils.

Will Something Other Than Rubber Bands Work?

Thinking about materials that you can easily obtain, there are no substitutes that will work as well as rubber bands, or be as cheap to obtain in this particular energy generating design.

There are some things you can try and also look for as new technologies emerge:

As a prepper, you may feel a bit frustrated because this particular engine relies on a commodity that may not be available after SHTF.

There are ways to make rubber on your own from various plants, and once you design your first rubber band engine, experiment with growing plants that produce a sap that can be turned into rubber (dandelions, for example). You may have to make thicker bands in order to produce the same level of durability as you will get from commercial rubber bands, it is still worth the effort.

When building a rubber band heat engine, you will need to make sure that you control the amount of heat reaching the rubber bands. Too much heat can damage the rubber bands, so you will usually find that “less is better”.

You will also need to decide whether you will use a bath of warm water, or simply heat up the air around the rubber bands in order to make them contract. Even though you can use anything from old bicycle wheels to cardboard to build the frame for the rubber bands, the engine must have the following parts no matter whether you decide to heat up air or water:

Of all the designs featured on the Heat Engines page, the design by William E. Wiegand will probably lend itself the best to a wide range of power sources.

It also has a fairly large vertical frame, so there is also plenty of room for adding coils. Needless to say, for anyone interested in making a small central coil, this may also be an ideal way to build an electric motor that runs on heat.

Many people are surprised to find out that a rubber band engine is very easy to power. A candle, or even incandescent light bulb will provide enough heat to cause the rubber bands to contract.

In fact, just about any source of heat, even if it is generated as a secondary process (for example, heat thrown off from a running engine) can be used to power the rubber band engine. Just make sure that you can shield the rest of the device so that the central disk keeps spinning.

Here are just a few simple things you can use to power the rubber band engine that will serve a dual purpose:

Why not generate some electricity while you are cooking on these versatile stoves? As with the candle heater, just set the rubber band engine to one side of the stovewhere it will receive sufficient heat. Camp fires, and any other stove that throws off heat can be used for the same purpose.

Using a rubber band engine instead of materials that generate electricity based on thermal transfer will be cheaper and easier to develop into larger applications in the long run.

If you are serious about breaking away from commercial electricity or other commercial power sources, then you will already realize that solar and wind power offer you the best options. These systems have been hijacked by dirty and expensive “green” technologies, there is still a lot you can do at the consumer level to take advantage of them.

The sun produces plenty of heat that can be concentrated, and stored so that you can run the rubber band engine in many different kinds of weather.

Here are just a few devices you can make from stuff in your trash can or around the yard and use to power the rubber band engine:

This device uses little more than old food cans, a wooden frame, some glass or plastic, and pipes in the center of each can. Basically, in this system, the cans are exposed to the sunlight, and cause the air or water in the central tubes to heat up.

From there, all you have to do is let the hot air flow into a room in your home, or let the hot water circulate in a water radiator. To run the rubber band engine, it is just as easy to make a second set of pipes that will blow hot air directly onto the engine.

These devices can produce temperatures hot enough to cook meat, boil water, and bake bread. Just set up a metal coil in the bottom of the solar cooker and set the other end under a metal plate on one side of the rubber band engine. Do not forget to check the temperatures often so that you do not over heat the rubber bands.

The simplest and easiest way to concentrate heat from the sun is to use a shiny object that bounces sunlight onto a piece of metal. As the metal heats up, the radiant energy will disburse near the rubber band engine.

When experimenting with this system, be careful to watch as the sun shifts so that the mirror does not wind up bouncing heat onto dry grass or something else that can catch fire. It can take only a few seconds for to start a fire this way, and a matter of minutes for it to go out of control.

Water absorbs a lot of heat, and can also hold onto it for a reasonable amount of time. If you are interested in purifying water, then you may already know that clear plastic solar lenses or even a simple clear plastic bottle are very important for this purpose. If you let a contained source of water heat up, then you can also use that heat to power the rubber band engine.

Needless to say, if you choose to build a rubber band engine that is designed to work with warm water, then you will not need to concern yourself with transporting the heat to another location.

Most people will tell you that friction is a necessary evil at best, but friction also generates heat. If you are interested in harnessing wind power to power the rubber band engine, you may look for ways to generate friction as the bladed (or bladeless depending on the design you choose) system turns. You can still use oils and other lubricants to reduce wear on parts, and still gain plenty of heat from friction generated by the parts passing each other. It may be as simple as adding a band around standard wind turbine blades (or make them smaller to compensate for the added wind power to overcome drag) that will produce friction.

How to Get Electricity From the Rubber Band Engine

Once you master assembling coils and magnets to generate electricity, using the rubber band engine will not be much different. Even though you may be tempted to make a central coil, do not forget these coil types are harder to wind. Magnets also weigh less and can be distributed more easily, so I still recommend using them on the spinning area of any given power generation system and then leave the coils stationary.

When generating electricity using rubber bands, remember that a rubber band does not have a lot of strength. Even if you can get the wheel spinning quite fast, it will take several modules going on at one time to generate significant amounts of power.

You are better off building ten smaller units that spin faster than one unit that does not move as well or breaks down quickly because of the wear and tear on the rubber bands.

Finally, as with any other power generation system, you will still need some way to even out the current produced, and then store it for later use. You can use anything from earth batteries to store electricity to twisting ropes that can be used later on to spin the wheel in the opposite direction and produce more electricity.

If you have some rubber bands sitting on your desk or in a drawer somewhere, you may not realize that these flimsy objects may be a key to generating electricity, even if they only produce a few volts of electricity, but enough to power smart phones, flashlights, or other useful small devices.

They are also a perfect way to gain a good introduction into harnessing solar power, or even how to build units that can be combined to generate even more power.

Even More Uses For Rubber Bands

Remember, the more we help each other out, the better off we’ll be in the long run. As I always say, Prepare Now, Survive Later!