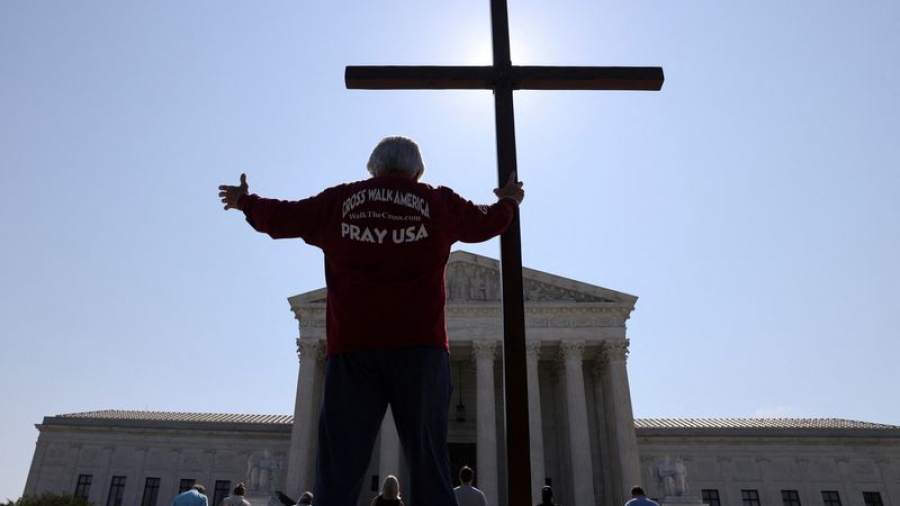 The U.S. Supreme Court on Monday sided with a Christian group that sued Boston after officials rejected a request to fly a flag bearing the image of a cross outside City Hall – one of several cases the justices heard during their current nine-month term involving religious rights.

The court, especially its conservative bloc, has taken a broad view of religious liberty in numerous cases in recent years. Here is a look at some of the cases involving religious rights argued during the current term, which began in October.

In the flag case decided on Monday, the court ruled 9-0 that Boston violated free speech rights protected under the U.S. Constitution’s First Amendment of the Christian group Camp Constitution and its director Harold Shurtleff. Boston had argued that raising the cross flag as Camp Constitution requested under a flag-raising program aimed at promoting diversity and tolerance in the city could appear to violate another part of the First Amendment that bars governmental endorsement of a particular religion.

The court ruled 8-1 on March 24 that Texas must grant a convicted murderer on death row his request to have his Christian pastor lay hands on him and audibly pray during his execution, bolstering the religious rights of condemned inmates. The justices overturned a lower court’s decision against John Henry Ramirez, who appealed the state’s rejection of his request for pastoral touch and prayer while he dies from lethal injection. Ramirez was sentenced to death for a fatal 2004 stabbing outside a convenience store.

In oral arguments heard on Dec. 8, the court’s 6-3 conservative majority appeared ready to further expand public funding of religiously based entities, indicating sympathy toward a challenge by two Christian families to a Maine tuition assistance program that excludes private schools that promote religious beliefs. The families appealed a lower court ruling rejecting their claim that Maine’s program singled them out for religious discrimination in violation of the First Amendment protection of the free exercise of religion. A ruling is due by the end of June.

The court during April 25 oral arguments appeared receptive to making it easier for public school employees to more freely express their religious views, signaling it would side with a Christian former high school football coach in Washington state who refused to stop leading prayers with players on the field after games. The conservative justices seemed prepared to allow such expression of religious views despite concerns that in a public school setting this could be seen as coercive to students or a governmental endorsement of a particular religion in violation of the First Amendment. A ruling is due by the end of June.

(Compiled by Andrew Chung in New York and Lawrence Hurley in Washington; Editing by Will Dunham)