Schumer Wants to Give Amnesty to Millions of Illegal Immigrants 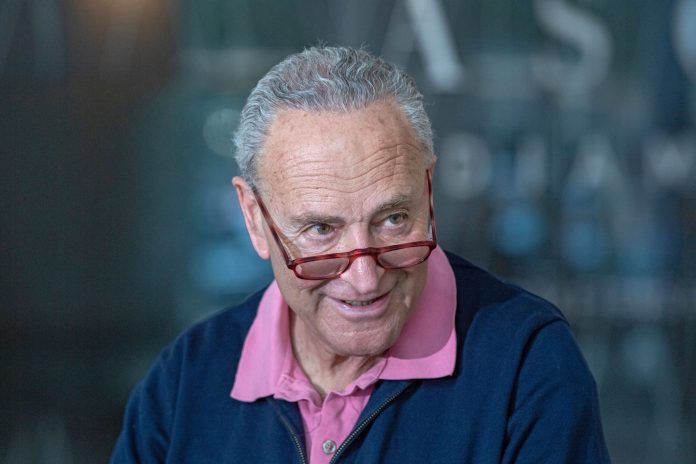 “The “Great Replacement” is just a racist conspiracy theory!”, they say. Then they turn around and say “Well, the native born population is growing slowly, so we need to add a few million illegal immigrants to America’s population rolls.”

That’s not a direct quote, but it’s pretty much the substance of what Chuck Schumer said in a recent speech: in his view, America needs to give amnesty to all the illegals because the native-born American population isn’t having enough kids. Watch him here:

Chuck Schumer says Democrats want to pass an immigration bill because “we have a population that is not reproducing on its own with the same level that it used to.”

Schumer then calls for amnesty for “all 11 million or however many” illegal immigrants in the U.S. pic.twitter.com/Ws3thMaEbw

As you can hear in the video, Schumer, discussing his amnesty plan, said:

Now more than ever, we’re short of workers. We have a population that is not reproducing it on its own, with the same level that it used to. The only way we’re going to have a great future in America is if we welcome and embrace immigrants, the dreamers and all of them because our ultimate goal is to help the dreamers but get a path to citizenship for all 11 million or however many undocumented there are here.

For reference, the 11 million number given by Schumer is a lowball number that was probably far too low years ago. A 2018 Yale and MIT study found, for example, that there could be as many as 22 million illegal immigrants, not “just” 11 million, here.

And that was back before millions started flowing across under Biden’s watch. So how many illegals would “we” be giving amnesty too under Schumer’s plan? Perhaps as many as 25 million or even 30 million people? The real number is unknown, but it seems to be much larger than 11 million, if the Yale and MIT study is to be believed.

With a population of somewhere around 330 million people, the high right of illegal immigrants potentially here, 30 million, being given amnesty would mean that suddenly 10 percent of America would be composed of those who were formerly illegal immigrants, significantly altering the racial mix of the country, and thus voting patterns.

FNC’s Tucker, back in 2021, claimed that the changing racial mix was intentional, that it was being done on purpose by the left.

As you can hear in the video, Tucker said, in the segment titled “Nothing About What’s Happening Is an Accident,” that the current American border policy is designed to “change the racial mix of the country. … In political terms this policy is called the ‘great replacement,’ the replacement of legacy Americans with more
obedient people from faraway countries.”

Rep. Scott Perry, a Republican from Pennsylvania, made a similar claim during an April of 2021 hearing, saying:

“For many Americans, what seems to be happening, or what they believe right now is happening, is, what appears to them is, we’re replacing national-born American — native-born Americans, to permanently transform the landscape of this very nation.”

On the other side of things, Axios, the generally centrist political news outlet, attacked Tucker for the segment in an article titled “A racist conspiracy theory goes mainstream,” saying:

“Replacement theory” or the “great replacement” was popularized in Europe in the 2000s, as believers argued that native white Europeans were being systematically supplanted by non-white immigrants.

The bottom line: WRT is racist. And some U.S. politicians and highly rated TV pundits are saying the quiet part out loud.

The Axios report did not dispute, however, that the racial mix in America is changing. It just said it’s racist to say so.

Source
Schumer Wants to Give Amnesty to Millions of Illegal Immigrants is written by Will for trendingpolitics.com

The Best Ammo For Survival

These Berries Are Great For Survival And Will Keep You Ultra...