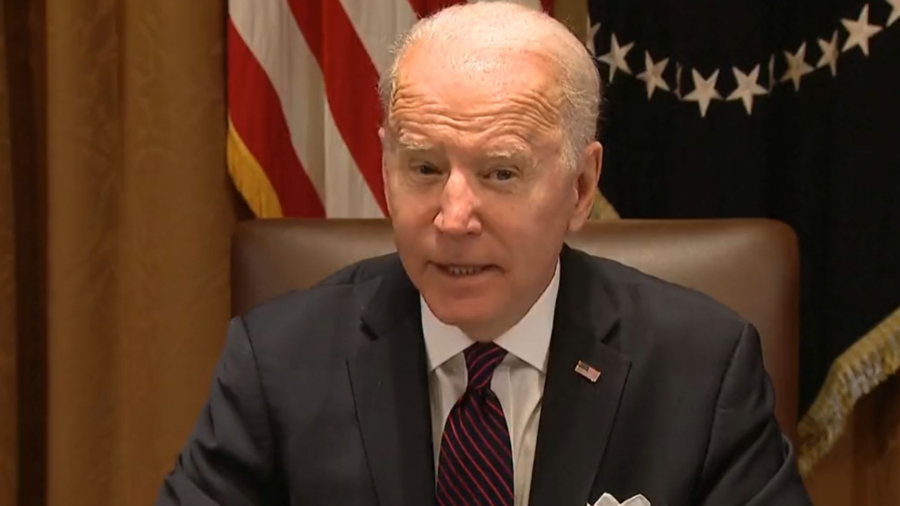 The Biden administration was in full damage control on Thursday after a disastrous press conference on Wednesday when the president appeared to invite a “minor incursion” into Ukraine by Russian President Vladimir Putin.

“It’s one thing if it’s a minor incursion and then we end up having a fight about what to do and not do, et cetera,” Biden said. “But if they actually do what they’re capable of doing with the force they’ve massed on the border, it is going to be a disaster for Russia if they further invade Ukraine.”

On Thursday, sought to clarify remarks about what he meant by a “minor incursion” from Russia into Ukraine.  The remarks “appeared to undermine weeks of intense U.S.-led diplomacy aimed at stopping an invasion of the former Soviet republic,” the Washington Post reported.

“Officials in Kyiv reacted angrily to Biden’s comments at a news conference Wednesday in which he appeared to wobble on backing Ukraine if it were attacked by its larger neighbor,’ WaPo continued. “An array of U.S. lawmakers and world leaders also expressed dismay at Biden’s comments, with some saying the president appeared to offer his Russian counterpart a green light to launch a limited invasion.”

On Thursday, Biden attempted to be “absolutely clear with President Putin. He has no misunderstanding. If any — any — assembled Russian units move across the Ukrainian border, that is an invasion … It would be met with severe and coordinated economic response.” Watch:

“Let me start by first saying a few words about Russia and Ukraine,” he remarked. “I’ve been absolutely clear with President Putin. He has no misunderstanding.”

“If any — any — assembled Russian units move across Ukrainian border, that is an invasion. But it will be met with severe and coordinated economic response that I’ve discussed in detail with our allies, as well as laid out very clearly for President Putin,” he added. “But there is no doubt — let there be no doubt at all that if Putin makes this choice Russia will pay a heavy price.”

However, Biden’s attempt at cleaning up the diplomatic debacle grew increasingly weird.

“That’s also not the only scenario we need to be prepared for,” he said. “Russia has a long history of using measures other than overt military action to carry out aggression, and paramilitary tactics, so-called gray zone attacks and actions by Russian soldiers not wearing Russian uniforms. Remember when they moved into the Donbass with the Little Green Men? They were dealing with those who were Russian sympathizers and say that Russia — nobody in there. Well, that includes Little Green Men and uniforms as well as cyber attack. We have to be ready to respond to these as well in a decisive and united way with a range of tools at our disposal. The Ukrainian foreign minister said this morning that he’s confident of our support and resolve and he has a right to be.”

British Prime Minister Boris Johnson blasted Biden’s bumbling remarks by pointing out that “any kind of incursion into Ukraine, on any scale whatever, would be a disaster, not just for Ukraine, but for Russia.” NATO Secretary General Jens Stoltenberg called for “Russia not to use military force against Ukraine,” pointing to the Biden remark as not being an open invitation to invade.

Meanwhile, Volodymyr Zelesnky, the president Ukraine, responded that even a “minor” incursion into the country would be devastating.

“We want to remind the great powers that there are no minor incursions and small nations,”  said in Kyiv. “Just as there are no minor casualties and little grief from the loss of loved ones.” Foreign minister Dmytro Kuleba said a “minor invasion” would be like being “half-aggressive,” which is an illogical distinction.

Donald Trump, who conducted a successful foreign policy during his four years in office by starting no unnecessary foreign wars, remarked on the Biden presser.

“Well, progress in destroying our country, yes. I think that has been tremendous,” Trump said. “He also said something that I assume was a mistake, but he said he expects Putin to go in. He said, ‘I expect him to go in,’ to go into Ukraine. And I thought that was a very unusual answer. I don’t know if he knew what he was saying because he was — he said that as part of another question and he was a little confused.”

“The whole thing was just so horrible, but you look at the border with millions of people coming in, you look at inflation, you look at no more energy independence, no, we have a much different country than we had a year ago,” he added.

As President Biden’s approval ratings continue to crater, it is no surprise that he is taking on a “rally around the flag” strategy to boost support for his failed administration. The U.S.’s high-stakes game of chicken with Russia and the president’s incoherent saber-rattling may very well push the nation into an unwanted conflict — all due to Biden’s bungled signaling.

Source
‘Russia Will Pay a Heavy Price’ is written by Kyle Becker for trendingpolitics.com