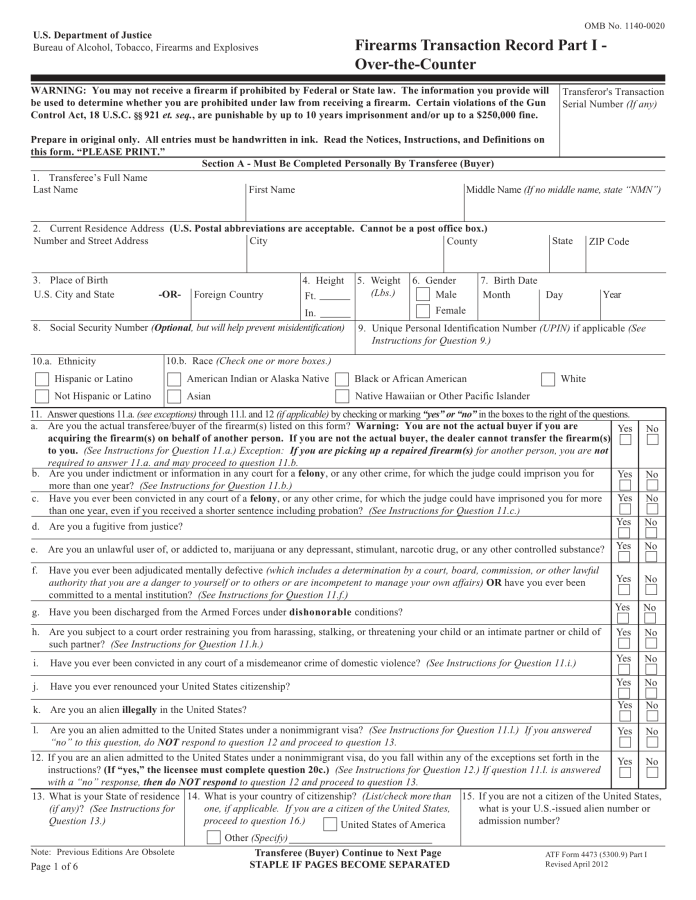 America used to be the land of the free. Now it’s home to controversial gun laws, constant firearm bans, and one very sketchy (but required) gun form.

I don’t need to tell you this is madness at best. But unless you take action now, you will become a victim to their schemes. Millions of people who have died at the hands of their government beg you to do something today.

If you don’t, people will suffer. That’s the bottom line.

In two seconds I’m going to show you how a common, innocent-looking form limits your freedom and puts you in danger.

I’m talking about the ATF Form 4473 – otherwise known as the document gun purchasers fill out before obtaining the firearm.

I’ll also show you the foolproof way to protect yourself from the dangerous effects of this document. I’ll even help you discover ways to get around ever having to fill it out.

I wish what I was about to share wasn’t true, but since it is, you’d better pay attention.

Keep all your guns off the government’s grab list – FREE book shows you how.

If you’ve bought a gun in the last few years at a gun shop or show, they had you grab a pen and fill out this lengthy document. Form 4473 requires you to fill out loads of personal information – even things that aren’t relevant to the firearm purchase.

Once you submit the form, all your personal info goes into the government’s database. This allows them to instantly find you, and to trace any and all firearms you bought back to you.

This poses a threat to your privacy and safety in a variety of ways. For one, until you transfer the gun to another person (where you’ll have to fill out yet another form) the government knows what guns you have at all times.

This eliminates any kind of safety or privacy you think you have. After all, once they know what guns you’ve got, that makes it way easier for them to take them away from you.

Second, since your name and personal info are now in the government’s hands, you can be held responsible for a crime that was committed with your gun… even if you’re completely innocent.

Don’t believe me? Check out this real-life example from The Truth About Guns:

A while back I sold a GLOCK 19 to one of our writers. The gun was stolen from her apartment.

A bad guy used the gun in a crime.

In California, The Golden State detective wanted to know if I was the original purchaser of the firearm. Yes, yes I was. So what? So if I lived in a state with a “safe storage” law I’d be looking at the loss of my gun rights. As would the writer, who was the victim of a crime.

More to the point, the incident drove home the fact that my “harmless” 4473 was a form of gun registration that enabled federal interference in my life — despite the fact that I’d purchased and sold the gun legally. It made me wish that I’d bought all my guns privately, “off the grid.” Or (legally) home-brewed a few.

The sad thing is these aren’t the only reasons Form 4473 is so bad… there are several more.

I’ll get into them in just a second.

But before I do, I need you to understand something:

As a citizen of this free nation, you can resist the government’s assaults on your freedom.

One of the best ways is by getting the FREE book my friend Frank Mitchell wrote – Get It Here for FREE.

Frank wrote this book because he saw through our government’s plans to strip us of our rights. To fight fire with fire, he wrote his book to show you how to use their own laws against them.

I highly suggest you get this book. It will protect you and the ones you love.

Now, to elaborate on the gory details of Form 4473…

The Dangerous “Improvements” In Store For This Form

Ever notice how every time the government tries to “improve” something it eliminates more of your rights?

It all started when Attorney General Jeff Sessions and a bunch of lawmakers made the decision to get on the gun-grabbers’ good side. Ever since then, they’ve been looking for ways to “enhance” the current form in order to prevent bad guys from getting guns.

Unfortunately, all their improvements will do is add more government eyes on us good gun owners.

In December of 2017, police in Hawaii sent out a notification to everyone in the state commanding every legal gun owner who carries a legal medical marijuana card to hand over their guns.

Whatever your stance is on medical marijuana, there’s a bigger picture here. And that’s that, through this form, law enforcement has the power to strip legal firearms away from innocent civilians at will.

Keep your family protected – FREE book shows you how to get around government Gun laws – Get it here.

Classified: How To Get Around Form 4473

It’s unfortunate that it’s come to this, but the fact is there’s nothing about Form 4473 that actually helps Americans. It strips our nation’s people away of our second amendment rights, and it completely disregards our right to privacy.

Not to mention, it leaves innocent people vulnerable to having their guns taken from them and being charged for crimes they didn’t even commit.

However…there’s a way to get around all of this.

The easiest way to fight back and get off-the-books guns for yourself (and I’m not just talking about 3D printed ones, or 80% lowers) is to start reading the Free Arm UpGuide.

The information included in this guide has never been more pressing or relevant than it is right now. After all, gun-haters in the Supreme Court are tirelessly working to implement more widespread gun bans and confiscations every single day.

What’s even less comforting is how gun-grabbers have been so successful at banning firearms right here in our own home states. After all, thanks to lawmakers…

….And this is nothing. As more and more firearm bans are being implemented (or once martial law becomes into effect, whichever happens first) your guns WILL be in danger of being taken by the government.

It isn’t a question of “if,” but “when” this will happen. People’s guns were being taken during Hurricane Irma, and it will happen again if our nation finds itself in a state of civil unrest.

Get your FREE book and keep your guns safe!

How To Protect Your Guns From The Government

If you want to know the best and simplest way to keep your guns (and your rights) safe, you need to start reading the Free Arm Up  Guide.

This is an INCREDIBLE asset for gun owners.

For one, it gives you the valuable instructions you need to keep your guns protected from crooks and thieves.

It also gives you the resources you need to get around potential government bans.

Even more, it teaches you how to never run out of ammo – no matter what.

You can get this FREE book right here.

Here’s just a few of the things the guide will teach you:

When it comes down to it, Form 4473 is NOT for our safety, or for our own good. It’s merely for the government to keep tabs on us and our guns, and to strip us away of our 2nd amendment rights.

Thankfully, the Free Arm Up Guide teaches you how to get around this form, and how to keep your guns off-the-books…for good.

Get your guide today before they’re all gone.