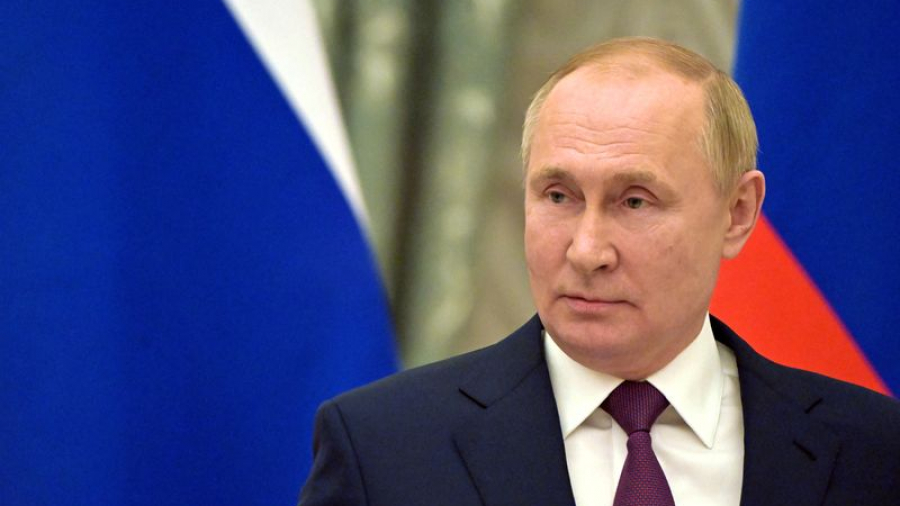 Russian President Vladimir Putin called the West an “Empire of Lies” as he discussed the economy with top officials on Monday following the imposition of sweeping sanctions against Moscow, the Kremlin said.

“(Prime Minister Mikhail Mishustin) and I discussed this topic, naturally bearing in mind the sanctions that the so-called Western community – as I called it in my speech, the ’empire of lies’ – is now trying to implement against our country,” a transcript of the meeting quoted Putin as saying.

Russia’s defense ministry on Monday said its strategic missile forces and Northern and Pacific fleets had been placed on enhanced combat duty, the Interfax news agency reported, in line with an order from President Vladimir Putin.

Defense Minister Sergei Shoigu told Putin that “shifts on duty at the command posts of the Strategic Missile Forces, the Northern and Pacific Fleets, and the Long-Range Aviation Command began to carry out combat duty with reinforced personnel”, Interfax quoted the ministry as saying.

The United States has imposed several rafts of sanctions on Russia over its invasion of Ukraine, targeting its central bank, major lenders and President Vladimir Putin among others, while saying all options are on the table for additional action.

Here are some ways in which the United States could further increase sanctions on Russia.

Experts have said the United States can tighten its existing penalties on institutions it has already targeted and also expand its punitive measures onto other Russian banks.

The United States said last week that U.S. banks must sever their correspondent banking ties – which allow banks to make payments between one another and move money around the globe – with Russia’s largest lender, Sberbank, but did not freeze its assets.

The United States last week also expanded the scope of existing curbs on Americans dealing in the debt and equity of Russian state-owned enterprises. The restrictions apply to 13 firms, including Gazprombank, the Russian Agricultural Bank and Gazprom.

If the United States chooses to tighten its sanctions on banks and firms hit last week, it could use its most powerful sanctioning tool and add them to the Specially Designated Nationals (SDN) list. Such a move would effectively kick them out of the U.S. banking system, ban their trade with Americans and freeze their U.S. assets.

The United States could also target large state-owned enterprises in other sectors, specifically those in the energy sector such as oil giant Rosneft or gas producer Gazprom, said Edward Fishman, who worked on Russia sanctions at the State Department during President Barack Obama’s administration.

State-owned enterprises in other sectors such as in mining, metals, minerals and shipping, could also be hit with sanctions, Fishman said.

Germany last week said it was halting the $11 billion Nord Stream 2 gas pipeline, which was designed to double the gas flow capacity from Russia to Germany. President Joe Biden’s administration lobbied hard with Germany to get it stopped.

Beyond that, the United States has not yet issued strong sanctions targeting Russia’s energy sector, although the White House said such a move was not off the table.

Biden’s administration has been concerned that its sanctions could raise already-high gas and energy prices and has taken steps to mitigate that. When it issued sanctions targeting major Russian banks on Thursday, it authorized energy-related transactions to continue.

“We want to take every step to maximize the impact of consequences on President Putin while minimizing the impact on the American people and the global community,” White House Press Secretary Jen Psaki told ABC’s “This Week” show on Sunday.

The United States and its allies on Saturday moved to block certain Russian banks’ access to the SWIFT international payment system.

While it is not yet clear which Russian banks will be blocked from the network following the announcement, the United States and its partners could further tighten those restrictions and block access of all Russian banks to SWIFT, the world’s main international payments network.

“The most natural escalatory measure is just going to be hitting more and more of the Russian banking sector,” Fishman said.

SWIFT is a secure messaging system that facilitates rapid cross-border payments and has become the principal mechanism for financing international trade.

Each year, trillions of dollars are transferred using the system.

Another move could be to impose a total financial embargo on Russia, likely by issuing a new executive order that would bar Americans from exporting to or importing from Russia goods, services or technologies, said Brian O’Toole, a former U.S. Treasury Department official now with the Atlantic Council think tank.

Short of a full financial embargo, the United States could also issue an investment ban that may also have a chilling effect on Russia’s economy, O’Toole said, adding that it could be tricky to implement. Such a ban would bar Americans and U.S. banks and companies from investing in Russia.

The Treasury Department last week imposed sanctions on what it said were Russian “elites,” including on some with ties to Sberbank, VTB, Rosneft and the Federal Security Service (FSB).

The senior Biden administration official on Saturday said the United States and its allies will also launch a task force to “identify, hunt down and freeze the assets of sanctioned Russian companies and oligarchs, their yachts, their mansions, and any ill-gotten gains that we can find and freeze.”

O’Toole said the United States could still impose sanctions on more significant Russian oligarchs, adding that those listed in Thursday’s action were not “the major tycoons.”

The United States could also enforce secondary sanctions against designated as Russian entities and individuals, which would threaten anyone in the world performing transactions with Russia, Fishman said.

Fishman said the first step would be to add all major Russian banks, companies and government agencies to the SDN list before “aggressively” enforcing secondary sanctions on those doing business with the designated entities.

Source
Putin readies his strategic missile forces while calling the West an ‘Empire of Lies’ is written by Wolf Daily for wolfdaily.com