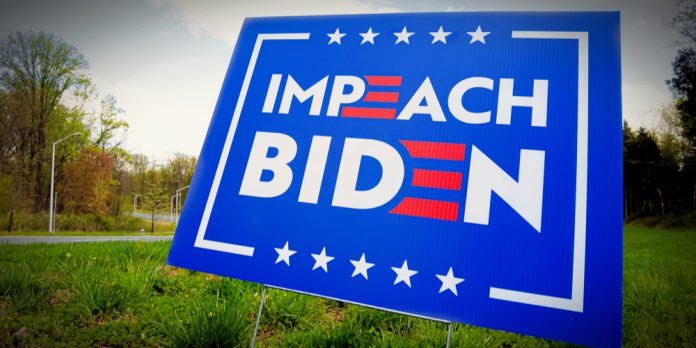 As the November midterm elections approach, Americans face daily inflation, rising gas and food prices, and no end in sight.

Needless to say, this does not bode well for those in power – but it also serves to energize the opposition.

A large majority of registered Republican voters (68%) say a GOP-controlled House should vote to impeach President Joe Biden if the party retakes the majority after the November midterm elections, according to a recent UMass poll. https://t.co/2pQNvnJTzb pic.twitter.com/t0YEk4sV2I

According to a new UMass Amherst/YouGov poll, 68 percent of Republicans want President Joe Biden impeached if Republicans retake Congress this fall after the midterm elections.

And if the country’s economic hardships continue, that figure is likely to rise.

Over two-thirds of those polled want Biden charged with “treason, bribery, or other high crimes and misdemeanors.”

As one might expect, the economy is by far the most important issue on the minds of most voters.

Immigration is ranked second, after abortion and health care.

The top issues for Republican voters, broken down by party, are the economy, immigration, and abortion.

Democrats are concerned about the economy, climate change, and abortion.

Independents are concerned about the economy, health care, and immigration.

According to Republicans, there are numerous reasons to bring impeachment charges against Joe Biden, and this has been discussed for some time.

Even as recently as the fall of 2021, a group of Republicans filed articles of impeachment in response to the disastrous withdrawal of American forces from Afghanistan. At the time, Rep. Bob Gibbs (R-OH) tweeted:

I filed articles of impeachment against @POTUS based on what I believe to be clear violations of his duties. There are dynamics in Congress preventing this from being debated. But I could not stand by while Biden commits flagrant & deliberate violations of his oath of office. https://t.co/LQilZulZpO

Several other items that could spark impeachment proceedings involve possible hearings into Biden’s son Hunter’s foreign business dealings and what, if any, involvement the President had in those deals.

Joe Biden and the Democrats have a lot to be concerned about even before any impeachment proceedings begin. According to a new Associated Press-NORC Center for Public Research poll, Biden has a dismal 39 percent approval rating.

The numbers remain the same when broken down by issue. On issues such as the economy and the Russian-Ukraine conflict, more Americans disapprove than approve of Biden’s job performance.

Joe Biden is also losing ground with a previously reliable Democratic demographic. Hispanic approval has fallen to 26 percent, with a whopping 60 percent disapproving.

Maher Sounds Off on Twitter’s Censorship of NYP, Babylon Bee and...