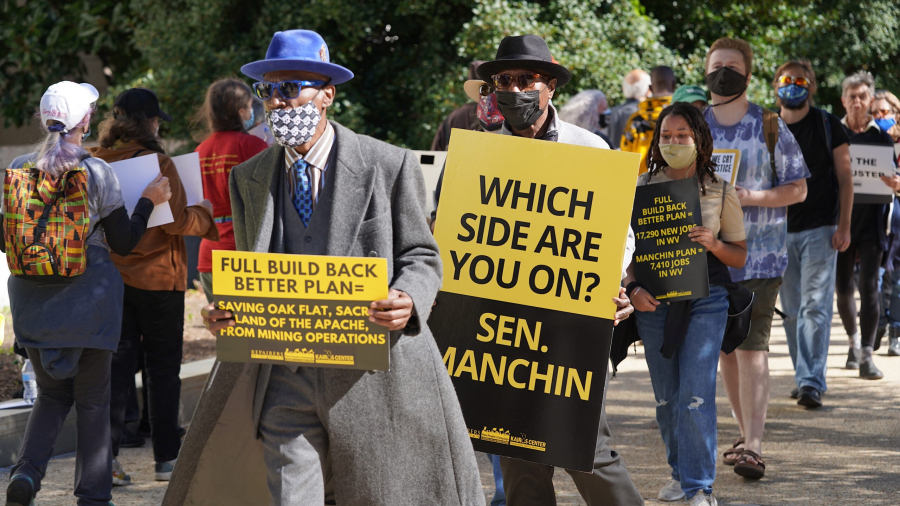 On Thursday the unpopular president, a former moderate from Delaware, called for Senate Democrats to end the over 100-year filibuster rule in order to pass legislation codifying Roe v. Wade via a national guarantee for obtaining an abortion.

The problem is that Biden and his handlers still do not realize that emotionalism has not had an effect on moving the remaining 2 moderate US Senators in their party to vote for ending the well-established and utilized political tool.

The left made the same error late last year while trying to bypass the filibuster to get “voting rights” legislation through Congress: Democratic Sens. Joe Manchin (D-WV) and Kyrsten Sinema (D-AZ) both told Joe – NO!

With the Senate divided 50-50, these two defectors are acting as permanent blocks of the radical left’s agenda.

During a news conference in Madrid on Thursday, a reporter asked the 46th president, “What further specific executive actions are you considering in response to the Roe ruling?”

Biden responded, “I believe we have to codify Roe v. Wade in the law. And the way to do that is to make sure that Congress votes to do that.”

“And if the filibuster gets in the way … require an exception to the filibuster for this action to deal with the Supreme Court decision,” Biden added.

Joe Biden calls for eliminating the filibuster to legalize abortion nationwide until the moment of birth. pic.twitter.com/okoVAdgA8R

The offices of Manchin and Sinema told reporters their views on ending the filibuster have not changed although they wanted Roe to remain the law of the land.

Both Manchin and Sinema’s position on preserving the filibuster hasn’t changed in light of the Dobbs ruling or Biden calling for congress to eliminate it in order to codify Roe v. Wade, their spokespeople tell me

CNN’s Manu Raju tweeted, “Sinema stands by her opposition to gutting the 60-vote threshold despite Biden’s call for a carveout on abortion rights. Her office points to this op-ed: ‘And, sometimes, the filibuster … is needed to protect against attacks on women’s health.’”

Sinema stands by her opposition to gutting the 60-vote threshold despite Biden’s call for a carveout on abortion rights. Her office points to this op-ed: “And, sometimes, the filibuster … is needed to protect against attacks on women’s health” https://t.co/adP0ioNwfJ

The legislation fell short, because of Manchin, in the Senate when it did not meet the 60-vote threshold needed to overcome the filibuster, NPR reported.

Manchin was the only Democratic Senator to not vote to end the debate, resulting in a 49-51 vote. If the WV Senator would have joined in, Vice President Harris would have broken the tie, voting yes.

Manchin said at the time he would vote to codify Roe, but the Women’s Health Protection Act apparently went too far for him.

The law Biden wants to eliminate the filibuster for would:

Manchin’s and Sinema’s opposition to ending the filibuster is based on their concerns that the GOP could use a simple majority in the future to ram through conservative legislation.

Manchin explained during the federal voting rights legislation debate, that changing or manipulating the filibuster rule is “a tough one … because what goes around comes around here. You’ve got to be very careful what you do.”

Similarly, Sinema said on ABC’s “The View,” “People seem to not like the filibuster when they’re the ones who want to pass the legislation.”

“But when we’re in the minority,” she continued, “we being either Democrats or Republicans — we use the filibuster a lot to force dialogue, to bring people together and to make changes.”

Far-left activists are actively looking for a candidate to run against Manchin, hoping to primary his re-election efforts, replacing him with someone who will march in steps with the party’s majority.

Source
No So Fast Biden! Manchin and Sinema Will Not End Filibuster is written by Eric Thompson for trendingpolitics.com