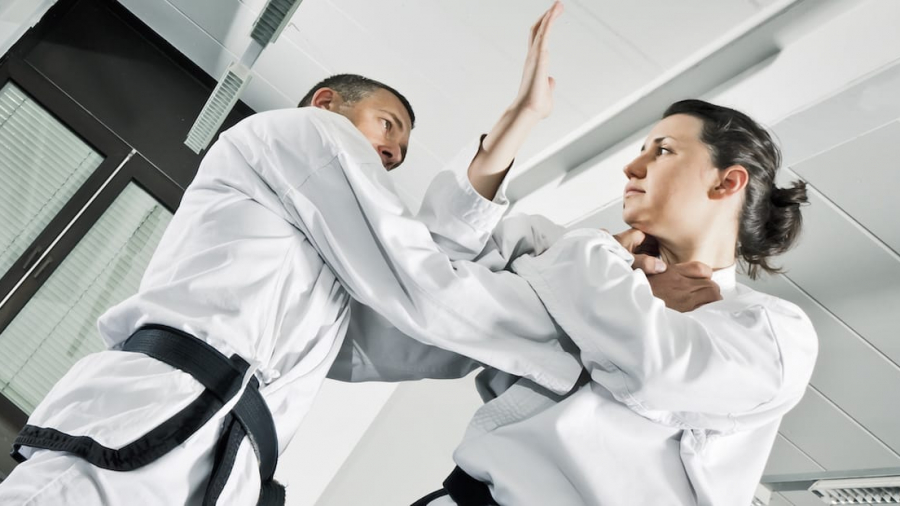 Practicing martial arts for self-defense doesn’t make you a violent person. We are normally against violence, no doubt, but it may become necessary sometimes for defense or protection purposes. Two delinquents out to wrestle your phone out of your pockets could use a good taekwondo strike. Isn’t it? Also, someone could be mugging your buddy or bullying your homegirl.

There are probably a hundred reasons to know martial arts for self-defense. We can’t stop certain people from being violent, but we can defend ourselves and people close to us. You wouldn’t like to see an urchin mug you without even using a gun, would you? I suppose not.

Martial arts are best learned as kids when the bones are much more flexible, and the brain is still very open to new skills. Most forms of martial arts originated in Asia. If you’re familiar with the Asian culture, either through travels, books, or television, you’ll know that kids start practicing martial arts as little as 4.

There’s no blame on them; the ideal time to start martial arts is childhood. However, this doesn’t mean that you cannot become a martial artist as an adult. All it will take from you is an intense focus, dedication, commitment over some years, often depending on how fast you catch up.

So, if you’re interested in martial arts for self-defense, anytime is the right time to start. You are, after all, not going for a kung-fu competition; you’re merely defending yourself.

However, since you’ll be starting as an adult, you have to make certain considerations before selecting a form of martial arts. We’ll look at these factors briefly before continuing.

the reason you’re trying out martial arts is important. True, martial arts, in this context, are geared towards self-defense, but that’s merely a byproduct. For stress relief and fitness, Aikido and Tai Chi are ideal. For agility and flexibility, stick to taekwondo or karate.

If your focus is combat training, great options include Krav Maga, Kendo, Judo, and Jiu Jitsu. Martial arts help to improve heart health as well, and if that’s your goal, try Capoeira or Muay Thai.

Martial art is a great way to harness the energy of an active, restless individual. Similarly, if you’re a calm, quiet person, there are more deliberate and contemplative martial arts that fit your personality.

In martial arts, the mind is strongly connected to the body. That explains why you must settle for a form that agrees with your physique and personality.

There are over a hundred forms of martial arts, with countries like Korea and Thailand developing their personal arts to join the classics of the Japanese and Chinese. Out of them all, however, we’ll focus on the finest recommendations for self-defense. Here we go.

Jiu Jitsu remains one of the earliest and most popular forms of Japanese martial arts, although it was initially reserved purely for Samurais. It has different variations, such as Judo and Aikido, and is therefore ideal for fitness, stress relief, and combat.

It was developed to help the samurai fight after running out of arrows. So, you see, it is specifically targeted at fighting without weapons. This form of martial arts focuses on using the enemy’s aggression against him in such a way that you don’t only stop his attacks; you are also able to launch a successful counterattack.

Taekwondo is a prevalent form of martial arts, and rightly so. It is over 5000 years old, with its inception synonymous to the very beginning of Korea as a nation. It was developed by the HwaRang of the Silia tribe to combat more powerful opponents. Later on, Won Kang—a Buddhist monk—refined this technique to involve the mind and body.

Over the years, taekwondo has undergone various modifications and processes, but this version we know now was agreed upon in 1955. That was the year the conflicting schools of the art reached a common decision.

High spinning kicks define taekwondo. There is no ground fighting or grappling—just kicks. Never make the error of underestimating this technique. Taekwondo kicks are extremely dangerous and are hence highly effective.  Lest I forget, taekwondo is the only form of martial arts accepted in the Olympics.

Well, having looked at safer forms of martial arts, why not something deadlier, quicker and much more effective? Krav Maga is the official combat style of the Israeli Army, does that ring a bell? It should. Krav Maga is one of the deadliest forms of martial arts. Unlike the two discussed above, it is not for all-round self-defense; instead, it is ideal for intensely dangerous situations.

Krav Maga was created by a Jew in the 1930s to defend himself and his family from the rising, terrifying anti-Semitic groups. It originated from the streets, and I hope that explains why it’s so rough.

Krav Maga is centered on three principles. The first is to counteract an attack; second is to attack and defend simultaneously; and the third and most revered is to attack the weakest, most vulnerable parts of the body, such as the groin, eyes, neck, face, throat, and fingers.

Learning Krav Maga does not take as long as the purer forms of martial arts. A year is enough time to be a maestro in the art.

Some of us may still be opposed to martial arts for self-defense, and I understand why. Expertise in martial arts by a bully can be a scary prospect, but wouldn’t you have to defend yourself from the bully?

Well, your first thought might be grabbing a weapon, but what if you can’t find any stick or iron nearby? Wouldn’t you prefer if your hands, legs, and head were the ultimate weapons in your arsenal?

Furthermore, martial arts is a great way to improve cardiovascular health, stamina, flexibility, strength, and courage. So, martial arts it is—isn’t it?