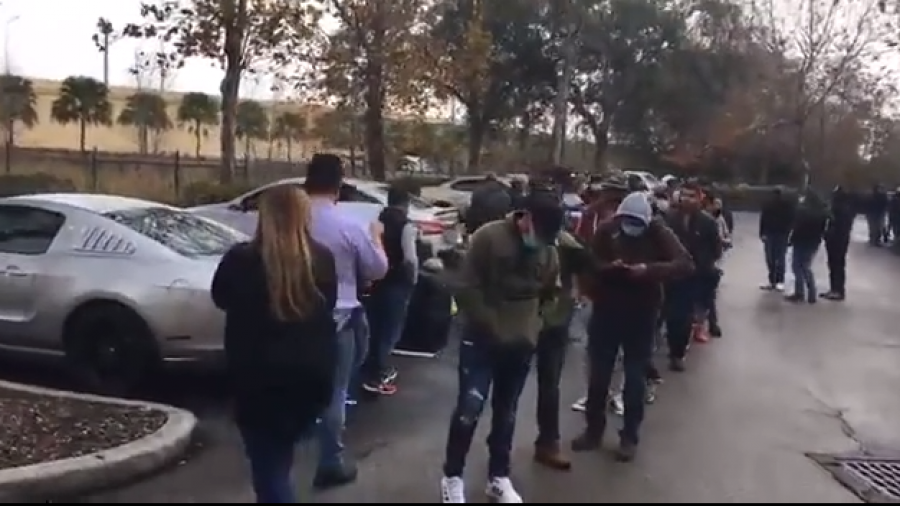 The United States is under attack from within; internationally via George Soros, the United Nations, and the World Economic Forum in Devos, Switzerland.

The Biden administration has removed all of former President Donald J. Trump’s successful immigration policies in addition to stopping “the wall” from being completed. All of the international players are funding the invasion of millions of illegals from around the world, pressuring banks and corporations to move to ESG scores.

When adding in the massive number of VISAS and the Marxist indoctrination taking place in the U.S. education system, the day of reconning is at hand.

The Divided States Of America is at risk of collapsing unless patriots rise up and put a stop to the national coup d’etat that is underway.

Laura Loomer posted a new video on Sunday showing a line of military-aged, illegal alien males, being dropped off in front of an Extended Stay hotel in Maitland, Florida.

The Congressional candidate sent this out:

A video just filmed in Maitland, Florida, which is just minutes outside of my Congressional District in Florida 11 shows a bus of Hispanic illegal aliens, ALL MEN, being dropped off in front of an Extended Stay hotel in Maitland where they are being given pre-loaded credit cards, hotel rooms, and clothing.

My soon-to-be constituents are very upset about this, as am I! How many of these illegals will commit crimes in neighboring counties? I doubt these illegals were tested for COVID or any other diseases!

PS: Where is my opponent Dan Webster on this clear invasion into Florida which without a doubt is going to be impacting district 11!

This is why when I’m in Congress, I will be creating legislation to have an IMMIGRATION MORATORIUM!!!

We are being invaded and it’s disgraceful that illegal aliens are being given credit cards, clothing, and hotel stays on the taxpayer dime when we have homeless veterans and homeless American families who are sleeping outside in the cold this weekend as Florida experiences historically cold weather in the thirties.

Governor DeSantis needs to immediately send ICE to raid that Extended Stay hotel and deport every single one of those illegal aliens who were just dropped off on four busses outside of my district in Maitland, FL!

Governor DeSantis was right when he said that the Biden administration is bussing and flying illegal aliens to Florida ahead of the 2022 midterm elections.

It’s time for these illegals to be rounded up and deported to Joe Biden’s home state of Delaware, as Governor DeSantis said he would.

I support our Governor 100% and as someone who has physically rounded up illegals myself and brought them to the home of Nancy Pelosi at her mansion in Napa Valley, I am happily willing to help round up these illegals in Maitland, FL and make sure they are deported from Florida.