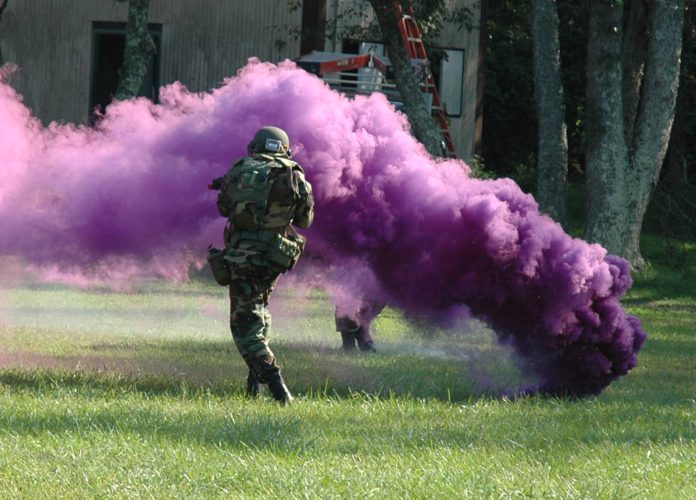 See, that’s a crying shame to me, since this easy-to-build survival tool could easily save your life in an emergency.

Smoke grenades have been immensely popular in many wars, such as the Vietnam War. During battle, these handy items could provide a smokescreen, distracting your enemy and providing you a moment to escape/shoot.

Plus, it’s hard to see in and through the heavy smoke. This causes the enemy to have a harder time firing at you.

They’ve also been utilized in helping you get found by rescue teams. Once the smoke heads up to the sky, you can be easily spotted by land, water or air to get you to safety.

Many veterans are also aware of the various colors a smoke grenade can control. For example, according to Ask A Prepper:

“Each unit designates the meaning and purpose for each color (white tends to be used to mask movement/confuse enemy, etc. only). Sometimes each mission may dictate different color signals for different meanings (lift & shift fire, phase line reached, extract, etc.). In other situations, different colors are meant to mark positions for aircraft to verify that the force on the ground popping smoke is who they say they are.

In peacetime red typically meant that there is an injury and all training is to be halted until the injury is addressed. [Red] and Orange are internationally associated with the distress signal.”

Better yet, when used correctly, smoke grenades are perfectly legal to have and use. As Ask A Prepper states:

“Non-military uses of smoke grenades vary from signaling your position in case you are lost to fireworks, paintball games, self-defense, protests, spectators, and airsoft enthusiasts. However, the smoke grenade class is restricted to signaling and concealment under the laws of war, and thus they are not considered weapons. The smoke grenade remains legal for civilian use and ownership in most countries.”

So now that we know a little more about this useful survival tool, we need to learn…

Surprisingly enough, anyone can learn how to make a smoke grenade. In fact, if you’ve got access to a garden center, a crafts store (like Hobby Lobby) and a Dollar Store, you’re halfway there!

Need to learn how to make a smoke grenade FAST? Watch the video below (it’s less than 3 minutes long). The whole process takes about 1.5 hours, and the results are SO WORTH IT.

The main ingredients that make this work are sugar and potassium nitrate. Oddly enough, Spectracide Stump Remover contains these ingredients. Like I said, if you’ve got a garden center near you, you’re halfway to making these on your own.

How To Make It:

Pour the stump remover and sugar into a small pot. Heat on Low and stir constantly. You’ll notice the mixture begin to caramelize. Keep stirring until the mixture has a thick consistency, resembling smooth peanut butter.

Now add the baking soda and stir in completely. Then add the organic dye powder, stirring until the contents are thoroughly mixed.

Next cover one end of the toilet paper roll (you can use paper or duct tape). Fill the tube with your mixture leaving about 1/2″ space at the top. Then take the pen and push it all the way through the center of the mix. Leave the pen standing in the mixture for an hour.

After the hour has passed, remove the pen from the mix. Next, take your firework fuse and place it into the hole. Roll the cotton ball into a long tube, and shove it down into the hole next to the fuse. This will help plug up the extra space.

Next wrap the entire tube (top, bottom, and all around) with duct tape. Make sure to leave the hole at the top exposed so that the fuse is sticking out.

Now here comes the fun part. Take your smoke grenade into an open space and light the fuse on fire. You’ll stand in awe as the air is filled with your colored smoke in just a matter of seconds!

How To Make A Smoke Grenade: The Video

Need a visual? Take a look at the video below (and click “CC” for captions):

Isn’t that cool? Like I said, I think everyone needs to know how to make a smoke grenade. It’s just good sense when preparing for a crisis.

My advice is to make one of these and try it out for yourself first. That way you can be confident that you have the right tools and measurements for the job. You’ll also be able to see how powerful this mechanism is at helping you escape in a crisis.

Once you’ve tried it for yourself, it’s time to make a few extra for your bug out bag/survival kit. Make sure to also bring a lighter (or two) so that you can light it quickly if you get in a tight spot.

Try these out for yourself and let me know what you think in the comments. Got more advice or another way to make these? Let me know! The more we help each other out today, the better prepared we can be tomorrow. Remember, Prepare Now, Survive Later!

Biden Taking 3:10 to Yuma, Finishing Trumps Border Wall on the...

An Alternative Fuel Source That Could Save Your Life