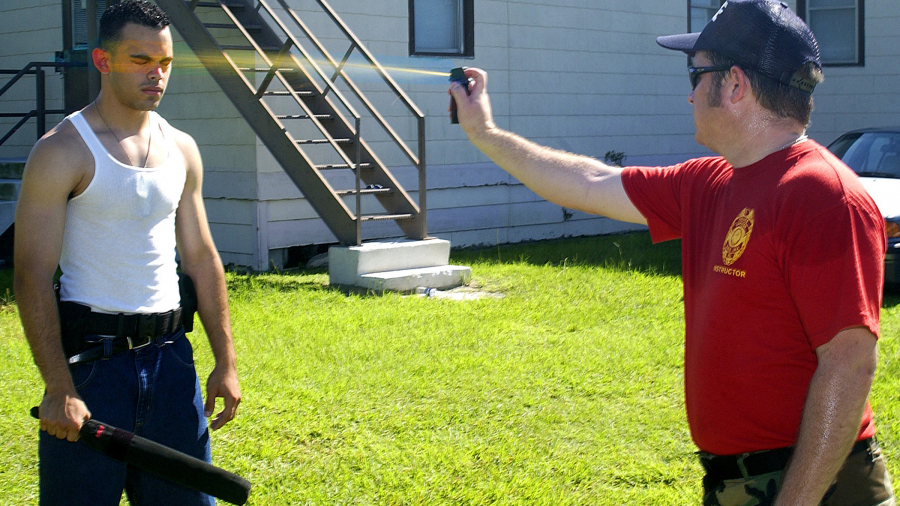 Pepper spray is one of the most effective self-defense tools around. Now, sure, it’s not lethal. So it may not be as effective as a gun (or even a knife) at fully stopping someone in their tracks. However, when it comes to deterring an attacker so you can escape (or grab another weapon) there’s almost nothing better.

Whether you’re a college student, a working professional, or are loving retirement, everyone needs a container of pepper spray on them. There’s just no better way to temporarily blind and deter an attacker in a sticky situation. Plus, it’s so compact nobody has to know you have it until it’s too late.

One of the best things about this invention is that it can get into a lot of places that you can’t take a gun into. For instance, you just can’t bring a gun into many government buildings and airplanes.

However, a compact pepper spray container can get into almost anywhere. I’ve even heard people carrying pepper spray in their purse or pocket and walking through airport security without so much as a second glance.

It’s great to know that everyone can prepare and become ready for anything with this handy device. And the best thing is, there’s a ton more to know about it! Keep reading some more information you’ll need to know when investing in this excellent survival tool.

How Pepper Spray Can Spice Up Your Self-Defense

What Pepper Spray Is

Store-bought pepper spray typically consists of three main chemicals that cause the burn in the victim’s eyes. According to Survival Life, these include:

“Orthochlorobenzalmalonitrile – CS, Alphachloroacetaphenone – CN, and OleoresinCapsicum – OC. The CN and CS chemicals cause extreme irritation in membrane tissues and cause the stinging sensation on the skin and especially in the eyes. This stinging typically lasts about five to 30 seconds.”

“The OC chemical component of pepper spray causes an inflammatory and involuntary reaction on the eyes. It causes a temporary lack of vision and extremely and immediately dilates the capillaries.”

However, most preppers don’t know they can actually make their own pepper spray! Check out the video below to see one way to make it for yourself.

Unfortunately, even pepper spray is not without its drawbacks. If the person you’re spraying is drunk, is on drugs, or has an extremely high tolerance for pain, the spray may not be as effective. In these cases, it may even become ineffective, so make sure to have a backup plan if at all possible.

Be aware that laws regarding pepper spray vary state to state. For example, in certain states, any individual with a past felony conviction can not carry over 4 oz. of pepper spray.

However, in many states, any person over the age of 18 years old can legally carry pepper spray. Make sure to check your state’s laws before attempting to purchase pepper spray.

Here’s some more valuable information about pepper spray from the writers at Survival Life:

This is one of the most commonly carried forms of pepper spray and typically comes in a 1-ounce or ½-ounce canister. It has a circular spray patterns that is about 2-feet wide, the average size of a human or large dog head. It is known to have a viable spray from about six to 12 feet.

This type of pepper spray has wider dispersal area and has a fine droplet spray stream. Because of the manner in which it sprays, the accuracy of the aim is slightly less critical. It may be the best type of pepper spray to use when faced with multiple attackers or during a riot. A significant amount of forced spray comes out of the canister with every squeeze and it is inhaled a bit more quickly than a cone spray – causing more intense and rapid coughing and choking.

The steam or broken stream version of pepper sprays act in the same type of fashion as a squirt gun. They deliver a more liquid version of pepper spray at the target. More of the spray is used up quickly with each squirt than when using a forced cone or fogger spray, but the risk of blowback due to wind direction is far lower and the powerful stream has a longer range of effective action.

The wind has the least effect on this type of thick pepper spray. It sticks to the face, eyes, and skin more deftly and is very difficult to wipe away. The more the target rubs it to get it off the skin, the more active its effect.

Unlike using a gun or knife on a potential attacker, pepper spray will not incapacitate the individual. But, it will sting the heck out of his or her eyes long enough to give you a chance to escape. Once the chemical gas is released from its canister, a burning sensation typically happens almost immediately on the skin of its intended target. Next the target’s eyelids slam closed and they begin to cough or choke.

These results are typical, but cannot be counted upon to always happen. A quick search on YouTube will quickly reveal how drug-crazed individuals refuse to go down after not only having had pepper spray used on them by police officers, but being the target of a Tazer gun zap as well. The best chance at escaping an attacker when armed with only a non-lethal weapon is to aim as accurately and rapidly as possible then run away screaming to draw attention to the incident as quickly as humanly possible.

When in a panicked state, you might not take the time to gauge, or even consider, wind direction. This could be a fatal mistake. Using pepper spray when the wind could blow the chemical gas back at you instead of its intended target, would leave you completely vulnerable to the attacker.

Shake the pepper spray canister at least once a week. This helps ensure the chemical gas mixture remains active and effective. Store away from either extreme heat or cold. Leaving a can of pepper spray in the car during hot summers and chilly winters might render them ineffective. Unfortunately, you would not know until you had to use it – and then it is too late.

How To Use Pepper Spray