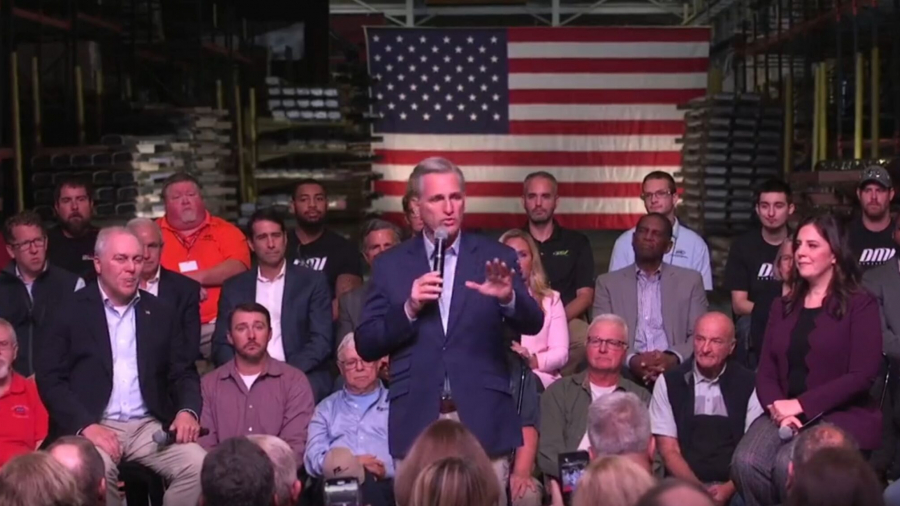 House Minority Leader Kevin McCarthy announced a “Commitment to America” platform on Friday. Its first proposal in the agenda should be a popular one.

“If you trust us, hold us accountable,” McCarthy said. “We’re putting it out to the entire country. This is what we’ll do. But on that very first day, that we’re sworn in, you’ll see that it all changes. Because on our very first bill, we’re going to repeal 87,000 IRS agents. Our job is to work for you, not go after you.”

The House GOP’s proposal comes at a time when many Republican voters have been growing concerned over the party’s silent tolerance as the Biden administration has heaped a long train of abuses against the American people, and particularly, violating their rights and the rule of law.

A summary of the Republicans’ “Commitment to America” follows below:

A Future That’s Built on Freedom

There are some political observers who would like to see more vocal condemnation of the Biden administration for its flagrant disregard of the rule of law and its weaponization of the U.S. government to push a heavy-handed left-wing agenda.

“Kevin McCarthy right now giving speech in PA to roll out GOP new campaign agenda,” Julie Kelly noted on Twitter. “I understand this is a summary but I hope the short shrift given to widespread government abuses (DOJ, FBI, CDC, DHS, NIH) is more detailed over the next several weeks.”

Andrew W. Coy at the American Thinker eloquently expresses the feelings of many conservative voters that we are now witnessing a truly “evil” government.

“Why would Biden’s FBI and Department of Justice cover up obvious felony crimes on Hunter Biden’s laptop, yet search the bedroom of President Trump’s teenage son?” Coy asks.

“Why would the FBI and DoJ ignore the 4th and 5th Amendments in their illegal raid on President Trump’s private home?” the piece continues. “Why would the FBI/CIA/NSA disregard all precedents, all laws, all tradition, the Constitution, and all common sense in their illegal attacks on President Trump since he came down the golden escalators? Why has the FBI/CIA/NSA abused and misused the Patriot Act in their attack on Biden’s political enemies? And why has the ACLU remained totally silent and mute as these Third Reich tactics have been used on the American people?”

“Why has Biden/FBI/Justice Department carried out Stasi police state raids on many of President Trump’s closest supporters?” he adds. “Why has law enforcement harassed, badgered, and even arrested, Giuliani, Bannon, Roger Stone, Steven Miller, and many others? Why is political dissent, questioning the 2020 election outcome, and First Amendment rights under siege? Why are the J-6 marchers still jailed without formal charges and bail being afforded to them?”

The piece continues on. It demonstrates there is a major disconnect between the Republican leadership and a conservative base that is seriously disturbed by the Biden administration’s blatant disregard of the U.S. Constitution and its frankly un-American approach to governance.

McCarthy’s tone-deaf ‘politics as usual’ approach is one reason why he might struggle to maintain leadership of the Republican Party, even if his “Commitment to America” agenda appears to be a sensible step in the right direction in the eyes of many American voters.

Source
House GOP Announces ‘Commitment to America’ — Its First Proposal Should Be Instantly Popular is written by Kyle Becker for trendingpolitics.com