Harris Takes Meeting With Religious Leaders, Fails To Mention The Most Important Thing 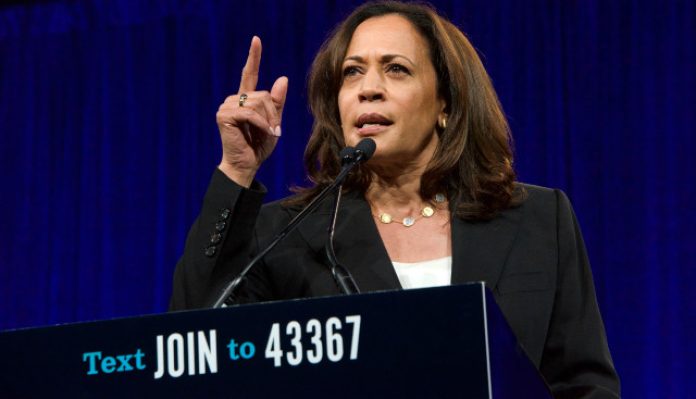 Vice President Kamala Harris, a woman who has become notorious for the dirty deeds she was willing to do in order to further her own political career, recently held a meeting with religious leaders concerning the issue of abortion, where she called for “more faith in each other, in our nation, and in our future.”

Guess what she forgot to mention during the meeting?

That’s right, folks. Our vice president spoke during a meeting of religious leaders to talk about one of the most important issues facing the country today, and never made mention of God, the Almighty Creator from Whom all of our rights flow. Not even once.

Guess we shouldn’t be surprised.

According to a report from The Washington Examiner, Harris was in Los Angeles on Monday where she met with religious and faith leaders for a roundtable discussion, which she said was to address “protecting reproductive rights [and] addressing the epidemic of hate that is gripping our nation.”

Today I am meeting with faith leaders to discuss the most urgent challenges facing our communities, from protecting reproductive rights, to addressing the epidemic of hate that is gripping our nation. Faith leaders are essential to our nation in this moment.

In the address, Harris stated, “There’s so much more in common than what separates us.”

Now, I’m pretty sure that many a soul has been preaching that message for years now, however, it’s been those on the left side of the political spectrum who have stoked the flames of division in America to ensure the fire never burns out.

“We need faith in each other, in our nation, and in our future,” she told those in attendance. “And so, that’s why we are coming together today with a goal of instilling in folks a belief that gives them a sense of hope and optimism in themselves, in their community, and our future,” Harris continued.

Harris then encouraged the leaders attending the meeting to not look at support for abortion as “giving up core beliefs.”

“It is simply about agreeing that a woman should be able to make that decision with her faith leader, with her family, with her physician, and that the government should not be making that decision for her,” Harris went on to say.

The vast majority of religious people, leaders included, in the United States believe that God — or whoever they worship — has placed a high value on human life. How is it not “giving up core beliefs” than to support the murder of a human being during the most vulnerable time of his or her existence?

Other religious leaders who did not attend Harris’ meeting reacted to the vice president’s comments on social media.

The Susan B. Anthony Pro-Life America group pointed out that Harris avoided using the word “abortion.”

During her “roundtable with faith leaders on reproductive health care” today, Kamala Harris somehow managed to avoid saying either “God” or “abortion” even once. https://t.co/QZk7RQtUB4#ModernizeOurLaw

Here are more details from the Washington Examiner:

Andrew Brennan, the Republican National Committee’s director of faith communications, slammed the roundtable discussion as a display of how “out of touch” the Biden administration is concerning what matters to the public.

“Families can’t afford gas or groceries because of Joe Biden, and yet all this White House wants to talk about is their radical late-term abortion agenda — they couldn’t be more out of touch if they tried,” Brennan went on to say in a statement.

Ken Ham, the man behind the Answers in Genesis organization made his own call for faith in God rather than people.

Kamala Harris is quoted saying “We need faith in each other, in our nation and in our future.” What we all actually need is faith & trust in our Creator God & Savior, & to know and believe His Word. But then she would have to give up her support for… https://t.co/aQFsKsNETM

“What we all actually need is faith & trust in our Creator God & Savior, & to know and believe His Word. But then she would have to give up her support for sacrificing children in their mother’s wombs,” Answers in Genesis CEO Ken Ham said in his post.

At yesterday’s “faith leaders round table” on abortion rights Kamala Harris said “We need faith in each other, in our nation, and our future.” No mention of God. Biden Administration is spiritually bankrupt. https://t.co/1UNltrbPj8

The vice president’s roundtable talk comes a month after the draft of the majority opinion in the Dobbs v. Women’s Health Organization ended up being leaked. The document seemed to indicate the Supreme Court had voted to overturn the infamous Roe v. Wade decision, which would then give authority to pass laws regulating abortion back to the states, which is right where they belong.

Source
Harris Takes Meeting With Religious Leaders, Fails To Mention The Most Important Thing is written by michael for trendingpolitics.com

How A Simple Leather Belt Makes An Outstanding Survival Tool

RINO Romney Gets Some Terrible News