This Hard Survival Food Is Ideal For SHTF! 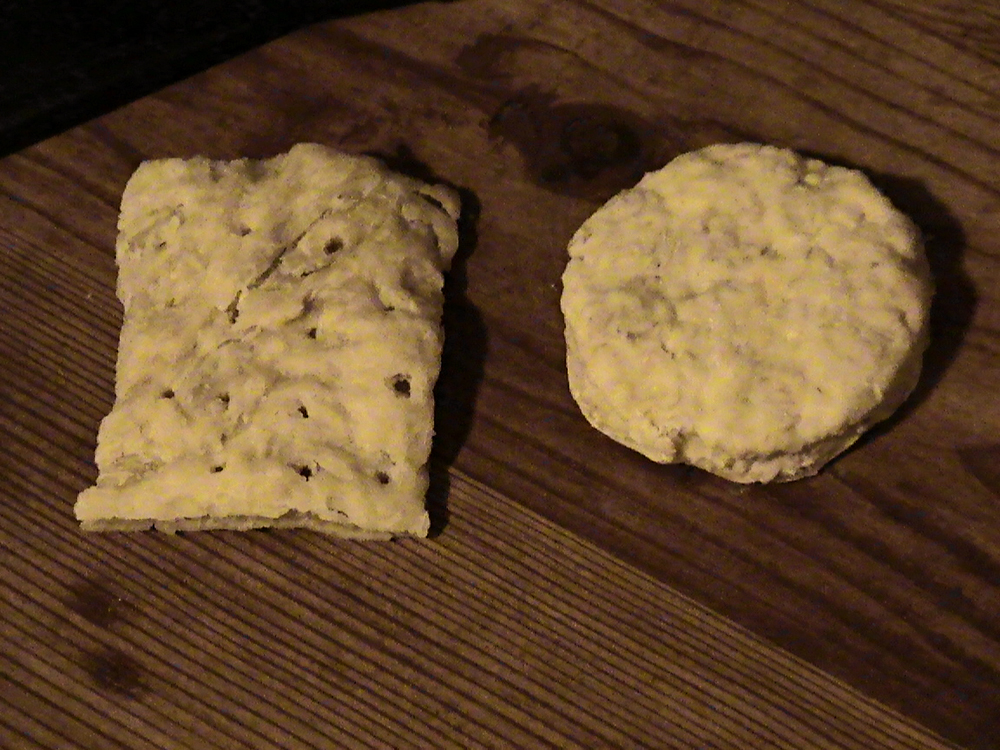 This incredibly hard survival food may be difficult to crack, but it can be worth it during an emergency!

Hardtack is no stranger to soldiers. Back in the Civil War, soldiers would eat this food to sustain themselves while on the battlefield. In fact, the British Navy would also eat hardtack while on long voyages.

This biscuit is known by many to be an ideal survival food. Not only is it inexpensive to make, but it also stays edible during its incredibly long shelf-life – 50+ years!

There’s no doubt that hardtack has been helping save the lives of our nation’s finest for years. And that’s why, in order to prepare for an emergency, I want to show you how to make it, too.

This Is The Hardest Survival Food In The World

How To Make It

First, preheat the oven to 375°F. While it’s heating up, combine the flour and salt in the bowl. Then very slowly pour in the water as you stir. Do this until you’ve got a pliable dough that isn’t sticky.

Use the rolling pin to roll the dough into a large square. Make sure to roll it thin enough so it’s less than 1/2-inch thick. Using the knife, cut the dough into nine equal squares.

Then, pick up the nail and insert it all the way through the dough. Make 16 holes in each square with the nail. This is important, as the holes allow moisture and air to get out.

Break the squares apart, and set them on the baking sheet with about an inch in between each one. Do not spray or grease the sheet beforehand.

Place the baking sheet in the oven, and let it bake for 60 minutes. Flip them over halfway through to evenly cook both sides.

After an hour, take the baking sheet out and let the biscuits cool. They should be slightly brown in color.

Once they’re completely school, place each biscuit into a bag and seal it tightly. Make sure to add these to your survival kit, bug out bag, camping gear, and food stockpile for safe keeping.

Things To Know About Hardtack

Generations have found hardtack to be an incredibly useful, long-term survival food. After all, it’s cheap, it’s easy to make, and simple to ration out. Not to mention, it lasts for an impressively long time.

And, at just 150 calories per biscuit, these are great for helping sustain you throughout the day.

So hard you may be able to use it as a self-defense weapon in an emergency.

Hard enough that you may not be able to actually eat it without the right methods. Otherwise, your teeth may well break off…

As you probably saw from the video, this stuff is real hard to make edible.

However, many preppers have found success with it. Plus, heck – the soldiers had to eat it, right?

One of the ways people have been able to eat this incredibly rocklike biscuit is by soaking the cracker in water, and then frying it in salt pork fat before topping it with sugar. Sure, not the healthiest option, but it sure sounds good!

Others have said that crumbling it in hot soup makes it worth eating. However, the question is how they got it to “crumble” in the first place…

Make it for yourself and let us know how you got it to become edible! Needless to say, if soldiers ate these, they must be effective for both storage and keeping your stomach full!

What Is The Best State For Homesteading