No Result
View All Result

Growing Food: What to Use Instead of Soil

We appreciate you sharing our posts with fellow patriots!
244
SHARES
ShareTweet 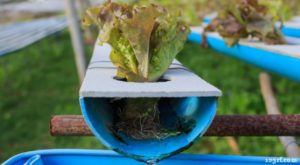 Not everybody has a ton of space to grow food, and even for those who do, there are many reasons to use mediums other than soil. Not only that, it’s always a good idea to know your options.

We live in a land of what if, and our goal is to always be prepared, right? Then you need to know how to grow food in a soilless medium.

Why Use Soilless Mediums

Anybody can poke a plant in the dirt and it will grow, or so people seem to think. That couldn’t be farther from the truth. Well, OK, sometimes you may get lucky, and there are plants that are almost impossible to kill, but it you want quality plants, there are many reasons why dirt may not be your best option.

For instance, you may live in an area where the soil isn’t ideal. It may be too wet, too dry, or lack nutrients or the proper texture. Even the best soil may contain bacteria and fungi that can be harmful to your plants. You may live in a small place where you need to grow in containers and you don’t want to deal with the mess of soil.

Speaking of which, if your soil has been contaminated with certain parasites, fungi, bacteria, or viruses, you may HAVE to let the soil rest. Then what are you going to do? You’re going to have other options.

Another reason to use soilless mediums is that you can control every aspect of your plant’s growth cycle: the nutrition, the texture, and the moisture. It’s not so easy to do any of that when you’re using soil.

Discover the golden days’ practice for getting all you can eat food without buying from the supermarket!

What Soilless Growing Mediums are There?

You’re probably thinking that soilless growing means that there are no “dirty” materials. That’s not always the case. Yes, aquaponics and hydroponics are certainly options, but there are also several different organic growing materials that make great growing mediums.

For instance, sphagnum peat moss is coarse but it’s sterile and lightweight. The one problem with it is that it doesn’t hold moisture well; it’s hard to get wet to begin with.

To combat that, you can vermiculite, which is a compact form of mica, a group of silicate minerals that form in layers, and are lightweight and fairly soft. Vermiculite does a great job of holding water in the peat, but it doesn’t provide much aeration. That’s okay, though. Our next product does.

To help keep the mix from becoming clunky and dense, use perlite, which is a form of expanded volcanic rock. It’s usually white – if you’ve used commercial potting soil, you’ve probably noticed the little white beads. That’s perlite. Because it’s basically lava, it’s light and airy and does a great job of keeping your mix aerated. Without air, your medium will literally suffocate the roots of your plant.

So, now you’ve got a sterile base, something to help the mix hold water, and something to keep it light and fluffy so the roots can grow. The only piece of the puzzle that’s missing is drainage. Course sand is great for that because it doesn’t retain water at all, but it doesn’t clump so tight that water can’t flow through it.

When making any of these mixes, you’ll probably need to add some limestone and fertilized to add the necessary nutrients.

This is likely a term that you’ve heard and is simple. It’s just a matter of growing your plants in water. You start them as seedlings and then place them in water to continue to grow. When using hydroponics, you need to add fertilizer and keep the water flowing so that it stays aerated, and keep adding it as the plants absorb it.

You’ll need something to hold the roots, too. You can use stones, marbles, sand, or any number of synthetic mediums. The traits that you’re looking for is that it doesn’t hold water, the matter has holes that the roots can grow through, and that it’s not something that’s going to degrade in the water.

Hydroponics is a great method to use as long as you have electric of some sort to run the pump. It’s a sterile system that allows you to add exactly the nutrients that you need for each plant in the system to grow.

Aquaponics is an interesting system to many people who are trying to become more independent because you can scale the system up and integrate larger aquatic creatures, and grow more plants. Of course, you’re going to need more space, but it’s a system that works. Fish waste is nutrient-dense, and the plants keep oxygen in the water. It’s a win/win.

Cost is a big difference in aquaponics and hydroponics, especially when it comes to the fertilizer. Fish food is dirt cheap; commercial fertilizers aren’t. Also, you have the whole chemical vs. organic debate, too. You can, of course, use organic fertilizer in hydroponics, but most people don’t.

Plants are irrigated (fertilize and irrigate) differently, too. Hydroponic systems typically flush the water through every 4-6 hours. In an aquaponics system, it’s flooded for 15 minutes every 45 minutes.

As you can see, there are several different soilless mediums that you can use to grow plants. Not only is dirt not required to grow plants, it’s not even the best way in many circumstances.

As a matter of fact, if you’re shooting for food independence, you may want to consider other options, especially aquaponics, because it allows you to grow an ecosystem that is easy to maintain and provides both protein (fish) and the vitamins and minerals that you need from plants.

Find the joy in being able to take care of yourself, even if it’s in small ways.

We appreciate you sharing our posts with fellow patriots!
244
SHARES
ShareTweet

Astounding Survival Use For Mud You've Never Thought Of

How Your Blood Pressure Actually Works

Now try ‘low blood pressure’. The day I googled these, the number was 25,000,000 hits less. This difference reflects the attention most of society pays to high blood pressure, leading to hypertension. While the danger of hypertension can’t be...

Coronavirus: What You Should Really Do Regarding Your Stockpile

For most, fear is a part of that reaction. That’s normal, as we all tend to be afraid of the unknown and there’s still a lot of unknown about this virus. But the truly scary part isn’t the fear...

10 Proven Tips For A Long-Distance Bug-Out

Even if you manage to escape and take on the road, things will not be as easy as most folks assume. For some, there may be a long-distance bug-out journey awaiting, and there are many considerations they need to...

This article will discuss the principle optic technology available to survivalists and their applications. Monocular & Mini-Binoculars A small, light monocular enables me to identify hikers and backpackers out on the trail, telling me whether they are members of...

No Result
View All Result