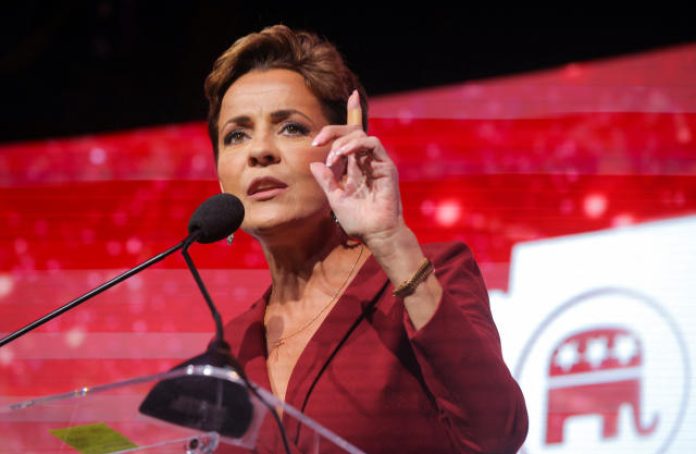 Arizona Governor’s candidate Kari Lake is pointing to an explosive letter from the Office of the Attorney General to the Maricopa County Attorney’s Office as further evidence that she “will become governor.”

Lake told The Daily Mail on Saturday that she still believes she will become governor of Arizona.

“The way they run elections in Maricopa County is worse than in banana republics around this world,” she said in an exclusive interview, referring to Maricopa County.

“And I’ll tell you what, I believe at the end of the day that this will be turned around and I don’t know what the solution will be but I still believe I will become governor, and we are going to restore honesty to our elections,” she added.

In another interview, Lake touted her legal team and said what happened in the Arizona election is “unforgiveable.”

“Rest assured I have assembled the best and brightest legal team, and we are exploring every avenue to correct the many wrongs that have been done this past week,” Lake said in a video Thursday. “I’m doing everything in my power to right these wrongs.”

“What happened to Arizonans on Election Day is unforgivable,” she said.

According to Maricopa County election officials, at least 60 voting locations experienced issues with their ballot-on-demand printers.

Attorney General of Arizona Mark Brnovich pointed out the “myriad problems” in the Maricopa County election. The issues, which “go beyond pure speculation,” according to the office, are detailed below.

The Attorney General office’s letter details the numerous infractions of election integrity law that transpired in the tumultuous and poorly run election in Maricopa County. The letter can be perused below:

The Elections Integrity Unit (“Unit”) of the Arizona Attorney General’s Office (“AGO”) has received hundreds of complaints since Election Day pertaining to issues related to the administration of the 2022 General Election in Maricopa County. These complaints go beyond pure speculation, but include first-hand witness accounts that raise concerns regarding Maricopa’s lawful compliance with Arizona election law. Furthermore, statements made by both Chairman Gates and Recorder Richer, along with information Maricopa County released through official modes of communication appear to confirm potential statutory violations of title 16.

Pursuant to the AGO’s authority under A.R.S. § 16-1021, the Unit hereby requests Maricopa formally respond to and address the following concerns that have been raised.

According to Maricopa County, at least 60 voting locations had issues related to some ballot-on-demand (BOD) printers having printer configuration settings that were non-uniform, which appeared to have resulted in ballots that were unable to be read by on-site ballot tabulators. Based on sworn complaints submitted by election workers employed by Maricopa County, the BOD printers were tested on Monday, November 7 without any apparent problems. Many of those election workers report that despite the successful testing the night before, the tabulators began experiencing problems reading ballots printed by the BOD printers within the first thirty minutes of voting on Tuesday, November 8, 2022.

Following widespread reports of problems at voting locations on Election Day, Chairman Gates publicly stated that voters who had already checked in to e-Pollbook, but were having difficulties voting could “check out” of that voting location, and would be able to nonetheless vote in another voting location. Based on sworn complaints received by the Unit, not only have poll workers reported that they were not trained and/or not provided with information on how to execute “check out” procedures, but many voters have reported the second voting location required the voter to cast a provisional ballot as the e-Pollbooks maintained the voter had cast a ballot in the original voting location. In fact, Arizona law specifically prohibits provisional ballots to be counted when a voter has signed multiple pollbooks. See A.R.S. 16-584(D) (If the voter’s name is not signed on the roster and if there is no indication that the voter voted an early ballot, the provisional ballot envelope shall be opened and the ballot shall be counted. If there is information2

Many media outlets have disputed that number, and some have suggested upwards to 50% of voting locations experienced one or more difficulties with issues associated with the BOD printers. See, e.g.,
https://twitter.com/Rasmussen_Poll/status/1593368258115211264?s=20&t=rVcK7487_wL6FA YuUphxfA. Notably, it has also been reported that the BOD printers were discontinued by the manufacturer prior to the 2022 General Election, but were nonetheless used. See https://www.washingtonpost.com/politics/2022/11/10/kari-lake-arizona-maricopa-county/showing the person did vote, the provisional ballot shall remain unopened and shall not be counted.) (emphasis added).

Please provide a detailed report indicating: (1) when and how poll workers were trained and/or provided with procedures on how to “check out” voters from one voting location so they could lawfully vote in another location; (2) the legal basis for the “check out” procedures in light of A.R.S. § 16-584(D); (3) why Maricopa continued to publicly encourage voters to leave a voting location after having been notified by the Unit that poll workers appeared to be improperly trained on “check out” procedures;3 and (4) a report detailing all voters who were provided a provisional ballot due to having already signed an e-pollbook at another Election Day voting location and the final disposition of their provisional ballot.

Due to the widespread problems in non-uniform printer configuration settings, many voters were unable to tabulate their ballots on Election Day using on-site tabulators. Instead, voters were instructed to deposit their ballot in “Door 3.” According to statements by Chairman Gates, Recorder Richer, and Maricopa County official communications, “Door 3” ballots were transported to Maricopa County Tabulation and Center to be tabulated by the HiPro 821 or Cannon G1130 tabulators at central count.

Please provide a copy of each voting location’s Official Ballot Report, including any discrepancies in the report and explanations for any such discrepancies. Please also provide a written statement clarifying the “reconciliation” that appears to have occurred at central count on or around November 16, 2022. Finally, please provide a written report regarding how many ballots were commingled, how many ballots were placed inside the black duffle bags intended for tabulated ballots, how and when Maricopa became aware of the related problems, and how these problems were ultimately resolved.

Arizonans deserve a full report and accounting of the myriad problems that occurred in relation to Maricopa County’s administration of the 2022 General Election. As the canvass is looming, and these issues relate to Maricopa County’s ability to lawfully certify election results – the Unit requests a response to the aforementioned issues on or before Maricopa County submits its official canvass to the Secretary of State, which must occur on or before November 28, 2022. See A.R.S. § 16-642(A).

The Letter to the Maricopa County Attorney’s Office was signed by the Assistant Attorney General Jennifer Wright and was dated November 19, 2022.

Source
Explosive Letter from Arizona AG to Maricopa County is Held Up by Kari Lake as Evidence She ‘Will Become Governor’ is written by Kyle Becker for trendingpolitics.com

Trump says he is in touch with North Korea’s Kim

How To Purify Water Using Chlorine

Harvesting Rainwater As A Prepper