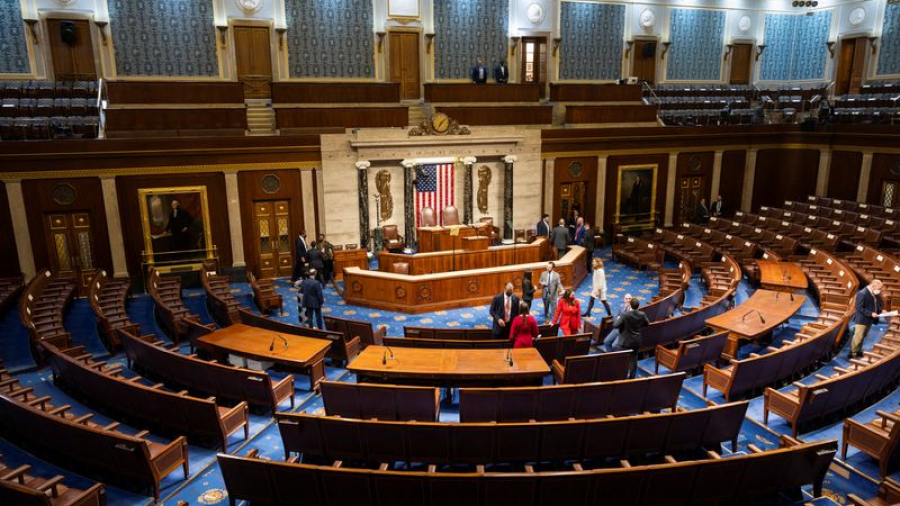 Control of the U.S. Congress is at stake in this November’s midterm elections, along with Joe Biden’s remaining policy agenda.

Republicans stand a strong chance of taking control of the U.S. House of Representatives, while Democrats have better odds of retaining a majority in the Senate. A Republican House would be enough to derail most legislation Biden and his fellow Democrats want to enact, as well as likely spurring a wave of new congressional probes of the administration.

The party in power typically loses House seats during the first term of a new president.

Democratic President Barack Obama’s party lost a devastating 63 seats in the 2010 election during his first term. In 2018, two years into Donald Trump’s presidency, the Republican Party gave up 41 House seats. In both cases, control of the chamber flipped.

This year, Republicans need only to gain five seats to assume the majority in the 435-member chamber.

Their prospects of winning those seats have been enhanced by the practice of gerrymandering, the once-in-a-decade drawing of congressional districts by state legislatures. Republicans control the vast majority of U.S. statehouses and have used that power to fashion districts that favor their own candidates and ensure fewer competitive races.

Democrats had hoped their own aggressive map in New York would offset Republican gains in states such as Texas and Florida. But a recent court ruling invalidated the New York congressional map, strengthening the Republican gerrymandering advantage.

SOME DEMOCRATS HEAD FOR THE DOOR

House Democrats fearing a Republican takeover have sprinted for the exits. So far, 30 House Democrats have announced they are retiring or seeking other office, the most for the party since 1992.

Republicans need to gain only one seat to take control of the U.S. Senate, which is currently divided 50-50 with Vice President Kamala Harris as the tie-breaking vote.

But battle-tested Democratic incumbents in Arizona, Georgia and Nevada may help the party hold onto those seats, while Republicans could surrender seats in Pennsylvania and Wisconsin, two states that voted for Biden over Trump in the 2020 election.

A so-called Republican wave could result in all those seats going that party’s way, along perhaps with New Hampshire, which would give it a 54-49 majority.

While Biden is not on the November ballot, midterms frequently serve as a referendum on the president. Unfortunately for Democrats, Biden at the moment is struggling.

More than half of the country – 53% – disapproves of his performance, according to a Reuters/Ipsos poll conducted April 25-26. Sixty-one percent of those surveyed said the country is headed in the wrong direction, including 40% of Democrats and 54% of voters who call themselves independent.

Other opinion polls, such as Gallup, show similar levels of disapproval. In fact, Biden is more unpopular than Obama was in 2010 when Democrats were swamped in the House elections.

Democratic operatives fear Biden’s unpopularity may depress turnout among their voters, while motivating Republicans to come out with more enthusiasm.

Trump also is not on the ballot. But he is backing a slate of like-minded candidates with an eye toward remaining the defacto leader of his party and another possible White House bid in 2024.

Democrats’ hopes that a swift economic recovery from the COVID-19 pandemic would boost their midterm prospects have not been realized.

Despite a sharp drop in unemployment, the economy remains plagued by rampant inflation, which has spiked the cost of household staples such as food and energy. Continued supply chain disruptions led the nation’s gross domestic product to decline slightly in the first quarter of 2022 – its worst performance in two years – although analysts say there is little chance of the country entering a recession.

In-fighting among Democratic lawmakers has frustrated attempts to deliver on Biden’s campaign promises. After passing a massive rescue package and a sweeping infrastructure bill last year, Congress remains bogged down on negotiations over further coronavirus aid as well as a potential package revolving around climate change, prescription drug reform and changes to the tax code.

As a result of gerrymandering and increased polarization of the electorate, the number of congressional districts that can be called truly competitive has shrunk dramatically.

That gives Democrats fewer opportunities to stem their losses by capturing seats elsewhere. And in several of those competitive races, retirements by Democrats have jeopardized the party’s chances of keeping the seats.

Election forecasters such as the Cook Political Report, Inside Elections and the University of Virginia Center for Politics all view Republicans as favorites to win the House, based on the political environment and factors such as geography and demographics.

David Wasserman, an election analyst with the Cook Political Report, said the likely outcome for House Democrats is somewhere between “terrible” and “horrific” – with the latter being the loss of more than 30 seats.

Source
Explainer: What’s at stake in the 2022 U.S. congressional elections is written by Wolf Daily for wolfdaily.com