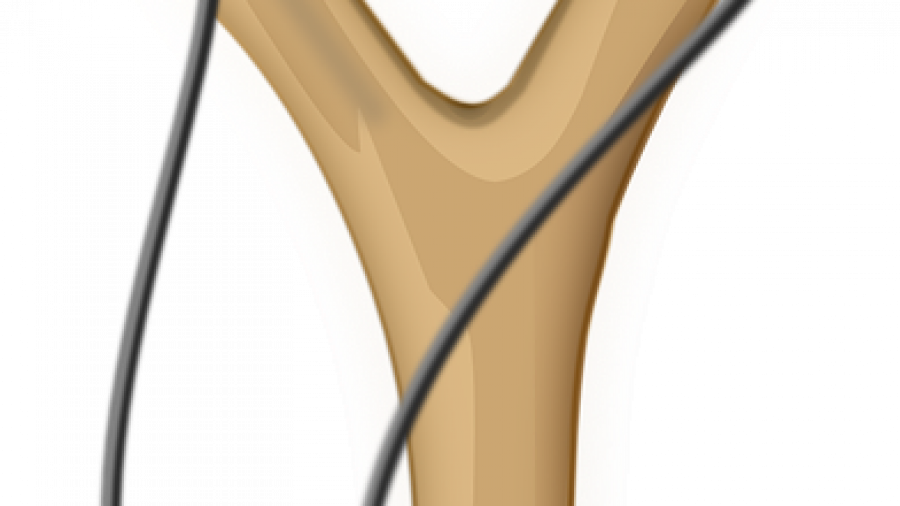 When I say “primitive weapon” most people know what I’m talking about. They typically think of things like a bludgeon, a club, or some other large heavy object. They may also think of certain Native American weapons (like the ones we talk about in our blog here).

However, I’m going to talk about one primitive weapon today that doesn’t get as much publicity. Probably because most people figure it’s just for little kids to use as a toy. But I swear to you this primitive weapon can and will save your life in an emergency. Not to mention you can easily fashion it from scratch in a bug out situation.

You’ll be even smarter and wiser once you’ve read this article. Like I always say, Prepare Now, Survive Later!

Score An Easy Meal With This Primitive Weapon

Alright, I’ll spoil the surprise…the primitive weapon I’ve been referring to this entire time is a slingshot.

This survival tool is a must-have in a survival situation. Not only is it easy to make, but it’s also simple to use after just a few minutes of practice. Plus, you can make the main components out of natural materials. You need only purchase a couple small things to make this weapon a success.

Using a slingshot, you can take down birds, rabbits, squirrels, and other small game with ease. This is perfect for helping ensure you get enough to eat throughout the day!

Despite this, I  bet you have no idea just how easy to use (or just how valuable) a slingshot can be in an SHTF event.

Now let’s talk about how you can make one of these on your own.

How To Make Your Own Slingshot

Now keep in mind it’s incredibly hard to find a natural material that has the durability and give like an elastic band does. Very few materials naturally snap back over and over again while keeping their shape. That’s why it’s important to store a couple materials in your bug out bag for just such an occasion.

Luckily, you can prepare in advance by buying a couple elements for this primitive weapon in advance. This may not seem as “rugged” or “authentic,” but trust me – the parts you buy will serve you well. In fact, these store-bought items will often work even better than what you can find in nature.

Also, keep in mind you CAN use rocks instead of metal balls in a survival situation. This isn’t as efficient, since the shape and size of the rock can dramatically affect your performance. Because of this, you may have to do some extra practicing to hone your skills. However, using rocks is definitely an option if you need it.

Now that you know how to make your own slingshot, I want to introduce you to a few more helpful informational videos and tips that will help you thrive with this primitive weapon. Here’s some great ones from Survival Life:

When it comes to using a slingshot for survival (and honing any primitive skills really), practice makes perfect and patience breeds perfection.

After you choose your slingshot (either homemade or store bought) the next key point is choosing the right ammo and practicing your aim.

Testing out any new skill can be incredibly frustrating but you’ve got to stick with it.  In the text below we’ve given you the step by step guidelines that should get you started with your new skill.  Check it out and if you have any tips or tricks to add, be sure to leave them in the comments at the bottom of the page!

The type of ammo you use has a heavy impact on your accuracy and exactly how lethal your shot will be.  Ideally, you’d want to use a uniform ammo (like ball bearings) so that you get an accurate shot every single time.  However, in a SHTF scenario access to ball bearings will be limited so I’d always recommend practicing with rocks.  Remember, practice makes perfect!

Load your slingshot with your selected ammo. Using your dominant hand, hold the base of the slingshot. Your ammo should be placed exactly in the middle of the pouch without shifting. The positioning of your ammo is important as it would tell how it would be projected when fired.

3. Keeping Your Ammo In Place

With the use of your thumb and index finger, hold the ammo and stretch out the rubber of your slingshot. Make sure to have your thumb parallel with the strap. Avoid having the pocket or pouch get squeezed too tight as this could hinder the release of the ammo.

Have your arm raised on the side while holding the slingshot. You can choose to point the fork upward or angle to the side, both positions will work fine. In the end, it will all fall down with the type of shot you’re taking.

Aim slightly above your target, make sure nothing will block the path, and release of your ammo. Practice using both eyes when aiming as it is better compared to using just your dominant eye. Pull the band until it’s stretched out forming a triangle.

7. Releasing The Band To Fire

Before releasing, make sure you have a clean shot and no obstruction are ahead aside from your target. Consider as well the length of your band determines the distance to your target. The shorter the band the shorter its range is. When everything is clear, release your grip from the ammo.

Learn another useful primitive skill outdoors by watching this video:

Learning how to use a slingshot is one of the most useful primitive skills you could acquire. However, while it’s really fun to use, a slingshot can also be dangerous and cause unintended harm to others. For that reason, you should be careful and responsible on how you use it. If you’re a newbie on slingshots, don’t worry because your accuracy and precision can increase through practice.

Using A Slingshot For Self-Defense

Remember when I said a slingshot wasn’t just a toy meant for children? Well, they’ll do some serious damage to an attacker if you need to use it for self-defense. Make no mistake, the right ammo with enough power behind it can easily take down an attacker just as much as a squirrel or rabbit.

Take a look at this video to see an example of some of the best ammo you can use for self-defense: