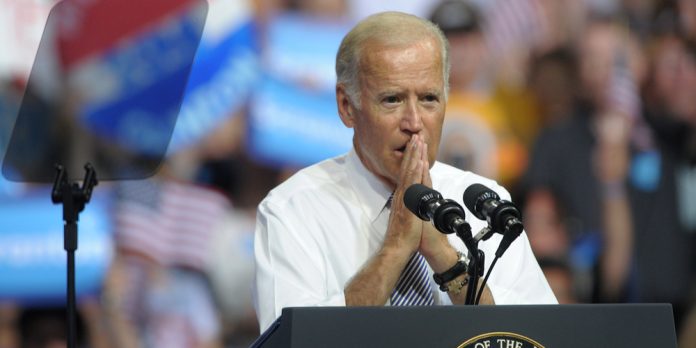 President Biden’s approval rating in the RealClearPolitics average fell to an all-time low on Wednesday, falling below 38 percent for the first time in his tenure as president.

Five days after the Supreme Court’s decision to overturn Roe v. Wade, which Democrats had hoped would spark a surge in Democratic support, Biden’s support fell to its lowest level ever.

Another day, another fresh all-time low for Biden job approval on RCP, under 38 for the first time. pic.twitter.com/EIJMMNucHb

In a last-ditch effort to increase his waning support, Biden launched another exaggerated, hyperbolic attack on conservatives.

Following the SCOTUS decision, Sonia Ossorio, the president of the National Organization for Women in New York, exhaled, “I don’t see how this cannot energize voters. Women are tired of it.

Elect more MAGA Republicans if you want nationwide restrictions on abortion, the imprisonment of women and doctors, and no exceptions for rape or incest, yelled Senate Majority Leader Chuck Schumer (D-NY). To preserve Roe, elect more Democrats who support abortion.

“Ultra-MAGA” has grown to be a favorite phrase for Biden. Early in May, Biden complained about the ultra-MAGA agenda while delivering a speech on the economy. Like most MAGA things, it’s extreme.

Folks, let's get one thing straight: The ultra-MAGA agenda has always been about taking away women’s rights, in every single state.

In an effort to overcome the president’s dismal approval ratings and voters’ annoyance with high inflation, the White House works assiduously to portray Republicans and their policies as having a “ultra MAGA agenda,” according to USA Today.

When asked how Biden’s attacks on “Ultra-MAGA” Republicans would “jive” with his promise to bring unity, former White House press secretary Jen Psaki responded, “The President’s view is you can do both. He thinks we can still accomplish things together. Additionally, he will not remain silent about what he perceives to be “Ultra-MAGA” behavior and “Ultra-MAGA” policies that are against the grain of the nation and are not in the best interests of the people.

Psaki stated, “It’s the president’s phrase and, as you know, the president made those remarks just last week. “I think what has struck him is how extreme some of the policies and proposals are that a certain wing of the Republican Party is for,” In his opinion, adding a little “Ultra” made it pop a little more.

The team — specifically the Biden team — wants it to be a choice between Biden and Trump, she continued. But everyone has to deal with inflation on a daily basis. A vote on the president is being held. The midterm elections are about that.

How To Build A Survival Greenhouse

6 Sneaky Places To Hide Your Cash