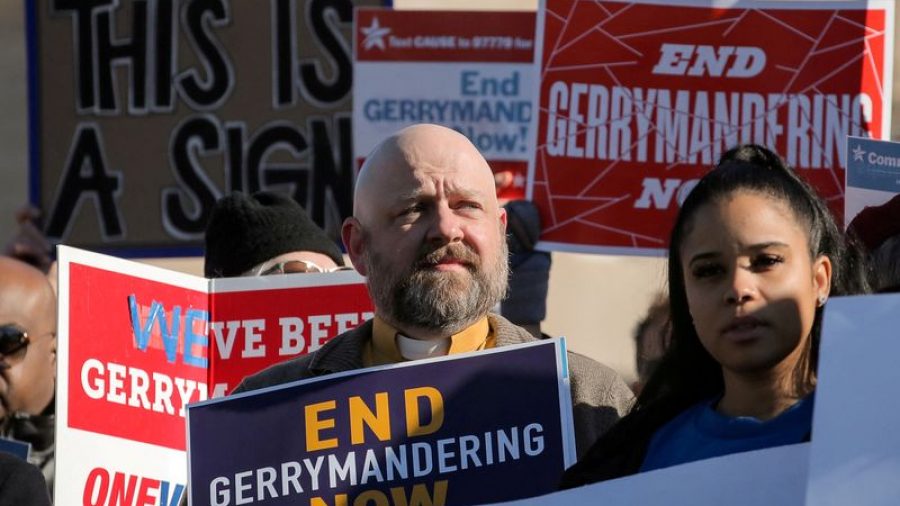 A string of decisions throwing out Republican-drawn congressional maps in Ohio, North Carolina and Pennsylvania has intensified the party’s determination to install justices who could give lawmakers fresh opportunities to muscle through more advantageous maps.

“The stakes in this election are going to be as high as the Senate race,” said Robert Paduchik, the Republican chair of Ohio, where an open U.S. Senate seat is up for grabs.

There are nearly 90 state supreme court seats on the ballot nationally this year, according to the elections website Ballotpedia, and control of the top courts in Ohio, North Carolina, Michigan and Illinois are all in play.

The Republican State Leadership Committee (RSLC), which supports down-ballot statewide candidates, plans to pour more than $5 million into the most high-profile contests. That would be a record for the group, which is one of dozens of organizations and political action committees likely to spend money on the races.

“We know that controlling state legislatures alone is no longer enough to stop liberal gerrymandering,” Romeo said, referring to Democrats’ strategy as “Sue Until it’s Blue.”

NDRC and other Democratic-aligned groups are marshaling their own resources, saying Republicans will otherwise have free rein to manipulate district lines to entrench power in Congress and in state legislatures.

Kelly Burton, NDRC’s president, said justices from both parties have reprimanded Republicans “for gerrymandering maps so egregiously as to prevent free and fair elections.”

Democrats face long odds in November’s elections to maintain their fragile majority in the U.S. House of Representatives.

State supreme courts played a significant role during the 2020 election and its aftermath, issuing rulings on everything from mail-in ballots to former President Donald Trump’s false claims of voter fraud.

State supreme court races saw nearly $100 million in spending between 2019 and 2020, by far a new record, according to a report from New York University’s Brennan Center for Justice. That total included some $35 million from outside interest groups.

The report’s author, Douglas Keith, said he expects even higher spending this year given the courts’ importance for partisan agendas.

“It is absolutely on stakeholders’ minds that these courts are positioned to play a significant role in the 2024 election,” he said.

OHIO COURT ‘HANGS IN THE BALANCE’

In Ohio, three Republican seats on the seven-judge court are on the ballot this year.

The state party cut an ad criticizing Democratic Justice Jennifer Brunner, who is running for chief justice, for a 2020 fundraiser headlined by Holder, whose group has filed lawsuits challenging Ohio’s congressional maps.

The court is split 4-3 in favor of Republicans. But Chief Justice Maureen O’Connor, a Republican retiring at year’s end, sided with the Democratic minority in throwing out a Republican-backed congressional map in January – drawing threats of impeachment from some Republican lawmakers.

Republicans sidestepped the decision by adopting a second map that appears likely to remain in place for November’s elections while the litigation is pending. Installing a new chief justice could give Republicans a more receptive court ahead of the 2024 election cycle.

This fall marks the first time that the ballot will list party affiliations for state supreme court hopefuls. The change, approved by the Republican-majority legislature, is expected to benefit the party’s candidates given Ohio’s Republican lean.

The state Chamber of Commerce, which has endorsed the three Republican candidates, plans to spend $4 million this fall, said President Steve Stivers, a former congressman.

“The court hangs in the balance,” he said. “You can have a pro-business governor, a pro-business legislature, and if you have the wrong four people on the Supreme Court, you can go backward every day.”

In North Carolina, the Democrats’ 4-3 edge is at stake, with two Democratic seats up for election in November.

The RSLC released an advertisement in January accusing Democratic incumbent Sam Ervin of a conflict of interest in hearing redistricting litigation while also running for re-election.

Bobbie Richardson, the state Democratic Party chair, said Republicans have made “our judicial branch more and more partisan.” Democrats will be “investing heavily” to preserve a balanced court system, she said.

The Republican state party did not respond to a request for comment.

In Pennsylvania, Republicans were frustrated that the state’s Democratic-controlled top court approved a map earlier this year backed by Holder’s group over one favored by Republican lawmakers.

Russ Diamond, a legislator running for lieutenant governor, is leading the effort. He said the current system creates a “natural gerrymander” favoring the largest counties.