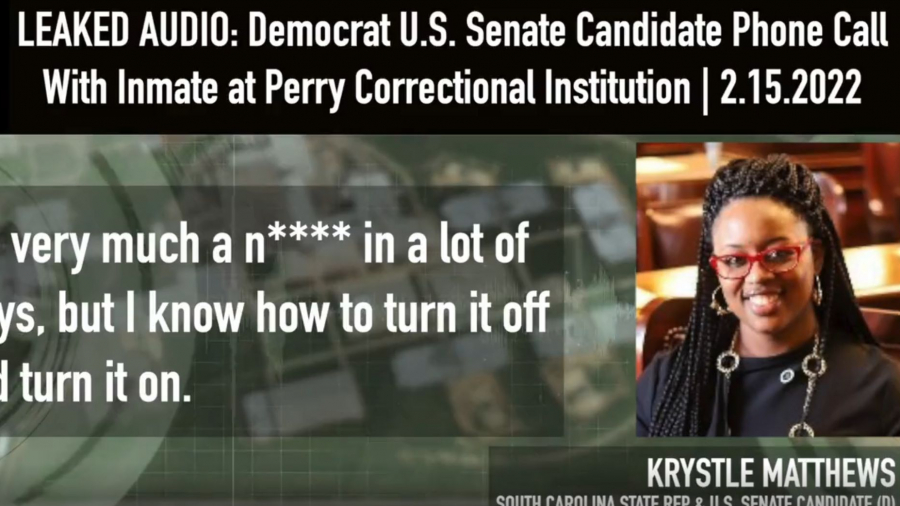 A Democratic Senate candidate in the state of South Carolina appears to have been caught on audio calling a prison inmate and offering him to become a “sleeper” Republican candidate to help Democrats win local elections. Listen:

“We need some secret sleepers,” Krystle Matthews, a South Carolina state Rep., said on the audio obtained by Project Veritas. “Like we need, we need them to run as the other side, even though they for our side… and we need them to win.”

“We need people to run as Republicans in these local elections,” Matthews went on. “This is the only way you’re gonna change the dynamics in South Carolina… We can battle ’em in public all day. As long as we know, we working for the same goal… for me, I feel like y’all, we need sleepers.”

“When we get enough of us in there, we can wreak havoc for real from the inside out,” Matthews added. “Then we can push some sh*t from the inside out… We gotta take back some of these seats, especially in these local elections… we need a group of sleepers.”

“And I still gotta struggle to raise money for my campaign? Where the f*ck is my black people with money?” she added. “I don’t care about no dope money! Give me that dope boy money! Where the f*cking dope, where the duffle bag boys? Get you fighting with somebody in your family that don’t even know you donating to my campaign and put that sh*t under they names.”

“We need some folks that can wear all black at night and take they yard signs down when they, when they sleeping,” Matthews went on. “We ain’t gotta make a bunch of noise about it. We ain’t gotta, we ain’t gotta go lie about it. Just don’t say sh**.”

“Just like when somebody drop money and you pick it up,” she added. “You pick that sh** up and you keep walking.”

But many Americans are left to wonder: Is this just the tip of the iceberg?

Source
Dem. Senate Candidate Busted on Call with Prison Inmate on Rigging Elections is written by Kyle Becker for trendingpolitics.com