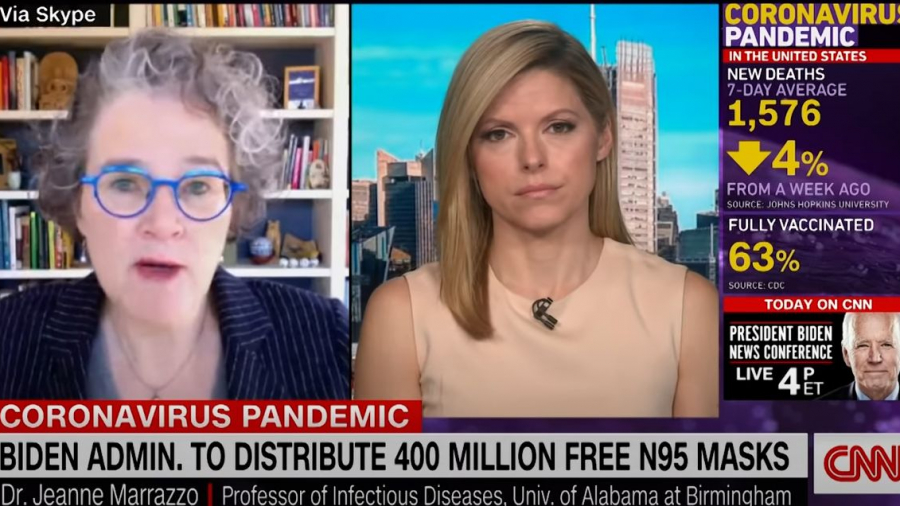 After two years of a Covid pandemic, the Centers for Disease Control shocked the world on Wednesday by finally admitting that natural immunity from prior infection exists.

But it’s even worse than that for the mainstream Covid narrative: The CDC admits that natural immunity from prior infections is superior to vaccinated immunity alone.

Don’t tell that to CNN’s “news” team, however, which mangled reporting on the CDC bombshell in a vain effort to keep the facts from its viewers. Watch:

“You know, it’s very interesting,” CNN Medical Correspondent Elizabeth Cohen said before lying through her teeth. “The CDC showed once again that vaccination is superior to prior infection.”

Of course, CNN would do its utmost to conceal the actual news from its few remaining viewers, as well as those who read the news source’s website.

The CDC report was absolutely clear: Vaccination was “safest” — but only if you didn’t have a prior infection. Natural immunity was the most important indicator of positive health outcomes, whether vaccinated or unvaccinated.

Once an individual had natural immunity, it substantially lowered risk of hospitalization and death regardless of vaccination status. The CDC, correctly, pointed out that doesn’t make it a wise “strategy” to seek out Covid infection.

But CNN is intentionally obfuscating the facts in the CDC study in order to mislead its viewers into getting vaccinated regardless of the risks and benefits.

CNN “reported” on the news earlier on Wednesday, and its first headline was blatantly wrong. It reported the reverse of what the CDC said. 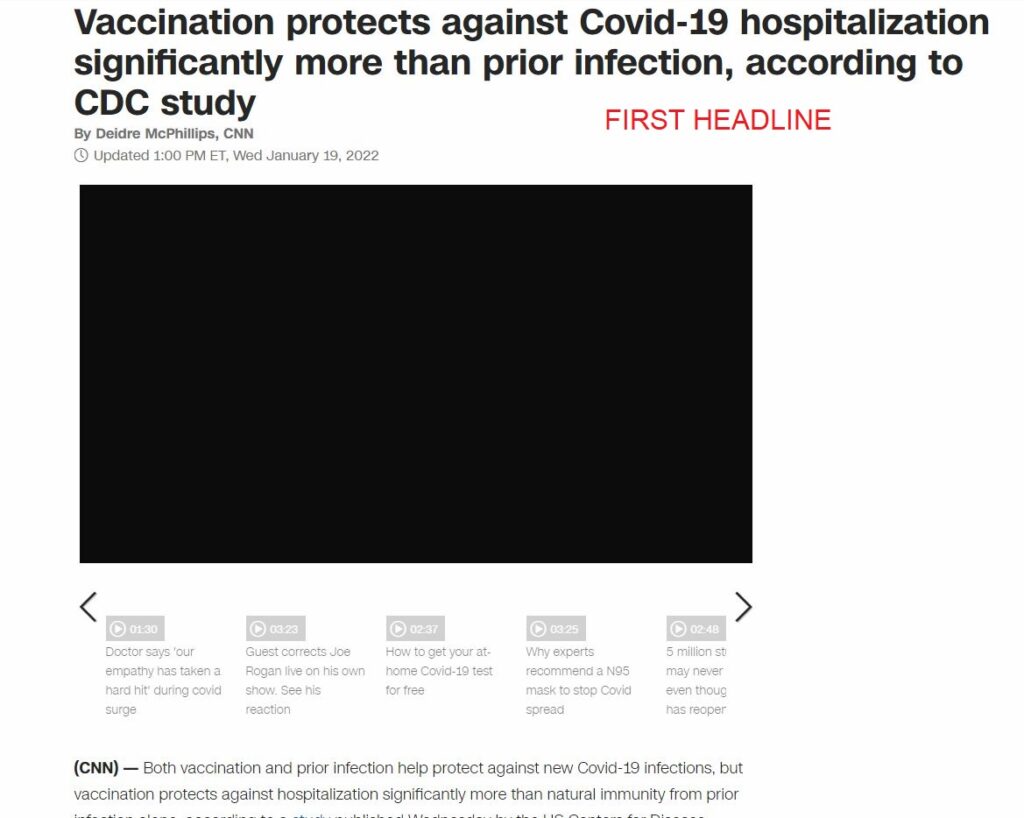 CNN then “stealth edited” the story with a new headline… which was still wildly misleading, as we will see with a brief review of the CDC report further below. 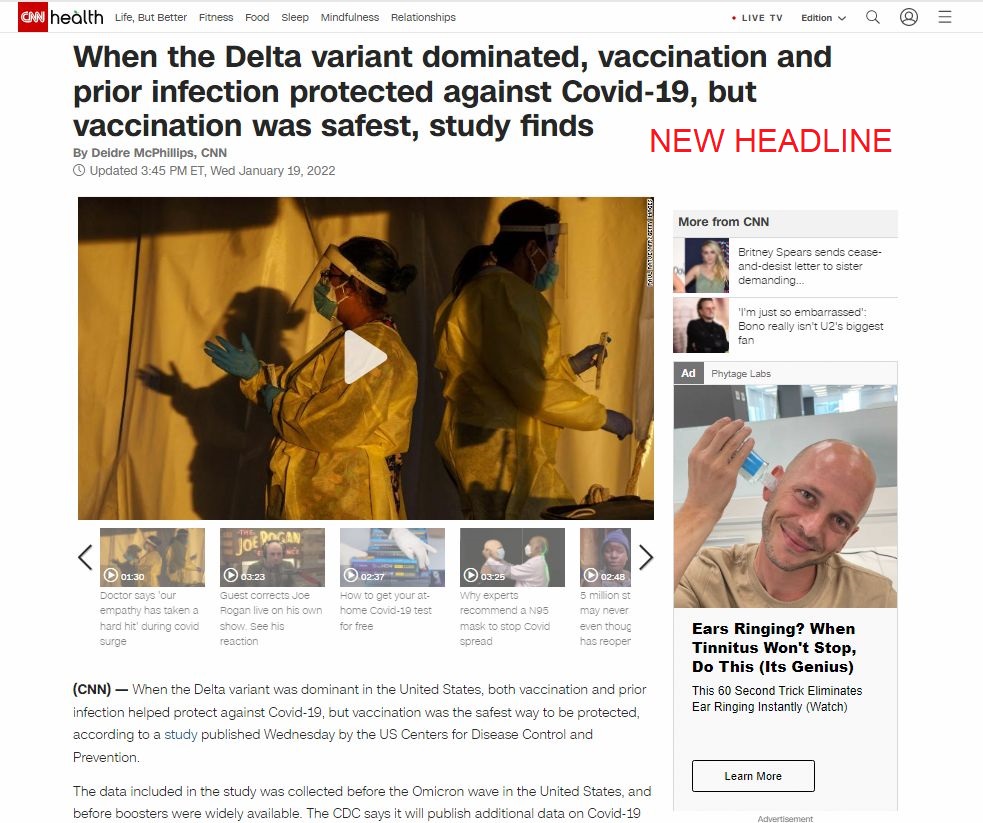 Compare the findings as were correctly reported by Agence France-Presse. “Natural immunity more potent than vaccines during US Delta Wave: study,” the headline plainly reads. 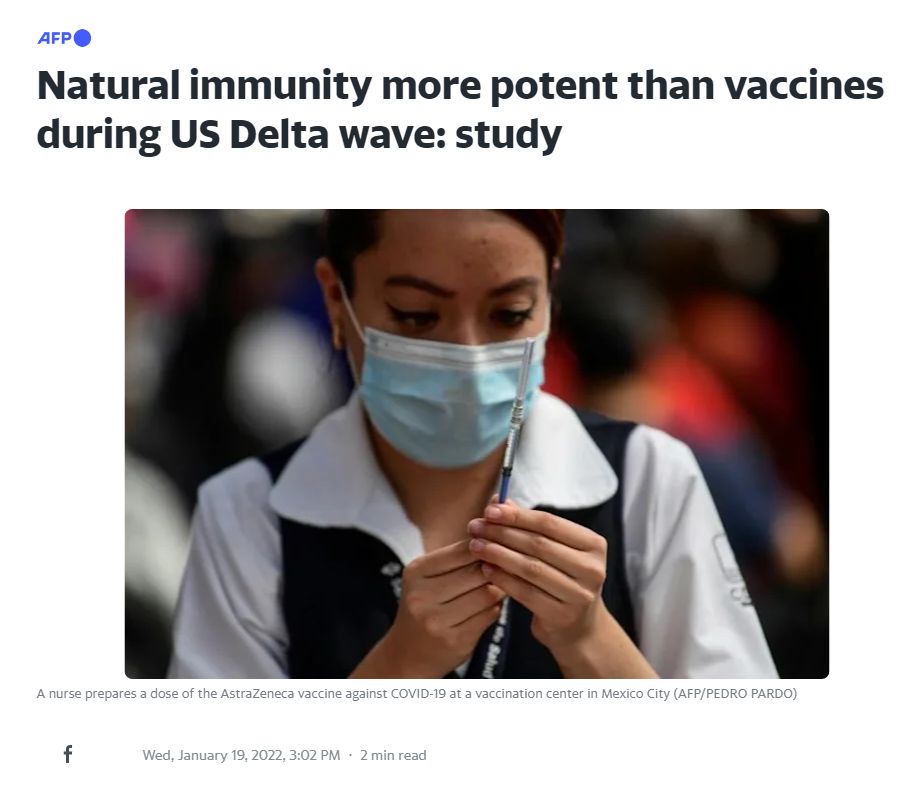 “During America’s last surge of the coronavirus driven by the Delta variant, people who were unvaccinated but survived Covid were better protected than those who were vaccinated and not previously infected,” AFP noted about the new study.

“The finding is the latest to weigh in on a debate on the relative strengths of natural versus vaccine-acquired immunity against SARS-CoV-2, but comes this time with the imprimatur of the US Centers for Disease Control and Prevention (CDC),” AFP added.

The study itself is heavily parsed and argues that vaccination is still the best strategy to prevent Covid hospitalizations and deaths. That may be true — but only for people who don’t have natural immunity from prior infections.

The CDC unsurprisingly urged all Americans to get vaccinated, regardless of prior infections. This is consistent with the agency’s earlier positions.

Although the epidemiology of COVID-19 might change as new variants emerge, vaccination remains the safest strategy for averting future SARS-CoV-2 infections, hospitalizations, long-term sequelae, and death. Primary vaccination, additional doses, and booster doses are recommended for all eligible persons. Additional future recommendations for vaccine doses might be warranted as the virus and immunity levels change.

But if you dig further into the release, you get a clearer picture of how vaccinated immunity and natural immunity stack up.

Across the entire study period, persons with vaccine- and infection-derived immunity had much lower rates of hospitalization compared with those in unvaccinated persons. These results suggest that vaccination protects against COVID-19 and related hospitalization and that surviving a previous infection protects against a reinfection. Importantly, infection-derived protection was greater after the highly transmissible Delta variant became predominant, coinciding with early declining of vaccine-induced immunity in many persons (5). Similar data accounting for booster doses and as new variants, including Omicron, circulate will need to be assessed.

One might argue that natural immunity from prior infection is actually doing a lot of the heavy lifting among the vaccinated population, as will be seen below.

The CDC’s press release refers specifically to California and New York. But it’s another case — Rhode Island — that provides one of the best illustrations of how the data break down.

Dr. Andrew Bostom, an epidemiologist, delved into the data and provided the statistical breakdown that helps us fully understand what is going on: 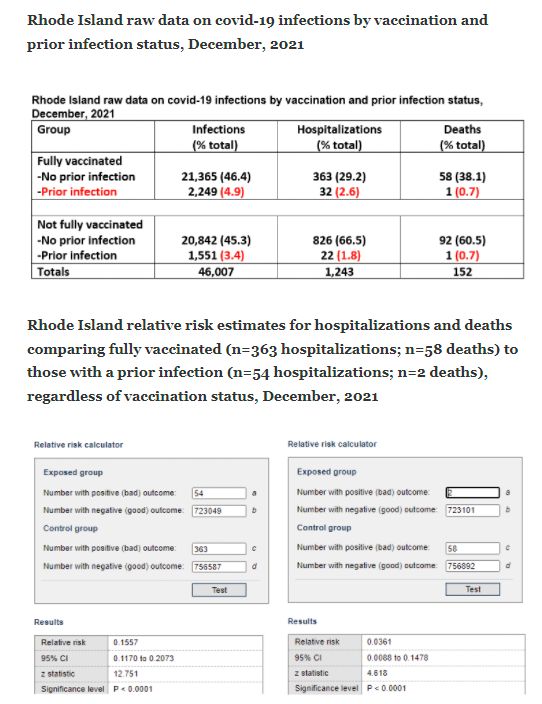 If you take these base numbers, which come from the Rhode Island Department of Health’s website, you come to some startling conclusions. After verifying the data and the epidemiologist’s methodology (Dr. Bostom changes some of the Rhode Island Health Department’s terms and does some simple math before running the statistics), you can see that cases, hospitalizations, and deaths are all greatly reduced by natural immunity.

The strongest takeaway is regarding deaths. Even when correcting for scale, survival of a prior infection was by far the greatest predictor of surviving another Covid infection. 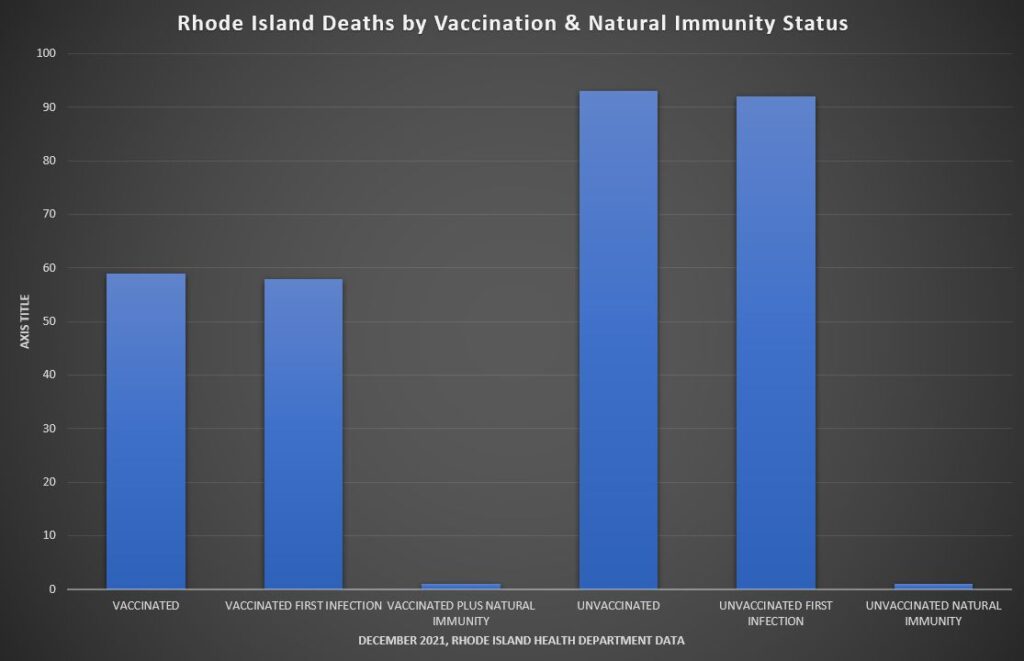 However, if one did not have a prior infection (or does not know if one had a prior infection), the argument can be made that vaccination appears to provide the best strategy of surviving one. (It is important to note that the vaccinated community in Rhode Island is much larger than the unvaccinated community; it is about twice as large, therefore the incidence rate for unvaccinated deaths is about three times as high).

Yet, even as the CDC estimated that as of September there were 146.6 million Americans with prior infections, the state-by-state breakdown, including Rhode Island, proves to be substantially higher after the Omicron surge, as Becker News had earlier predicted would be the case.

Here is New York’s, for context on the CDC’s latest press release. It is about 88 percent prior infections.

Here is California’s. About 78 percent.

Just for further context, here is Florida. About 87 percent.

For perspective, the Mayo Clinic once considered 200 million Americans with vaccinated or natural immunity to be sufficient to claim “herd immunity.” The latest Omicron numbers, based on CDC’s Covid burden estimates, lead us to assess there may be as many as 250 million Americans with prior infections. (Cases, however, may be counted more than once.)

Rhode Island’s pattern of natural immunity being the best predictor of positive health outcomes holds up when it comes to hospitalizations. 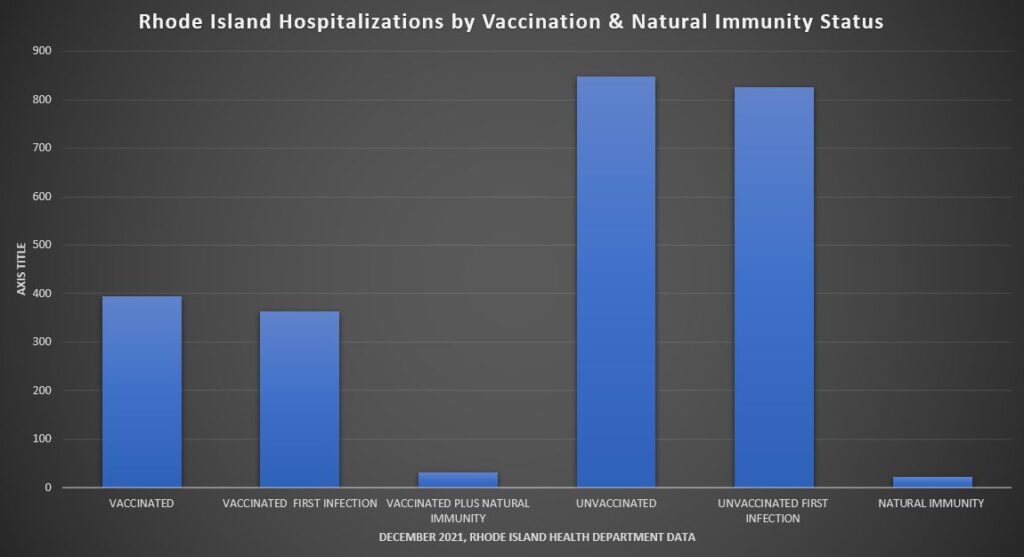 Additionally, natural immunity proved to be a far superior barrier against Covid reinfection than vaccinations alone. 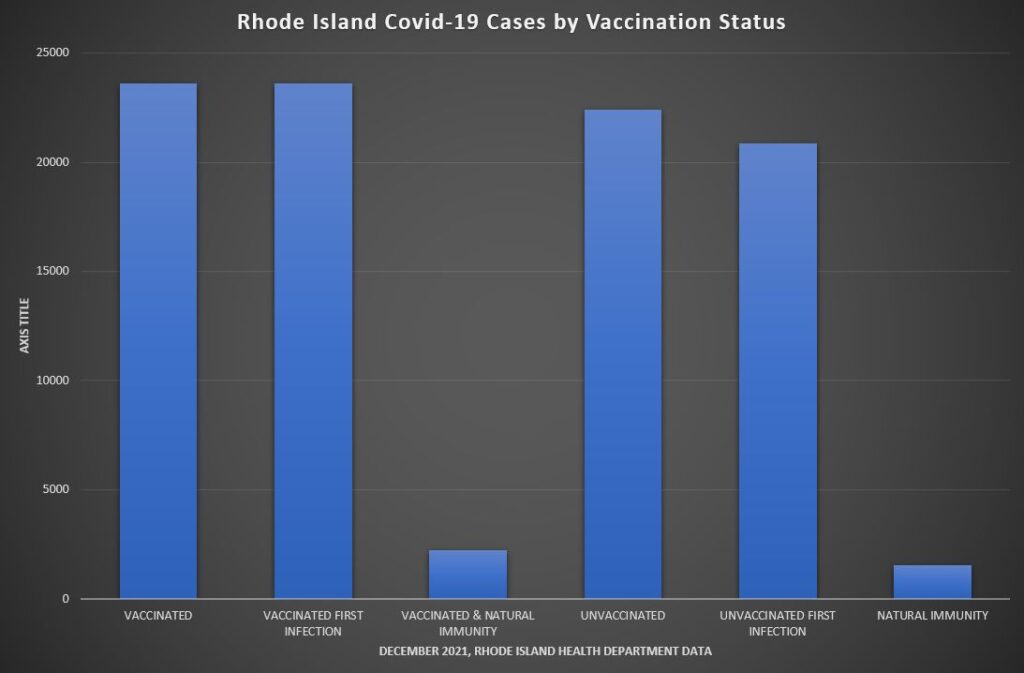 The CDC release and the state-level data both indicate that natural immunity has been a powerful defense against Covid-19. Two years into the pandemic, it has taken until now for the public health agency to admit it.

It’s even worse than that, however, as the data show. The vaccines are only of marginal utility, at best, to those who have had prior infections to SARS-CoV-2. And as recent studies show, even though the vaccines and as many as two “booster shots” fail to stop the spread and infections, Omicron appears to confer natural immunity to other variants, such as Delta.

“Previous infection with SARS-CoV-2 has shown to induce effective immunity and protection against reinfections in most individuals,” the European Journal of Immunology study said.

Nonetheless, the mainstream media have repeatedly tried to convince the American people that natural immunity is either a myth or is ineffective against Covid.

CNN’s reporting on the CDC’s report is another demonstration of journalistic malpractice, if not outright propaganda. It’s ratings demonstrate that at this point, nobody is surprised.