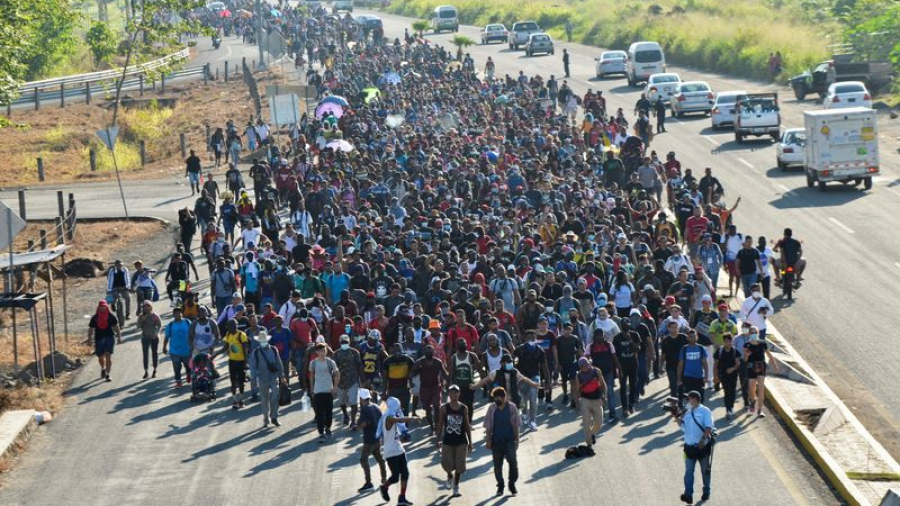 Days after Joe Biden took office in January 2021, two of his top immigration advisors outlined bold plans, including a major immigration reform bill, a 100-day deportation moratorium, and a strategy to restore protections for asylum seekers that were degraded under former President Donald Trump.

One year later, those goals remain unfulfilled after Biden officials spent much of his first year in office grappling with record-breaking border arrests, unfavorable court decisions on immigration, Republican opposition in Congress and internal divisions between liberals and moderates within his own administration.

Now, the two White House officials who touted the plans, Tyler Moran and Esther Olavarria, are preparing to leave the administration, a White House spokesperson confirmed. Both previously worked for immigration advocacy groups and underscored Biden’s move away from Trump policies.

Their departures are part of a greater exodus of senior Biden immigration staffers that suggests planned reforms could be put on hold or abandoned altogether as power tips to more security-minded White House officials. In the remaining camp is Susan Rice, director of the White House Domestic Policy Council, who has tended to push for tougher enforcement at the border.

A White House spokesperson contested reports of internal divisions, saying that “everyone in this administration from the president on down is committed to building a fair, humane and lawful immigration system and bringing it into the 21st century.”

Another chaotic year at the border could provide ammunition to Republicans, who are expected to focus on immigration, an issue that strongly animates their supporters according to Reuters/Ipsos polling, in the run-up to November congressional elections.

While several people close to Moran and Olavarria say they are leaving the White House for personal reasons, other U.S. immigration officials who spoke to Reuters have grown frustrated with Biden’s decision to retain some controversial Trump policies.

Lise Clavel, currently chief of staff at U.S. Customs and Border Protection, is expected to replace Moran, according to two people familiar with the move.

Clavel was one of the lead Biden officials tasked with addressing the sudden rise in unaccompanied children arriving at the border in March 2021, but has less of an established connection to advocacy groups than Moran or Olavarria.

Whether the White House has found Olavarria’s replacement remains unclear.

“In this first year, we have been dedicated to rebuilding an immigration system that was dismantled, virtually in its entirety, by the prior administration,” he said. “We have had to rescind cruel policies, bring offices back to life, issue new policies, and rebuild entire operations.”

Citing accomplishments away from the U.S.-Mexico border, Mayorkas touted what he called a “profound shift” in how federal immigration officers prioritize who to arrest within the interior of the United States.

“We are not targeting non-citizens who have been contributing members of our communities for years and years,” he said, adding that the focus is now on security threats and recent arrivals.

Mayorkas said he planned to issue a memorandum that would similarly reform immigration detention practices, but did not provide details or a timetable.

The homeland security secretary highlighted as an “extraordinary accomplishment” the efforts to resettle about 80,000 Afghans in the United States since the U.S. military withdrew from the country in late August.

But at the U.S. southwestern border, Biden has not been able to reverse major Trump-era policies that allow border crossers, including families and asylum seekers, to be sent back to Mexico.

Heidi Altman, policy director at the National Immigrant Justice Center, which provides legal services to refugees and asylum seekers, said that as senior Biden immigration officials leave, the White House should “bring in replacements who are committed to making good on those campaign promises that have been broken.”

Some U.S. officials viewed the Biden administration’s decision to deport thousands of asylum-seeking Haitians who set up camp under a bridge in Del Rio, Texas, in September as an embrace of Trump’s hardline approach.

About 14,000 Haitians arrived just weeks after the Biden administration had finished a chaotic evacuation from Afghanistan and close to 8,000 were expelled under the Title 42 health policy in the weeks that followed.

According to one State Department official who requested anonymity to discuss internal operations, decisions were made in part because of optics. “I think people in the White House just felt like they couldn’t afford to have another issue on which they seemed to be out of control.”

Source
Biden’s immigration goals fade after setbacks at the U.S.-Mexico border is written by Wolf Daily for wolfdaily.com