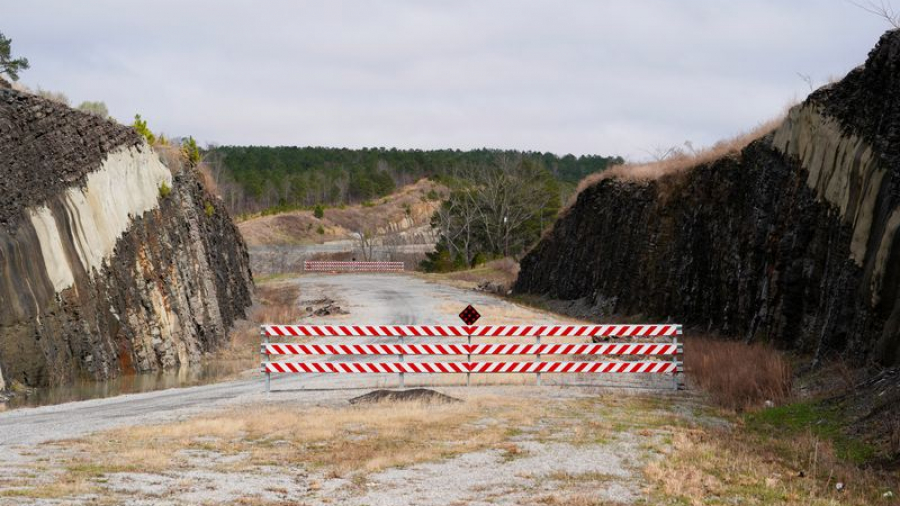 North of Birmingham, a gravel road bed slices through a series of steep ridges, part of a stalled effort to carve a 52-mile freeway around the rural fringes of Alabama’s largest city.

Construction stopped five years ago on the road, dubbed the Birmingham Northern Beltline, after federal funding ran out. Critics have labeled the project a “dinosaur,” a “zombie” and a “black hole”. Barely a mile of it has been started, and Alabama officials haven’t provided the billions it would take to finish it.

But the bulldozers could soon be moving again, thanks to U.S. taxpayers. At least $369 million in federal funding for the Beltline is headed Alabama’s way from a massive infrastructure package approved by Congress in November. That $1 trillion deal – the Infrastructure Investment and Jobs Act – allowed Joe Biden to fulfill a campaign promise to fix the nation’s crumbling bridges, roads and airports.

It’s also a big win for Alabama’s senior U.S. senator, Richard Shelby, a Republican who has worked for decades to carve out Washington dollars for the Beltline. Shelby voted “no” on Biden’s infrastructure package, arguing that it should have included military projects. The Beltline will get its funding all the same.

Other Beltline supporters portray the federal support as money still owed to Alabama from Democratic President Lyndon Johnson’s 1960s War on Poverty, which promised to help impoverished residents of the Appalachian mountains. At the southern end of that range lie the blue-collar exurbs and rural hamlets north of Birmingham.

“This is the continuation of a promise made,” said Ron Kitchens, chief executive officer of the Birmingham Business Alliance, an economic development group.

Opponents of the Beltline, meanwhile, are incensed that a gusher of cash is set to revive a dormant project that even local planning officials once ranked as a middling priority. Environmentalists say the Beltline would encourage sprawl and threaten wild areas – the antithesis of Biden’s green agenda.

“It’s a true dinosaur of a pork barrel project,” said Nelson Brooke of Black Warrior Riverkeeper, a local environmental group. “It’s a perfect example of what shouldn’t be happening with this new money.”

Biden’s administration is writing the check, but it has little control over Alabama’s project. “It is up to state departments of transportation to make decisions to move projects forward,” said Nancy Singer, a spokesperson for the Federal Highway Administration.

The Beltline isn’t the only controversial aspect of Biden’s infrastructure deal. Many Democrats groused that it favors freeways over transit, while some Republicans derided it as a wasteful grab bag of Democratic priorities.

Alabama’s phantom freeway might never have made it past the blueprint stage if not for Shelby, a Birmingham native who has served in Congress since 1979. His name adorns government facilities across Alabama, a testament to his skill at steering federal dollars to a state where household income ranks 46th of the 50 U.S. states.

Starting around the turn of the century, Shelby and other members of Alabama’s congressional delegation secured money for the Beltline through “earmarking,” a budget process that ensured the highway got dedicated funding without having to compete with other projects.

But the real breakthrough came in 2003, when Shelby got the Beltline added to the Appalachian Development Highway System, a road network aimed at reducing isolation in the mountainous region stretching from northern Alabama to western New York. The system was largely complete at that point, so Shelby’s move ensured Alabama would get a larger share of the dollars going to that network.

Then came a series of corruption scandals that spurred federal lawmakers to crack down on what many saw as wasteful spending nationwide. Congress banned earmarks in 2010. Two years later, it eliminated funding for the Appalachian highway system amid criticism by legislators such as Representative Jared Polis, a Democrat who now serves as governor of Colorado, who called the Beltline a “zombie highway” and the “Alabama Porkway.”

With those two funding streams cut, the Beltline had to compete for money on its own merits. But the highway was not deemed particularly urgent by the Regional Planning Commission of Greater Birmingham. In a 2006 report, it ranked the Beltline 36th out of 54 transportation proposals, concluding it would do little to ease traffic congestion.

Beltline proponents say the road could help the thinly populated northern exurbs draw the sorts of shopping malls and housing developments that have proliferated to the south of the city since the 1970s. But the Alabama Department of Transportation in 2012 estimated that, once completed, the Beltline would boost the population in nearby towns by just 1.5%.

Environmental groups in 2011 sued unsuccessfully to stop the project, saying the Beltline would harm wildlife like the vermilion darter fish, which is found nowhere else in the world. The highway would cross 125 streams and require construction teams to level more than 4,000 acres (1,619 hectares) of forest.

But business groups and dozens of local politicians continued to advocate for the road. By the time it broke ground in 2014, Federal Highway Administration figures indicated that, at a cost of $5.4 billion, it would be the priciest highway project in the country on a per-mile basis, though subsequent estimates have been lower. State officials estimated at the time it would take 40 years to complete.

Two years later, construction ground to a halt when federal money ran out. At that point, $162 million had been spent to produce a partially built, 1.3-mile (2 km) stretch of roadway.

Most U.S. highways are built with a mix of federal and state money. But Alabama chose not to tap state accounts for the Beltline, instead focusing on maintaining existing roads and expanding capacity elsewhere. No work has been done since.

“People are tired of dribbling money into a black hole,” said Sarah Stokes, a lawyer with the Southern Environmental Law Center, which opposes the project.

On a recent weekday afternoon, signs of decay were evident at the construction site near Palmerdale, a hamlet of 5,400 residents 17 miles (27 kilometers) northeast of Birmingham. Rainstorms had etched gullies into the gravel roadbed, and a 20-foot-tall (6 meters) chinaberry tree sprouted from a concrete retaining wall at the top of a ridge. Tire tracks, trash and a bullet-riddled tin can littered the site.

But patience – and seniority – pay off in Washington. Shelby got funding renewed for the Appalachian highway network in 2019, when he headed the powerful Senate committee that handles spending.

Then came the bipartisan infrastructure package. Lawmakers from Appalachian states, led by Democratic Senator Joe Manchin of West Virginia, inserted $1.25 billion for the highway network into the deal. Alabama is due to get $369 million, the largest share.

Much more will be needed. The Appalachian Regional Commission, a government body, estimated last year that it would cost $3.1 billion to finish the Beltline, and the state said in 2019 that it would take until 2045 to complete just one-third of the road. Experts say such estimates can fluctuate widely due to changing labor costs, interest rates and other factors.

As before, Alabama does not plan to put its own money into the project. Budget experts say that is telling.

“It’s not that critical of a project,” said Steve Ellis, president of Taxpayers for Common Sense, a Washington watchdog group. “Otherwise the state and local interests would have found a way to fund this.”

Birmingham-area officials say they are negotiating for the state and local governments to chip in. Stan Hogeland, mayor of Gardendale, a city of 16,000 residents along the Beltline’s path, believes the road could speed commute times and attract manufacturers serving the state’s auto industry.

“I hope it hurries up and gets through,” Hogeland said.

Others see it as yet another highway designed to steer investment away from Black-majority cities such as Birmingham.

Anna Brown, an activist who sits on an advisory board for the planning commission, said it would be better to send the money back to Washington.

“Everything free ain’t always good for you,” Brown said of the federal funds. “Just because it’s free doesn’t mean it’s going to be beneficial.”

Source
Biden squanders $369 million in tax dollars to revive a ‘zombie’ highway in Alabama is written by Wolf Daily for wolfdaily.com