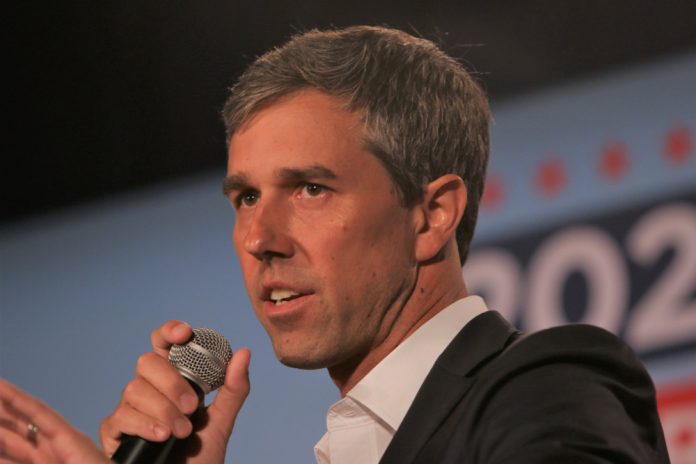 Whereas sane and decent human beings noticed that local and state leaders were gathered solemnly to express condolences, share what they knew, and chart a path of healing, O’Rourke noticed only that most of the elected officials were Republicans and pounced on the shameless and despicable opportunity to turn the death of children into a cheap political stunt.

This exchange sums up the kind of person O’Rourke is – clueless, selfish, and opportunistic to the extreme. Take a look below:

It is hard to think of a more self-absorbed and cruel act to partake in as a politician. O’Rourke was always a longshot in the November election, but this disgraceful performance hopefully means he just lost every independent voter along the way.

No one in attendance was having it. Lieutenant Governor Patrick told O’Rourke that he was “out of line and an embarrassment.”

Senator Cruz responded and told O’Rourke to “sit down and don’t play this stuff.”

Still, the best moments came from Mayor McLaughlin and the rest of the Uvalde community. McLaughlin said to O’Rourke, “I can’t believe you sick son of a bitch would come to a deal like this to make a political issue.” A chorus from those in attendance “It’s on assholes like you! Why don’t you get the hell out of here?!”

On a personal level, it must have been all Cruz, Abbott, and others could do to hold back on the utterly selfish and embarrassing grandstanding of O’Rourke as parents mourned. But, on a political level, they certainly didn’t have to do much else; O’Rourke made sure to expose himself once more as the cheap political hack that he is.

Amazingly, Beta-Male O’Rourke still has cheerleaders in his corner. This includes all of the corporate media, such as CNN. The condemnation of these antics was swift, but so was the support. Here is how CNN covered the grotesque interruption:

“Gov. Abbott, I have to say something,” O’Rourke — a former congressman who represented El Paso, Texas, and is a former Senate and presidential candidate — said as he approached the stage in Uvalde, Texas.

“The time to stop the next shooting is right now and you are doing nothing,” O’Rourke told Abbott. The two will face off in Texas’ gubernatorial race in November.

“You said this is not predictable. This is totally predictable,” he said of Tuesday’s shooting at a local elementary school where 21 people — including 19 children — died, and 17 were injured.

O’Rourke addressed Abbott directly as he left the room on Wednesday: “This is on you, until you choose to do something different.”

This is far from the first time O’Rourke has spoken out about gun violence. The former congressman used his platform during the 2020 Democratic presidential primary to advocate for stricter gun control measures, including a mandatory assault weapon buyback program. His focus on the issue was sharpened by an August 2019 racist massacre at a Walmart store in El Paso.“

Do something different? Stand up for children? What does any of this mean? According to idiots like O’Rourke and mouthbreathers at CNN, it sounds important.