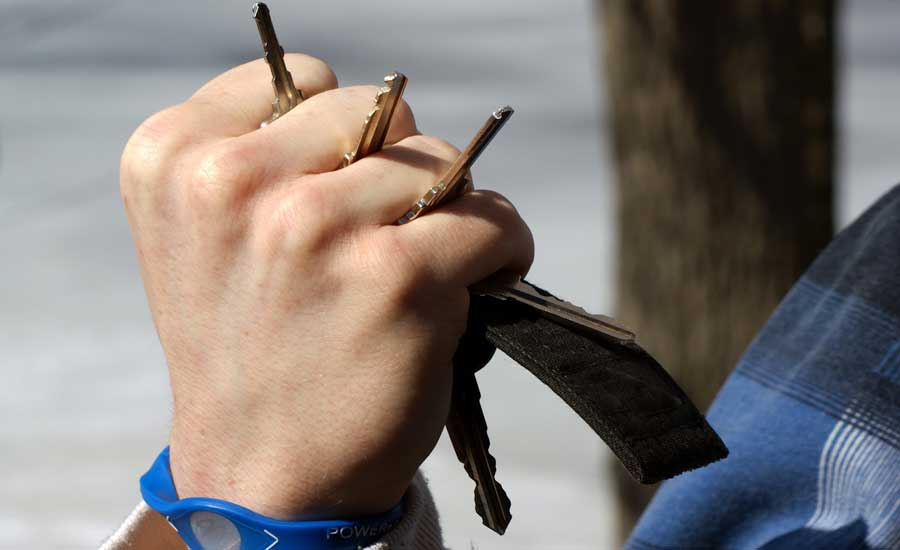 Acknowledging that crime is unpredictable & that you may not be with your gun at all times necessitates knowing the best items to use as a discreet weapon as you go about your daily activities. This is good news for every law-abiding citizen.

The really nice part of this is that these are everyday items we carry about. You don’t have to discreetly carry a bazooka in your pants (is that even possible?) or conceal a spear in your denim jacket. This saves you the unrelenting stares &, more importantly, gives you an advantage over a potential attacker as they would hardly think of whatever you’re carrying as a weapon.

Meanwhile, you may want to take note of the law stating that it is better to hold any item for self-defense than carry nothing at all. A person with a banana has an advantage over a person holding nothing.

4 Best Items to Use as a Discreet Weapon

Your Heavy Set of Keys

Nearly everyone carries a set of keys about. It could be for your house, car, office, or locker — whatever it is, it’s a good weapon. No one will be wary of you carrying a key bunch, and that’s the superb thing about this. An attacker who disregards a bunch of keys in your hands makes a very grave mistake as keys can be very disastrous if rightly used.

If you observe any unusual activity around you or suspect that a person is onto you, hold your key set in your strong hand in such a way that their pointed shafts are poking through your fingers. Maintain your calm demeanor as you do this. As soon as you’re sure of the attacker’s intent, strike in the spot you find most vulnerable & most accessible. A stab to the neck, solar plexus, eyes, or throat will do the job conveniently.

Whoever your attacker is, this is sure to throw him off course & buy you enough time to run or inflict even worse damage — if you can. I suggest that you hit the person in his spots more than twice to be sure of your escape. But, remember, the first strike is the most important.

A Magazine OR Newspaper

If you’re an enthusiast for newspapers & magazines, they may save your life just one day. If you didn’t know of this, I bet you’d be surprised, but your attacker will be much more stunned when you inflict severe damage on him using a newspaper. I believe this is the most discreet weapon you can carry. I mean, who wants to suspect that a bunch of papers narrating today’s entertainment news can be dangerous?

In fact, special forces teach newspaper use to their personnel. A newspaper is called a ‘Millwall Brick” when using it as an improvised weapon.

The catch with the Millwall Brick is that it has to be perfectly executed. PERFECTLY. To use your newspaper or magazine as a self-defense weapon, roll it up tightly so that it feels like you’re holding a piece of little stick in your hand. You have to be ready to strike in an instant, so hold the paper at the tip & as soon as required, strike it wisely at the attacker’s eye, ensuring that it catches his eyeballs directly.

If you’re carrying the type of magazine that is very hard, you can strike the attacker’s throat. You would strike as if you were using a sword & wanted to stick the blade into his throat so that it comes out at the back. You can use a rubber band to keep your magazine tightly folded.

An umbrella may typically be to keep out the sun or shelter you from the rain, so carrying one about, especially during these seasons, would rarely turn a head. Yet, the umbrella is arguably the most lethal item to carry as a discreet weapon.

First, an umbrella can reach farther distances than most other improvised weapons, which means that it is unnecessary to wait until the attacker is extremely close to you before striking them. Keep in mind that the more your reach, the better your chances.

Second, this object can help to take out your assailant completely. You don’t even have to target the soft areas. With the hardness of your umbrella, you can hit the attacker anywhere & see them growl in pain.

To be safer, though, I solicit that you target a soft spot, like his throat, eyes, or manhood. The side of the forehead is also a very deadly place to hit.

By the way, be mindful when shopping for an umbrella to be used for this purpose unexpectedly. Do not choose an umbrella made with air material that will break as soon as you hit someone. Pick a product made of strong, solid metal that would deliver at least five deadly strikes before bending.

A Stick or Cane

A sting cane or stick can be an extremely effective discreet weapon. Canes are generally stylish, so you’d hardly come across as a person interested in self-defense. Rather, you’d look like an extravagant person. To reinforce this belief, only choose a cane that looks like a cane. Avoid canes that look like a weapon. Just ensure that what you select is strong enough with a heavy-duty metal handle.

Your ideal selection is a hardwood cane featuring brass handles. Here’s a tip: the flashier your stick, the easier it is to conceal as a weapon. Fancy items get you the attraction, but no one thinks of them as a weapon. You may want to demonstrate a subtle limp whenever you carry a cane to clear all doubts.

I think it may be necessary to remind you that a heavy strike to the head with a brass handle is powerful enough to make a man stagger but inadequate to make him pass out. So, when you deliver the first blow to the head, deliver another & another before another, each of which has to be deadlier than the last.

Concluding The Best Items to Use as a Discreet Weapon

Carrying an object you can use as an improvised weapon is recommended at all times. You may be attacked in a place that does not allow carrying a gun. You, as a prepper, have to prove that you’re ready for all events.

Without a doubt, violence is bad. But you should never watch while others practice it on you. In subsequent articles, we’ll look at other best items to use as a discreet weapon. Until then, let’s hear of your experience using any of these items as improvised weapons.

7 Winter Survival Foods To Grow In Your Garden