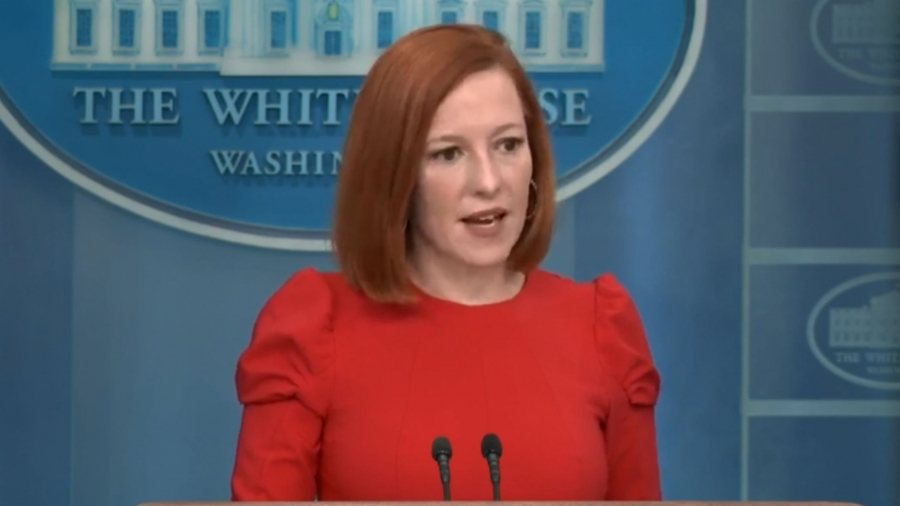 White House Press Secretary Jen Psaki was given the unenviable task of cleaning up President Biden’s messes from a Wednesday press conference marking his first year in office.

When Psaki was confronted over Biden’s mixed signaling to Russia Putin that appeared to invited a “minor incursion” into the country — leaving diplomats scrambling — she appeared to make matters worse by sending a confusing message of her own. Watch:

“One, President Biden has repeatedly said the words from a president matter. So why isn’t he more careful with his remarks?” a reporter asked.

“And I think what’s important to the American public — and tell me if you agree or disagree — is what the President’s positions are and what he means,” she continued. “And that’s exactly what he provided directly this morning.”

The Press Secretary’s attempt at dodging the response thus points the American people back to Biden’s botched remarks that began the international debacle. It is the opposite of inspiring confidence: The message is that Biden’s diplomatic signaling may change from day-to-day and moment-to-moment and people are supposed to take the president’s remarks at face value.

That is apparently why they keep Biden in the basement, proverbially speaking, and he only rarely gives press conferences.

On Wednesday, the president has made the head-scratching comments, which had lit up social media, as well as the diplomatic channels.

“It’s one thing if it’s a minor incursion and then we end up having a fight about what to do and not do, et cetera,” Biden said. “But if they actually do what they’re capable of doing with the force they’ve massed on the border, it is going to be a disaster for Russia if they further invade Ukraine.”

On Thursday, Biden sought to clarify remarks about what he meant by a “minor incursion” from Russia into Ukraine.  The comments “appeared to undermine weeks of intense U.S.-led diplomacy aimed at stopping an invasion of the former Soviet republic,” the Washington Post noted.

“Officials in Kyiv reacted angrily to Biden’s comments at a news conference Wednesday in which he appeared to wobble on backing Ukraine if it were attacked by its larger neighbor,’ WaPo continued. “An array of U.S. lawmakers and world leaders also expressed dismay at Biden’s comments, with some saying the president appeared to offer his Russian counterpart a green light to launch a limited invasion.”

On Thursday, Biden insisted he has been “absolutely clear with President Putin. He has no misunderstanding. If any — any — assembled Russian units move across the Ukrainian border, that is an invasion … It would be met with severe and coordinated economic response,” he said.

The U.S. president’s bumbling remarks are not merely fodder for critics, they may accidentally cause an international crisis. If there was ever a time for a president to step down for the good of the country, this might very well be the time.